» Home / Articles / Reviews / The Dark Side of the Moon review

Review for The Dark Side of the Moon

The dark side of the moon is that part of the lunar celestial body that always faces away from earth; while technically no darker than the visible side, it’s dubbed as such because it was unseen by human eyes until a few decades ago. It also happens to be the name of one of the bestselling albums of all time (although I’m pretty sure the actual moon thing came first), as well as an acclaimed 1998 sci-fi adventure. Not to be confused with that earlier release from SouthPeak, it’s also now the title of an atmospheric FMV game from Tayanna Studios. This cheesy interactive sci-fi movie is worth a look for some of the acting, the ridiculous (but fun) plot and the scenic setting, but don’t expect a lot from the limited gameplay.

The game is set in the (fictional) English village of Marywine, where we learn from a local news report that tourists are about to descend there in order to get a good view of the upcoming solar eclipse. We find our protagonist Dean Hamilton at home on the sofa whilst his children are upstairs in their bedrooms; his ten-year-old daughter Ruby, who’s been troubled by nightmares recently, and Andy, his video-game-loving teenager. His wife is mysteriously absent, which we find out during a rather unconvincing scene in which Dean talks to a photograph taken at their wedding – ‘Why did you have to go, Sarah? Why?’ Cut to a sun-drenched flashback where Sarah is working in the garden and Dean is sitting around drinking a beer, and we learn that he’s ‘treating’ her to KFC for their anniversary meal. Sounds like a real catch.

Back in the present after a few too many brews and passing out on the couch, Dean awakes to find his children have vanished without a trace. Frantically searching the town, he briefly encounters a jittery bespectacled lady named Alyx who clearly knows something she’s not letting on. Soon, though, their paths cross again, and Alyx shares her wacky-sounding theories about alien abductions and their links to significant solar events. Could that really be where the children have disappeared to? Newly armed with wildly improbable explanations, it’s down to Dean to find out the truth and quickly, or risk never seeing his family again. 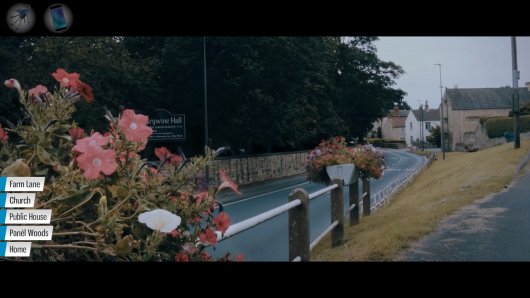 If it sounds a little bonkers, it is, though endearingly so, with the tone dancing between that of a more serious thriller (as evidenced in what the game refers to as the ‘goose chase’ scenes where you’re following a trail of clues via a series of threatening notes across Marywine) and a tongue-in-cheek sci-fi B movie (why wouldn’t a solar eclipse be the perfect time for aliens to extract DNA from us?).

Lead actor Darren Hall (who plays Dean and is also director and writer) doesn’t do a terrible job, but he sometimes comes across as a little insincere and without the level of emotion you’d expect from someone whose kids have just gone missing. His friend Julian is worse, with the same level of acting chops you’d expect if you’d randomly pulled in a stranger from the street to help – though he only appears relatively briefly. Thankfully, the inclusion of the excellent Rupert Booth (somewhat of an FMV veteran, having appeared in Contradiction: Spot the Liar! and The Shapeshifting Detective) as the ancient evil being Gedeon saves several scenes which would otherwise have felt disappointingly amateur. Sure, he’s a little hammy, but always fun to watch, whether it’s sniffing menacingly or waving a knife around with glee. Anarosa Butler (who also starred in the aforementioned games) is convincing and amusing as the goofy and geeky paranoid conspiracy nut Alyx.

The cinematography is also a little bit of a mixed bag. The film quality is decent and professionally produced, and there are some nice scenic establishing shots showing aerial views of Marywine. The perspective is a blend of standard third-person cutscenes and first-person interactive elements (which we’ll return to in more detail later on). The latter, unfortunately, has too many wobbly-cam shots, presumably for immersion but this isn’t a found footage movie and I didn’t find it added anything. There are also a lot of extremely tight close-ups (particularly in scenes featuring Alyx or Gedeon), so much so that you’re practically staring at the actors’ pores for an extended period of time. 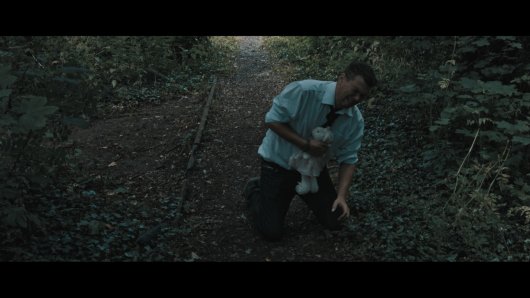 Though the areas Dean explores are mostly filmed on location, there are a couple of places where the game switches to relatively basic 3D graphics. For the scenes in the final act, based in a building reminiscent of a space station, this makes sense, as building a set from scratch would have blown the budget. More puzzling is the fact that this method is also used for an underground bunker scene, which is basically just a dark room with a couple of chairs, a table and some bookcases. The juxtaposition between the CG graphics and the live action is sometimes jarring.

The scenes are generally accompanied by unsettling slow background music at the start to build the mood, with soft background synth chords to maintain the sense of wrongness. As the game progresses and the stakes increase, it shifts to tense orchestral-sounding tracks. There’s nothing that really stands out, but it’s more than competent and feels appropriate for a suspense movie. Suitable sound effects are present in the filmed sequences: gently creaking stairs, twigs breaking, turnstiles squeaking, and the bleep bloops you’d expect from a hi-tech facility. However, a lot of the short transition shots of Dean moving from one area to the next (as you explore the village) feel rather odd, as the wind swishes through the trees while Dean runs across stone steps in complete silence (with the exception of the background score).

The minimal interface is as straightforward as you’d expect of a live-action film. Once you reach a point in the storyline where a choice is required, the options are displayed to the left and it’s as simple as picking on the one you’d prefer, sometimes with a time limit to press you into making a quick decision. There’s no need to worry about saving, as the game autosaves on a regular basis – exactly how often was unclear to me, but I exited and returned to the game on a number of occasions and didn’t lose any progress. 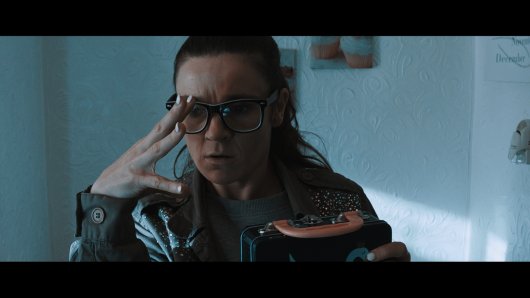 The choices are simple and innocent enough to start with (take out the trash or say goodnight to your kids?) but soon become more meaningful, forcing you to decide who you should trust and how you react to police interrogation. Will you remain level-headed or will you lash out? The core story remains the same regardless, although there are five different endings that you can get. I saw one of them, and it wasn’t clear to me how to unlock the rest. The ending sequence can be easily replayed by selecting ‘resume’ after the credits have rolled, but I tried the different late-game options and none of them seemed to lead to a different outcome. I’m assuming different choices earlier on may produce a different finale, but since you can’t manually save, if you want to try out different choices you’ll need to replay the whole game. At least you can skip scenes to speed up the process, but I had no desire to start over from the beginning to see.

These traditional FMV storyline choices are fused with more adventure-like control of Dean. When not in a cutscene, the camera switches to a sort of swaying first-person view, with movement options presented on the left (such as ‘go to hallway,’ ‘leave house,’ ‘forward’). When you’re in a location with something you can interact with, an indicator will appear at the bottom right, and clicking on that will cause Dean to pick something up or inspect it. Items you acquire as you explore appear at the top of screen, and clicking on one of them will prompt Dean to describe the item or, if you’re in the right area, use it with no further prompting.

Having the ability to control the protagonist this way made the experience feel slightly more than just an interactive movie, although I would really have preferred to not have the nausea-inducing wobbly camera shots whilst investigating his surroundings. This camera shake only exists in some areas, not others, which makes the stylistic choice even more perplexing. Marywine is certainly a picturesque place, but the lack of a quick-travel map led to a fair bit of backtracking around the village, as I felt I needed to frequently revisit the church, pub or country lanes to see if there was now anything that I could interact with. 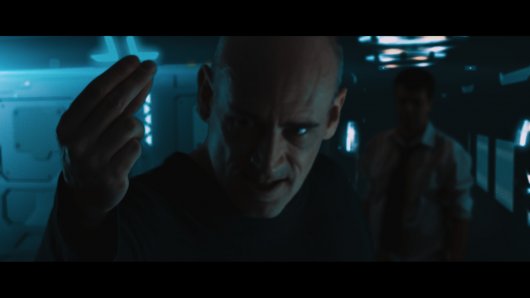 Other mechanics include a phone that you pick up early on, allowing you to watch some clips of Sarah before she disappeared, and to call one of Dean’s contacts at the right points in the story. Similarly there’s the children’s laptop, on which you can view Ruby’s search history and browse through a couple of old photos. Accessing the laptop in the first place requires some extremely basic inventory-based puzzle solving. Later there is a point where you pick up a metal contraption with lettered rings that requires a code word to solve, and there’s a button-pressing conundrum to unlock a door right at the end. That’s about the extent of your interaction, though – this game is not one to be played if you’re looking for puzzles (or a challenge).

The plot may be silly and there’s not much to do, but if you’re willing to suspend your disbelief and just roll with an over-the-top sci-fi thriller, The Dark Side of the Moon is decently entertaining for a short diversion, with a playtime of around two to three hours, or more if you want to replay it to choose different options. There’s not enough that stands out to tempt me into a return trip, but it’s fun enough for an evening out.

The Dark Side of the Moon may be worth a look if you’re able to enjoy a low-budget interactive movie full of sci-fi silliness, but the experience is let down by the relative lack of interaction and challenge.

GAME INFO The Dark Side of the Moon (2021) is an adventure game by Tayanna Studios released in 2021 for Linux, Mac and PC. It has a Live Action, Photographic style, presented in Full motion video and is played in a First-Person perspective.