Review for The Almost Gone

Note: Since time of writing, an update has introduced a minimap feature. This review is based on the original launch version.


Towards the end of The Almost Gone, a narrative puzzler with a minimalist isometric art style similar to Monument Valley, you must use a series of tubes to send a canister towards different objects in an abandoned hospital—objects that can’t be reached normally. The interconnected tubes stretch from room to room, occasionally wrapping around walls that force you to rotate your view of the diorama-esque environments to see where they join. In a game that makes thoughtful use of metaphor to tell the story of a young girl’s spirit discovering the connections that made up her life, there are few puzzles that could serve as a better late-game thesis statement. Even before then, the best moments intertwine gameplay and storytelling elements in a way that brings a welcome sense of depth to both. While the frustratingly small size of the environments and some narrative missteps drag down the experience somewhat, this is otherwise an engaging game that nicely balances its elements in a creative and surprisingly emotional way.

You follow Emily, a recently-deceased young girl in what seems to be purgatory, as she revisits scenes that were significant to her to discover the truth about her life—and death. Devoid of any other people and often damaged by large tree branches bursting through walls and floors, the places that you used to know are now ghosts of themselves, at once familiar and disconcertingly unreal. As you search a handful of locations, including your house, your neighborhood, and your grandparents’ home, unpleasant family secrets begin to emerge and form a larger picture of your life story. With each new detail, you begin to see the connections that have impacted your life—connections across time, place, and your family tree. 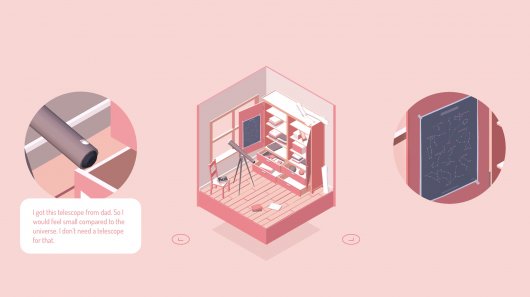 The Almost Gone rewards exploration with the protagonist’s comments about certain items that often reveal new pieces of the narrative or provide bits of backstory that further deepen the characters. Though the focus is mostly on Emily herself, we’re also given intimate looks into the lives of her family members, such as learning that her father and grandfather were architects that both hoped she would follow in their footsteps.

It’s difficult to summarize the story without spoiling many of its major plot points, but suffice it to say that the game deals with topics including child and substance abuse, animal cruelty, and mental illness. These themes aren’t all deeply examined during the game’s brief runtime, but they are all handled respectfully and naturally woven into the plot. The writing, courtesy of Belgian author Joost Vandecasteele, is effective if a bit too straightforward at times—some of the more emotional discoveries might have packed a bigger punch if they weren’t spelled out so clearly in the dialogue. Other moments, however, are happy to leave things unspoken and up to the player’s interpretation. It’s a strange back-and-forth that doesn’t do the game any favors.

You’ll spend most of your time clicking around in the small 3D dioramas and solving inventory puzzles, though there are some challenges that break from this format, like the aforementioned example with the interconnected tubes. Navigating between rooms is done by clicking on arrows pointing in various directions, or by clicking on doors and elevators when available. Many puzzles and clues require you to rotate the room to see behind objects and in corners, a mechanic that isn’t really utilized in any unique ways, unfortunately. Your inventory is accessed by right-clicking, and rotating the room involves a simple click and drag. 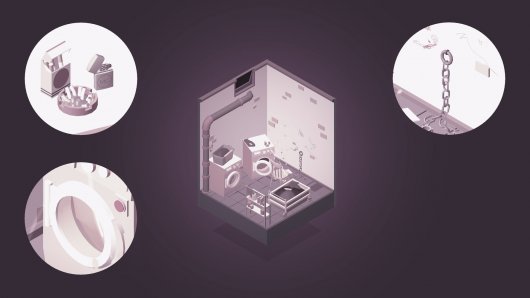 In each of the locations you visit, the doors are mysteriously locked, and you’re searching for a way out. This is where most of the puzzles come in, though I wouldn’t call this an “escape the room” game, as the actual escaping takes a backseat to environmental storytelling and more traditional adventure game tasks. The puzzles are generally logical and feel appropriately difficult, with a few providing that satisfying “a-ha!” moment when I figured out the solution. One type of obstacle, featured a few times throughout, allows you to travel back in time to collect clues in the past used to solve a puzzle in the present. These tasks do a good job blending the narrative and puzzle solving, revealing some intriguing plot details as you poke around the past version of your environment. I would have liked to see more non-traditional puzzles in that vein, but what’s here is solidly enjoyable.

Though I was generally happy with the gameplay, there are some flaws in this department that hold the game back. For starters, the environments are centered in the middle of the screen, surrounded by empty space, and they’re so tiny that it can be difficult to make out small objects, which often led to pixel (polygon?) hunting as I tried to discern what was actually important in a given scene. A simple zoom function would have gone a long way towards rectifying this issue, but there’s no such feature that I could find. These design choices seem better suited to the mobile version of the game, as I could see it feeling more at home on a tablet or the Nintendo Switch than on PC. The game does somewhat take advantage of the extra real estate with close-ups of certain objects that pop up to the sides of the main environment, but even with this there is no reason for the actual rooms to be as small as they are.

I also found it frustrating to navigate around some of the larger areas, as once you’ve gone to another room and rotated it a few times, it’s difficult to reorient yourself and return to the room you started in. Puzzles requiring travel between multiple areas became tedious as I tried to remember the way back to where I just was. I’m not sure what the solution to this would be—a mini-map or even a simple compass would have been a helpful addition, or if nothing else, perhaps just including fewer puzzles that need backtracking when your sense of direction is constantly changing. 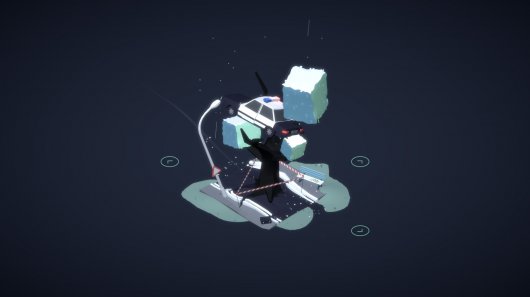 The graphics are simple, clean, and effective at imbuing each of the locations you explore with their own unique sense of place. Color palettes change—from gentle pastels to cold shades to vintage sepia tones—between each of the game’s five acts, and there are personal items, documents, and small details to be found on almost every screen (another reason a zoom function would be much appreciated). There are no characters visible, though simple animations such as burning flames and slowly growing tree branches are handled well. Overall, the visuals are nicely done and serve the story and gameplay here, even if they didn’t necessarily blow me away, save for a few moments: scenes featuring a mysterious black…something that oozes into the room as the color drains from the screen were particularly memorable.

The artistic presentation is complemented by an eerie, dreamlike soundtrack. Composer Yves De Mey’s music is subtle when present, enhancing the atmospheric quality of the sound effects and the foreboding tone that permeates much of the experience. Listening to the score on its own could have fooled me into thinking it was for a horror game; in particular, the track “Apartment,” with its reverb-drenched percussion and ghostly background vocal, would not feel out of place in a modern thriller movie. There is no voice acting, but I didn’t find the lack of human speech a detriment to the storytelling. Its absence only strengthens the desolate atmosphere; in a way, I think that spoken dialogue would make the game feel too comfortable, too “normal” in a way that undercuts its eerie tension. Besides, there isn’t a huge amount of text to read through—especially not when compared to your average adventure game.

The Almost Gone is not a long game, clocking in under three hours for me, but I wasn’t upset by the short play time. The storytelling isn’t perfect, and I absolutely think it could have benefited from another hour or so to dive deeper into its complex themes, but by the time it wrapped up I felt satisfied. The ending is certainly left open for interpretation, though not so much as to feel frustratingly vague. Overall, Happy Volcano’s isometric adventure is a flawed but unique experience that is worth the time for those seeking a game that blends an emotive narrative with enjoyable puzzles.

The Almost Gone is available at:

Though it doesn’t explore its heavy themes as deeply as it could, and the needlessly small environments are overly restrictive, The Almost Gone is an enjoyable isometric puzzle game with an engaging, sensitively explored narrative.

GAME INFO The Almost Gone is an adventure game by Happy Volcano released in 2020 for Android, iPad, iPhone, Mac, PC and Switch. It has a Stylized art style, presented in Realtime 3D and is played in a Third-Person perspective.