The subject of hacking has always been fascinating to me—perhaps partly because the skill set usually seems beyond my comprehension, but mostly because I’ve always been jealously fascinated with the so-called “white hat” hackers, those with the incredible knowledge and talent to invade a computer system but who use those skills only for good. Though a white hat surely has what it takes to turn to the dark side as a “black hat” (a malicious exploiter of technology with only their personal gain in mind), their ethical code and good intentions are unmoved by the lure of ill-gotten gains. These contrasting types of hackers were so named for the black and white Western films, where the hero and villain normally wore opposite-color hats to symbolize the contrast of good versus evil.

In the late 1990s, the term “grey hat” was coined to represent the murky middle in hacker ethics—those who are willing to break rules and intrude without prior permission, but only with noble intent or performed under threat or pressure from other individuals. Such motivations could be stopping a criminal or exposing the misdeeds of a public figure. The 2020 hacking simulator GREYHAT, created by indie developer Leon Lim under the banner of Limited Games, is a deep dive into the world of a morally dubious hacker (in fact, one of the “most prolific hackers in modern history”), working his hacking magic in a desperate attempt to reunite his family. His quest takes you on a series of fun hacking adventures, though it’s ultimately weighed down by very clunky storytelling.

GREYHAT begins with an attempt at emotional investment into your unseen character, by asking you your online nickname and your first and last name to attribute to the protagonist. The entire game is spent in first-person view at a computer terminal. Much of this time involves your character’s personal desktop in a Windows-style interface, alternating between reading e-mails and participating in instant message conversations through an encrypted chat module called ViTRiOL. As the story proceeds, you’re repeatedly pulled into situations that require you to use your skills: the hacking sessions, where you abandon your rather boring desktop and find yourself probing the computer of someone else—generally someone who seems to be long overdue for the consequences of some quasi-ethical hacking. 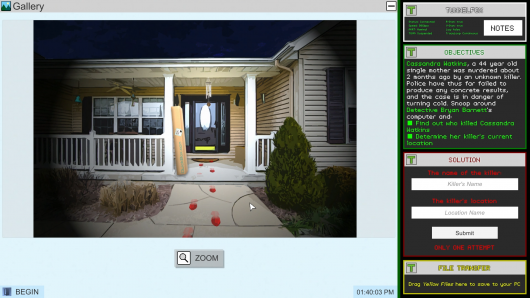 Once you have entered the required IP address and tunneled in to access the desktop of your target, your goal is immediately made apparent. Perhaps you’re attempting to reverse the results of a corrupt professor who has manipulated a student’s grades, or maybe you’re digging for dirt on a US Senator who is abusing his power. Maybe it’s more serious; some cases involve a timed threat of terrorism or other violence against innocents that you’re trying to prevent by learning certain facts. You’ll have access to the target’s e-mail inbox, a web browser, a desktop file folder that is almost always password-protected, and other scenario-specific programs such as a cellphone tracer or a webcam. The first step is to use every available e-mail, document, and image to start gathering information, and generally the crucial moment of each assignment is when you use the provided password hint to unlock your victim’s protected folder.

Finding this data requires patience and a real eye for detail. An early mission, one of the easier ones, involves you needing the first name of your target’s wife to break into their password protection. You have access to five female names (since your mark has produced quite a stable of daughters) and five pictures of females who appear approximately the same age. The only way to determine which name belongs to the wife is to pay close attention to every bit of information in e-mails, unprotected documents, and other available programs such as a personal calendar, before eventually you can eliminate all the other names and determine which one is correct. You can’t just guess, either; multiple wrong answers will lock you out and you’ll fail the entire scenario.

This all sounds fun, and it is, but there is no story DNA present in any of the missions; instead the plot is developed between these missions through a series of interminable ViTRiOL chat sequences. I wish to give as little weight to the narrative as possible, so I’ll keep it fairly brief and spoiler-free: your young daughter Emily, whom your world clearly revolves around, is kidnapped in the prologue. The game picks up many years later as it becomes apparent that she may still be alive. Only through an extensive series of assignments given you by a mysterious figure who doles out small bits of information to you about Emily’s new life can you have any hope of locating her. It’s a premise rife with possibilities for tense exchanges between aggrieved father and merciless kidnappers, but imagine that story being told in a way that makes it extremely easy to not care at all what’s going on, and you’ll understand why I’m not interested in making it a focal point. 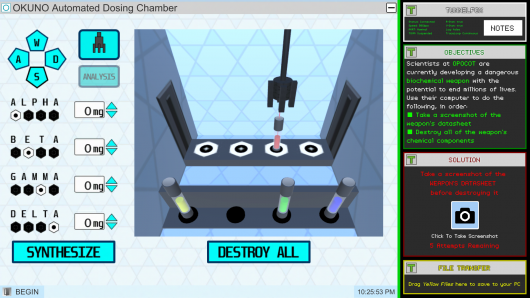 These between-mission chat sequences seem like an opportunity for some choice-based mechanics, but instead of providing dialogue options or even a wider variety of emotions to choose from, your response is simply binary: negative mood or positive mood, as determined by the first key you push when it’s your turn to talk. Pushing one on the left side of your real-life keyboard sets your emotion to negative; a key on the right side makes you positive. Then, in order to continue advancing your character’s text, you literally have to just push any random key on the keyboard as though you’re typing. I can’t even imagine why this seemed like a good idea, but prepare to spend a significant amount of these dialogues randomly bashing the keyboard to prompt more words.

There appears to be no consequence at all to a positive vs. negative mood, and since most of these conversations are with fairly evil characters who are blackmailing you into your hacking assignments, or otherwise threatening you or your daughter, why exactly would your choice be “positive mood” in that situation? It’s an unfortunate example of player agency actually being a hindrance to the story, or a moot point at best. Even for the characters who are supposed to be your friends or allies, the writing does not effectively convey any likeability, and as a result essentially everybody in this game feels like an antagonist.

These protracted text conversations between missions are really an unfortunate distraction from the hacking sequences that are the meat of the game, and as the game continues throughout its fifteen “levels,” that meat becomes progressively tougher—I was in a fairly self-congratulatory mood after the first two assignments, but the difficulty curve ramps up rapidly. One later task involves scrutinizing all kinds of details to figure out who committed a crime out of five suspects. These details involve interview logs, personal calendars, and audio recordings, and you’ve got to be keenly observant to correctly identify the pieces of information required. 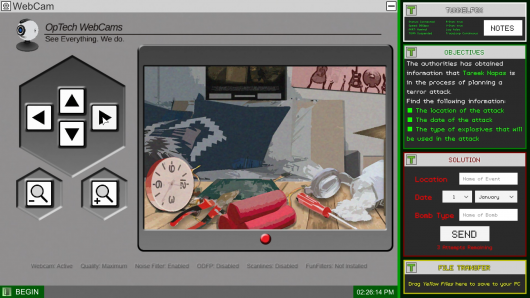 The missions do have a fairly good hint system—actually, two hint systems that you can switch between through the game settings: “Cryptic” and “Obvious.” Each job provides you with three fortune cookie hints, which are documents available to you through the desktop of your hacking target. The cryptic ones will generally do the trick in the earlier missions, but the obvious ones may be necessary as you proceed through the game. At times even the three so-called “obvious” hints don’t fill in all the gaps when you have to assemble a collection of clues in the final missions.

By this time in the game, unfortunately, my enthusiasm had started to wane due to the plodding nature of the dialogue interludes, and I was losing interest in the story rapidly just as the hacking was getting difficult. The game ultimately took me over twelve hours to finish, but at least a couple hours of that is story fat that could have been trimmed in service of the game’s real strength.

GREYHAT is an odd game that brought out plenty of different feelings in me. While playing the hacking sequences, I was invested in my current case and locked into my clue-hunting skills, and I felt legitimately smart when I finished the late-game sequences. Between those sequences, while pounding my keyboard endlessly to slog through the chat and trying to remember which hacker alias in my chat window belonged to whom and how they were relevant to the overall plot, I kept losing interest. It is clearly a labor of love from a one-man independent studio, but its issues are not one of limitations but rather overreach. The game is just too long, with too many missions and too many momentum breaks. Half of it shows clear promise from a creative indie developer that warrants a leaner, tighter sequel. The other half really needed some constructively critical playtesting, and should be sent back to the drawing board and re-engineered entirely. Perhaps the overall life lesson here is that hacking, whatever the ethical consequences may be, is still pretty darn cool—but much more tolerable when you don’t have to keep talking to people.

During the hacking portions, you’ll feel smart and invested in your detective work. During the story/chat portions, you’ll likely find yourself often bored, distracted, and wondering how much longer you’ll have to keep smashing random buttons on your keyboard. GREYHAT is a game with a great concept and many good ideas that needs to de-emphasize its weak parts and focus on the well-realized fun of hacking into other people’s computers.

GAME INFO GREYHAT – A Digital Detective Adventure is an adventure game by Limited Games released in 2020 for PC. It has a Illustrated realism style, presented in 2D or 2.5D, Illustrated text and is played in a First-Person perspective. You can download GREYHAT – A Digital Detective Adventure from:
The Good:
The Bad:
The Good:
The Bad:

What our readers think of GREYHAT – A Digital Detective Adventure