'Enypnion' may be an unfamiliar word to you, as it was to me; it almost sounds like someone tried to create a portmanteau to describe an encrypted onion. Pronounced en-OOP-nee-on, it’s actually an ancient Biblical Greek term that means ‘dream.’ Which makes it a very apt title for Sinking Sheep’s beautiful and surreal, if brief and somewhat superficial point-and-click adventure set entirely in a dream.

Our adventure begins with a boy named Jonathan soundly sleeping in bed when he is visited by a small ball of light with even smaller spheres of brightness bubbling next to it in constant motion, forming a sort of tail. This, we’re told, is a ‘dream bearer’ who’ll be taking the young protagonist on a journey and will help by offering guidance, interpreting the odd surroundings he’s about to encounter. We also hear that everything in the dream world has been created by Jonathan’s mind. But before that transition happens, in a brief cutscene we see glimpses of the child’s room that foreshadow some of the elements that will be apparent in his sleep-created land: a picture of him on a fairground horse, chess pieces and toys on the ground, and books titled ‘Haunted Mansion’ and ‘My First Electric Circuit’.

This subconscious adventure will take Jonathan through a foggy forest and eventually to a sinister-seeming castle, ruled over by a giant-sized queen and her counsellor. We’re warned by a talking squirrel early on that the queen is quite mad, and she’s certainly … unusual. Her head isn’t on her shoulders where it belongs, but instead rests on one of her hands – this goes some way to explaining why she doesn’t seem to think that decapitation is a harsh enough punishment for merely thinking about stealing a cookie. Once you find yourself in the cruel queen’s clutches, it’s time to escape, navigating your way through caverns, rivers and forests, avoiding the queen’s guards and seeking someone who’ll help you in this weird world. 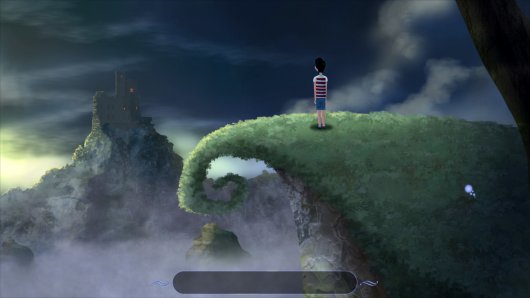 It’s all quite curious and offbeat, and the soundtrack adds to that strange feeling throughout. Right from the title screen the background music has an ethereal quality, with slowly changing tones that feel off somehow. In the brief scene at the start in Jonathan’s room, the tune becomes lighter, lilting and more lullaby-like, before switching back to serene and surreal fantasy tones as you plunge into the boy’s dream land. It really does an extremely effective job of enhancing the otherworldly feeling. The atmospheric tracks are accompanied by the occasional sound effect of bubbling soapy water, shattering rocks and satisfying clunks when you pick up an item.

As with the developer’s previous game, Yet Another Hero Story, the characters and backgrounds here are quite beautiful, with a hand-drawn style and an abundance of purple and yellow hues. Specks of light and dust float to and fro, as does the occasional insect, and mushrooms with cartoon faces blink quietly. It’s playfully childlike and surreal at the same time; the first scene in the dream world, for example, features a mechanical horse-ride overgrown with moss and vines, connected to an empty glass bowl. With a little puzzle solving, these things can be brought to life, accompanied by a brief rendition of a plinky fairground-style “Turkey in the Straw.”

A hint of mist hangs in the air and some of the ground and flowers in this land seem daubed on, further contributing to the magical, ethereal atmosphere. Once you’ve puzzled your way through a large gate, you’re greeted by an unmoving scarecrow with buttons for eyes, firmly gripping a scythe and a lantern powered by a glowing bug. Unmoving, that is, until you try to take its scythe and it opens a mouth full of jagged teeth and growls at you. It’s more than enough to draw you into this strange world, even if it’s not initially made clear why you’re there (more on this later). In between the beautiful backdrops are occasional comic book-style panels that act as cutscenes – sometimes with a little basic animation – and help drive the plot forward. 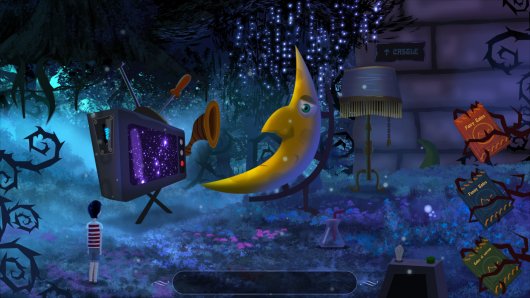 Jonathan himself is oddly static. Perhaps this is to reflect the fact he’s actually sleeping soundly in his bed, although seeing him with his back turned and stiff as a post in every scene is a little jarring. It’s not possible to move him around any of the screens, either, with the exception of a couple of puzzles. Navigating from place to place either happens automatically, or where there are multiple backgrounds in an area that you can move to, sliding your cursor to the edge of the screen will bring up a glowing clickable arrow.

The dream bearer itself is actually integrated into the gameplay, acting as a living cursor. Hovering our little light friend over certain items will cause it to brighten and a label to appear towards the bottom of the screen (which is helpful, as there’s no hotspot highlighter). Left-clicking at that point will prompt your guide to provide a description or occasionally zoom into an area for a closer look. Right-clicking will switch modes, turning the cursor into a hand with an animated grasping movement when on an area of the screen you can interact with. One slight irritation is that the game doesn’t stay in this interaction mode after you’ve clicked on something; it switches back automatically to the cursor being the dream bearer again. Essentially, if you want to click on a number of different things to interact with (for example to try picking them up), you’ll need to keep switching into the interact mode. The majority of hotspots are required for progression, however, as there’s not much in the way of background items for world-building purposes only.

When items are picked up, they’ll go into your inventory, which is a small (always present) area at the bottom of the screen. Clicking on something in your possession (in any mode) will turn the cursor into that item, and you can then attempt to use it with various other things around you. Right-clicking returns it to your inventory. It’s pretty intuitive, although the game does also provide some on-screen instructions about the controls to get you started. Options are limited to basic audio adjustments, while the manual save system is pretty standard with multiple slots provided to use if you wish. 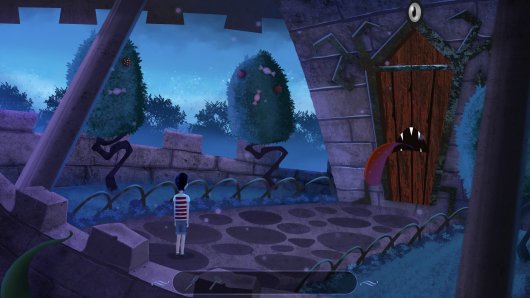 Though there are objectives that can be deduced easily by the context – open the large imposing gate, get past the thorns, or attract a bunny hiding in the bushes – Enypnion seems to be missing an overarching goal. It’s not clear at first why this dream bearer has arrived or what you should be striving for in this strange world, other than to explore and satisfy your curiosity. There’s a sign that says ‘castle,’ so it feels instinctively like that’s where you should try to go, although you won’t know why.

Achieving these almost purposeless-seeming objectives is relatively simple, as you never really have that many items to experiment with at any one time. Often the solutions involve interacting with objects, picking things up and using them where you can (although there’s an occasional need to pixel hunt). Most of the puzzles are as surreal as the visual style: at one point you use a machine to read a series of books to provoke reactions from an anthropomorphic moon, even if the reason is not immediately apparent. Soon enough the moon will weep a ‘cry drop’ – which is a rather odd way of saying ‘tear,’ although I’m not sure whether this was intentionally or accidentally strange. There are a few other instances of clunky English or possible typos: “Do you have anything to say on your defence?” and “I will think of a much worst punishment” being a couple of examples.

While many obstacles are of the inventory variety, there are certainly a decent variety of creative puzzles as well, though most shouldn’t prove too taxing to anyone experienced with point-and-click games. One puzzle is in the form of a short riddle-style quiz administered by a mysterious creature through a hole in a door, with dialogue options to answer. Don’t worry though, as you can always try again if you’re not correct the first time. The rest of the game doesn’t offer any such choices, though there are a few short conversations with some of the curious inhabitants of this world, such as the aforementioned mushroom-loving squirrel and a four-armed, pointy-eared pirate who offers tours of a different castle that you later discover, which thankfully is ruled by a kinder queen. Unfortunately, none of them are voice-acted. 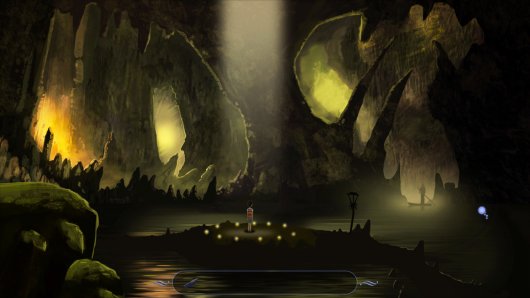 Another later puzzle once you’re inside the castle switches the perspective up a bit, with Jonathan facing the side in a room full of levers and doorways on platforms. The levers open and close drawbridges, and once closed a click will transport you across each bridge to move around the screen. It initially looked like it may be a fairly complex puzzle, but ultimately it isn’t – half of the levers don’t even need to be used in order to make it through the series of doorways.

This is immediately followed by a room dominated by a checkered floor and three giant chess pieces, where the objective is to move yourself square by square, avoiding getting sliced by any of the pieces. This is a little more challenging, and I needed some trial and error to understand the rules. Thankfully the game automatically resets the board if you make a mistake. Another room contains the aforementioned tempting cookies under a glass dome, along with a piano that is part keyboard and part toy monkey, which you’ll need to deal with in order to get to those sweet and delicious-looking snacks. 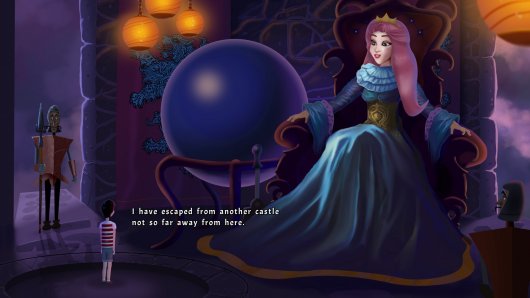 As I said, it’s not readily apparent why you’re here in the first place, but thankfully after you’ve visited both queens – the cruel and the kind – everything wraps up with a satisfying ending that sheds light on what’s been going on inside Jonathan’s head. This caps off a neat and simple, self-contained tale that’s fairly brief with around one to two hours of playtime. If it had been a little longer, there might have been the opportunity to flesh out some of the characters more, particularly Jonathan; as it is, it’s too fleeting to really get to know them or feel invested in their stories.

Overall, Enypnion is a charming experience suitable for the whole family and certainly a visual treat, though a clearer purpose early on may have been helpful to get players more interested in the plot, or at least have a better idea of their larger aims. Although most of the puzzles are not particularly difficult, they are at least varied enough to keep things interesting through to the end. Ultimately, it’s an enjoyable enough couple of hours in an enchanting and strange world, but much like a dream, I expect my memory of it will likely fade soon.

A brief, simple point-and-click adventure set in a child’s dream, Enypnion is beautiful and charming while it lasts but without enough depth to truly be memorable.

GAME INFO Enypnion is an adventure game by Sinking Sheep released in 2020 for PC. It has a Stylized art style, presented in 2D or 2.5D and is played in a Third-Person perspective. You can download Enypnion from:
The Good:
The Bad:
The Good:
The Bad:

What our readers think of Enypnion