Under That Rain: Episode One

"Do you really want to discover the upsetting truth?" asks the tagline for Come Back: Chapter 1. The developers at Team NoLan have chosen to tackle the subject of domestic abuse, an uncomfortable theme that stands out against the serene, hand-drawn art style in which it’s presented. There can be real dramatic impact in a serious story told with a simple, almost whimsical art style; unfortunately, the first installment of Come Back doesn’t manage to use that juxtaposition to great effect. The story teases a deeper exploration of the abusive relationship at its core, but this short and very simple series debut only skims the surface, in more ways than one.

Come Back begins with you opening your eyes to an empty beach scene, a piano tune playing over the sounds of crashing waves and squawking seagulls. A bottle floats near the shore, containing one of twelve notes that make up the bulk of the storytelling here. There are no cutscenes or expository dialogue to introduce the narrative being conveyed, just that first mysterious, melancholy note. We’re given no real details beyond a mention that the note’s author is an inventor, and that there’s a clue for an inventory item hidden somewhere on the island. It’s even unclear who "you" are exactly, or why you’re waking up on what appears to be a deserted island—a location that seems to be important to the author of the notes.

The notes, addressed only to "my love" or some variation, initially sound bittersweet, even romantic, but with each new letter you find, darker shades of the writer’s personality come out. "I know that I didn’t treat you very well," one reads, "and maybe I was also too violent, but please, come back!" Guilt-tripping, promises to change, manipulative apologies: all the telltale tactics of emotional abuse are on display in these missives scattered across the island. 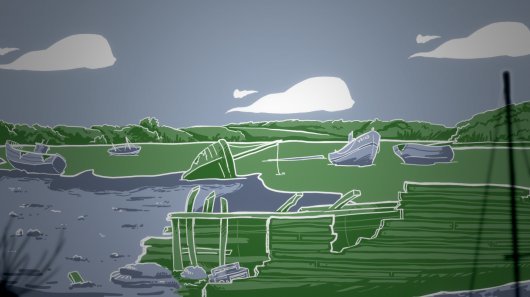 Played in a first-person, slideshow-esque style, I was initially reminded of the Cube Escape series. While the games are quite different in tone and style, the combination of cartoonish art, dark themes, and a heavy reliance on inventory puzzles provides an easy point of comparison. The 2D art style—utilizing a limited color palette comprised mostly of green and grey, outlined in white—suits the gentle, atmospheric soundtrack that accompanies each of the locations you explore, from a shipwreck to a few imposing buildings full of machinery. These scenes are brought to life by simple animation that adds character and helps set the mood: campfire flames flicker, grass sways in the wind, waves push up against the shoreline.

The puzzles in Chapter 1 are not particularly challenging, mostly falling into one of two categories: finding codes and sequences to activate various objects, or basic inventory obstacles. The difficulty level is consistently easy, up until the last few puzzles of the game. One of these, a code-cracking task, made me think to arrive at the solution, but the other one, also a code-cracking puzzle, required me to consult a walkthrough—and I still have no idea how the developers got the answer they did. A hint given in a found note only managed to make that puzzle less clear. Maybe it’s just me, but the two puzzles felt oddly and abruptly difficult compared to the routine of "get the axe to cut the vines, get the key to open the door" that made up the puzzling to that point.

With a runtime of about an hour, I would have liked to see a more consistent progression of challenging (but logical) puzzles to break up the tried-and-true storytelling method of finding notes that reveal more of the story bit by bit—the more streamlined Gone Home-style focus on exploration only really works when the story is engaging enough to make picking up things to read feel like fun. 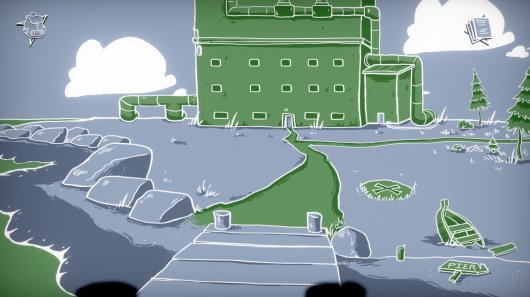 As with any game that hasn’t yet released all of its installments, I can only judge what’s available. While I feel that it could have had more depth in both storytelling and puzzles, this initial episode does manage to feel like a solid introduction to a new series. With only a little more detail as to who you are and why you’ve ended up on this island, I could have seen this being released as a standalone game—albeit one with an ambiguous ending. Without that extra detail, however, the story indeed ends up feeling incomplete. I don’t expect any series to give up all of its secrets in the first episode, but there’s a line between purposefully mysterious and overly vague, and so far this game falls on the wrong side as unanswered questions pile up.

Both the art and soundtrack of Come Back are lovely and complement each other well. Music is limited to a few moments, but the ambient sounds of nature work far better than a constant musical score would have. The developers are based in France, and the English localization is generally fine, save for a couple of oddly-worded sentences and one noticeable grammatical error. The writing is solid, though limited, only vaguely mentioning the note author’s inventions and machines that seem to clearly telegraph that this is merely the first part of a larger story. It creates a good amount of intrigue that becomes frustrating when it’s left unresolved.

Come Back has potential, and a good grasp of tone, but on its own Chapter 1 just isn’t very impressive either as an adventure game or a narrative. I appreciate that Team NoLan is willing to explore the underrepresented (especially in games) subject of domestic violence, and they handle the issue respectfully, so I hope that the following episodes improve upon what works here to tell an important story. If you’re okay with some underwhelming puzzles and the brief playtime, it’s worth checking out for those in the mood for a nicely drawn adventure game with a unique theme. For most players, however, I can’t recommend the series for now—but there’s enough promise to make it worth watching where it goes from here.

Come Back has potential, but a compelling theme and pleasing art style can’t save this first episode from feeling a little unsatisfying, both as a game and a narrative.

GAME INFO Come Back: Chapter 1 is an adventure game by Team NoLan released in 2019 for Linux, Mac and PC. It has a Stylized art style, presented in 2D or 2.5D and is played in a First-Person perspective.

What our readers think of Come Back: Chapter 1