Is there anything more exhilarating and terrifying than the unknown horizon? The world outside your front door is big and full of possibilities, and stepping out into it might just as easily lead you to unglimpsed vistas and new friends as it could to danger and despair. In some ways every story is about traveling beyond that horizon and seeing what you find there, for good or ill; in Carto that horizon is both figurative and literal, as you assume the role of the world’s smallest cartographer on her journey to find her family out in the big world. At times the journey moves a bit too leisurely for its own good, but on the whole this is a sweet, heartwarming game about leaving home and finding it again, and the simple joy of discovery for its own sake.

Carto is named for its protagonist, a young girl who lives in an airship with her mapmaker Granny as the latter travels the skies and charts the world below. There’s something special about Granny’s maps: rearranging their images of land and sea causes the terrain itself to move and change, so that creating a new path is as easy as sliding tiles on a board. One day, while Granny is teaching Carto the basics of map manipulation, a storm suddenly kicks up and sends Carto out into the open air along with the many pages of Granny’s atlas. Carto lands safely in the water and washes up on a nearby island, but the airship is thrown wildly off course, so that it won’t be easy for her and Granny to find each other. Gathering up what map pieces she can, Carto sets out to explore the world on her own for the first time while navigating her way home.

The first thing you’ll notice about Carto is its lush visual style, resembling watercolors from a children’s book come to life. The characters look like expertly crafted paper dolls granted wills of their own, and despite the camera’s bird’s-eye perspective keeping you at a bit of a distance, everyone’s personality shines through in their faces and body language. Carto herself is the most expressive, communicating entire moods through a shudder, a slouch or a wave of her arms.  She hardly says a word, communicating mostly through emoticons, but her enthusiasm for the world around her is infectious, and her personality is evident even when she’s standing still. 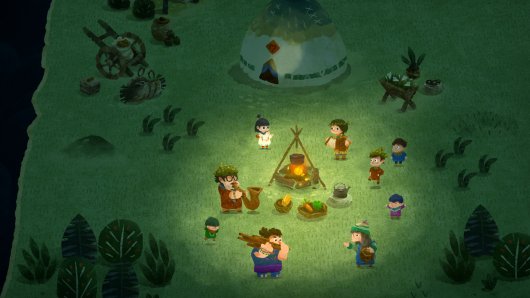 Carto’s travels take her through a number of different biomes, including forests and prairies, a desert, a tundra, the slopes of a volcano, and even the open ocean. She makes friends easily, and in each new area she visits she finds people eager to welcome her and teach her about their corner of the world. The characters and cultures in each location are distinct and memorable, with garb and customs that evoke the particular challenges they’ve had to overcome to thrive in their surroundings. The unvoiced dialogue is often warm and funny, with each culture approaching adversity with blithe good spirits: the volcano-dwellers, for instance, cheerfully accept the danger all around them to the point of near-obliviousness, gushing to Carto about the beauty of their homeland while tossing off warnings to avoid being melted like happy afterthoughts.

Each step along Carto’s journey takes her to a place she’d never dreamed of and immerses her in things she didn’t know about the world. The atmosphere throughout is best described as joyful, celebrating life, community and new discoveries. This is helped along by a bouncy, steel-drum-influenced soundtrack that matches Carto’s own effervescent personality.

Puzzles are mostly a matter of reordering the terrain with Granny’s map so that you can reach objectives as you try to help the various people you meet: finding a certain kind of soil as a memento for a new friend preparing to sail away from home, for instance, or rescuing the lost captain of a band of desert dwellers from among the shifting sands. Throughout your travels you’ll gather more of the missing map pieces; oftentimes if you can’t figure out where to go next, it’s a matter of looking for a piece you haven’t found yet. 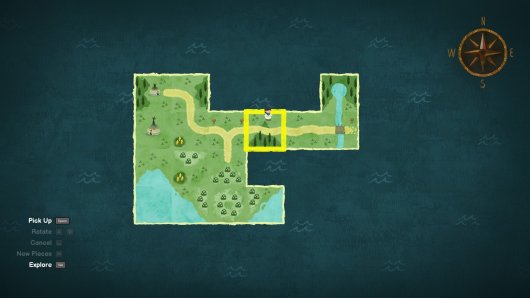 The map screen allows you to see your current location with all the map pieces you’ve gathered represented as squares on a grid; it’s laid out a bit like a jigsaw puzzle, where you can slide, lift, and rotate the pieces as needed to change the landscape in real time. (A helpful legend explains which buttons to use to select, move, and rotate squares.) Often a puzzle will involve altering your surroundings to match a description you’ve been given of where you’re trying to go. If you’re supposed to meet somebody in a tree-lined meadow, for example, you might arrange four forest pieces on all sides of a grassy square, at which point your destination will materialize where it was described. (You can also use the map as a form of fast travel by picking up the square you’re standing on and moving it where you’d like.)

Many of these puzzles are inventive and unexpected, making full use of your ability to alter geography. At various points you’ll change the way the wind blows, redirect rivers, and even alter the layouts of buildings. Much of the challenge comes from figuring out how to piece the landscapes together: you can only set two pieces next to each other if the adjacent edges match, so that you can’t place a patch of desert in the middle of a forest unless your sandy square has trees along its sides. Sometimes configuring tiles a certain way will cause new squares to appear containing a landmark you were seeking. There’s no accidentally undoing this kind of progress; once you find an objective, you can’t erase it by moving things around again. (But wait, I hear you saying—if each square is a map piece you’ve found, how do new ones suddenly appear when you rearrange them? That’s easy enough to answer. It’s magic.)

Controls are simple, with the arrow keys controlling movement and a single key used to interact with the environment; there are also dedicated buttons for your inventory and the map screen. A magnifying glass appears over Carto’s head when you approach a hotspot, and a speech bubble shows up near characters you can talk to. Interacting with hotspots often results in a punny observation from the omniscient narrator, but occasionally you’ll have to collect items and take them somewhere in order to progress; for this you use your inventory, though it rarely features in what you’d call true “puzzles.” More often than not Carto will bring out what she needs automatically when the situation calls for it, with the inventory functioning more as a mechanism to carry things from point A to point B. It’s also where Carto stores the paper airplane notes from her Granny that arrive when entering a new area, which you can take out and read at your leisure. 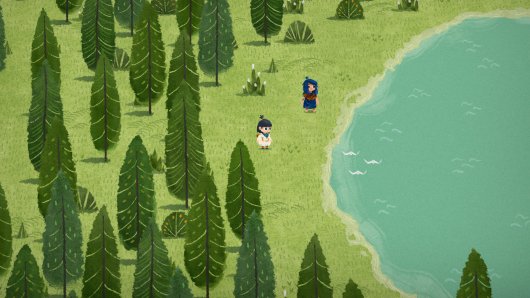 And leisure is something Carto appears to have in abundance: while you definitely get the impression that she misses her Granny and would like, eventually, for them to be reunited, the game doesn’t lend her efforts any kind of urgency. This is an incredibly laid-back game, and its protagonist seems perfectly content to take her time exploring and getting to know the locals, to the point that she frequently places their immediate needs above her own. I rarely felt as if helping the people I met was a necessary stepping stone on the way to finding Granny and the airship; rather it seemed like Carto was taking up their various causes because she had time to spare, an inquisitive mind, and a generous soul.

And that’s fine, of course—it’s nice to play a game about helping people for its own sake!—but the framing story of Carto searching for a way home often fades so far into the background that the game almost seems to forget about it. Occasionally it will come back into focus, with other characters referencing Carto’s need to get back to her Granny, but these feel like they’re meant to remind the player that the through-line exists. Granny’s notes don’t help to dispel this sense of detachment, either: they have a tone of “Have fun out there; see you when I see you!” that belies the notion of the two searching desperately for one another.  Carto would have been better served by making its heroine’s journey intentional rather than accidental; her people are cartographers, after all, so why not have this be Carto’s first solo journey as she learns the family trade, with a promise from Granny to return and pick her up later? 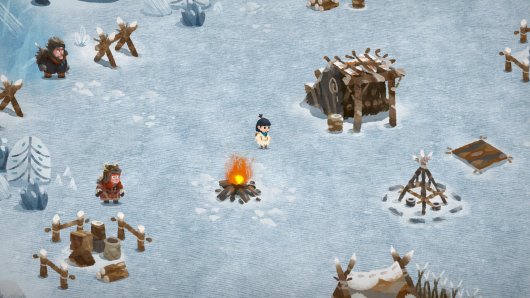 This might be easier to ignore if the game’s various regions were exciting enough to distract from it, but for a game about exploring the world and seeing new sights there’s a great deal of sameness to Carto’s environments. Moving through the game world means frequently traversing open spaces without much to look at; there’s plant life dotted around, and birds flitting through the sky, but it rarely gets more lively than that. Only in the more populated regions does the fullness of the game’s creative energy really stir to life. Aesthetically the various locales rarely feel distinct from one another. Most of the areas you’ll explore are heavy on greenery, with forests that give way to rolling fields, so that the islands look much like the grasslands which look much like the deep woods. The desert and the volcano place a similar emphasis on earth tones and bare rock, and while the polar climes at least trade greens and browns for blues and whites, you’ll still spend much of your time among stands of trees.

Still, such shortcomings are outshone by Carto’s zest for adventure and its infectious good nature. It’s almost impossible not to smile watching the little mapmaker gathering up wandering sheep, playing tug-of-war with a camel, or navigating earthen tunnels with the help of a worm. It’s a relaxing game, more charming than challenging, but the seven hours you’ll spend in Carto’s company are memorable, enjoyable, and ideal for sharing with any burgeoning young explorers you may have in your own life.

It’s a bit too relaxed at times, but Carto is full of heart and almost impossibly cute, sending players on a warm, fuzzy journey into the not-so-wild blue yonder to discover what it means to be far from home.

GAME INFO Carto is an adventure game by Sunhead Games released in 2020 for Mac, PC, PlayStation 4, Switch and Xbox One. It has a Stylized art style, presented in Realtime 3D and is played in a Third-Person perspective. You can download Carto from: We get a small commission from any game you buy through these links.
The Good:
The Bad:
The Good:
The Bad:

What our readers think of Carto