Because Because Games Full Game Details

Adventure games by Because Because Games

Point-and-click detective mysteries often run the risk of being dry and sometimes lifeless experiences that you need to be in the mood for. Indie UK developer Matt Barker’s Detective Boiled-Hard bucks this trend, providing a hilarious and wild ride from start to finish. It’s the kind of game you talk about making with your mates after one too many down the local pub, only to find out the next day that they’ve all wised up, leaving you to voice every single character alone while having a crack at the graphics in MS Paint—and for the most part it’s glorious, although it does come with some notable caveats.

You play…well, Detective Boiled-Hard, a gumshoe in New Cork City. Your main goal is to investigate the seemingly accidental animatronic-related movie set death of action hero Arnie Swordswinger. In case it isn’t immediately apparent, this game is all about puns, satire, and parody. If you can think of a blockbuster movie or actor from the ’80s and ’90s, then there will likely be a joke about it here, from Jurassic Park to Rambo to a lengthy spoof of Die Hard, among many others. It has a very basic premise, but Detective Boiled-Hard isn’t really about plot, it’s about fun and laughs.

This brings me to my first caveat: if you don’t like its particular brand of humour, this is not a game for you. The comedy is a mix of Monty Python, Mr. Bean, and sheer silliness. If you think the concept of Steven Seagull starring in a movie with Vin Petrol called XXXcrement, wherein he kills a man by defecating on him, sounds funny, then the script will be right up your alley. There are also some jokes that are very British-centric, such as, “Make sure my Lynx gift set is in Nottingham scent.” Not all gags are like this, but there are some instances that might leave non-Brits scratching their heads. 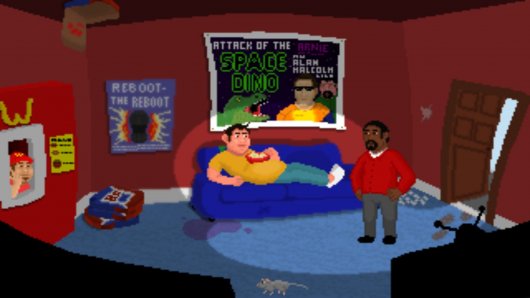 The graphics are done in a modest, brightly coloured pixel art style that conveys the world well enough to get the job done. You will visit a handful of locations across New Cork City, including the movie set, a harbour, and the slovenly house of Arnie’s super-fan. Animation is functional but fairly primitive, with a very mid-2000s, Newgrounds Flash game feel. Fortunately there are enough amusing touches and sight gags to liven things up, such as a trash-talking disembodied head that may just remind you of a certain pirate skull with similar sensibilities, a perpetually enraged police captain who spits when he shouts, and a line-up of visitors to the station that includes Santa Claus and Robin Hood. Character models include a few familiar faces and some noticeable diversity, in particular its African American protagonist. The cast is quite large for a small game, which makes it all the more surprising that every single character is voiced by Matt Barker himself—even the females. The acting quality is hardly professional level, but it’s more than adequate and really rather impressive given the number of roles performed.

The controls are simple: left-click to use, right-click to examine. Hovering your mouse pointer over the top of the screen lets you see your inventory, where you cannot combine items, only select them for use. Despite its simple look and design, Detective Boiled-Hard has some quality-of-life features that more adventure games should offer. For instance, it uses its meta satire to introduce game mechanics without a tutorial as you play, like when you are given a postcard and Boiled-Hard comments that he can look at it to travel to other locations. Another helpful feature is when you encounter something that triggers new conversation options, a big exclamation mark flashes on the screen. This is a welcome indicator that stops the unnecessary back-and-forthing that can plague the point-and-click genre. You know that you’ve unlocked new dialogue, though you still have to work out who best to ask about it.

Detective Boiled-Hard is short (around an hour long) and its gameplay is very straightforward, as there aren’t really many puzzles. There is some light but predictable item use, but you’ll mostly be having conversations with other characters to unlock new subjects to discuss and areas to explore. This is done through a topic-based dialogue system that even lets you flirt, insult, or pose personal questions just for fun, though you can choose to skip these and get right to the point if you wish. Once you’ve accessed a new location, you travel back and forth between scenes via the overworld postcard map, all with the goal of solving the mystery of Arnie Swordswinger’s death. For a detective game, however, the most “detecting” you need to do is showing items you have found to different people, and even this only happens on a couple of occasions. 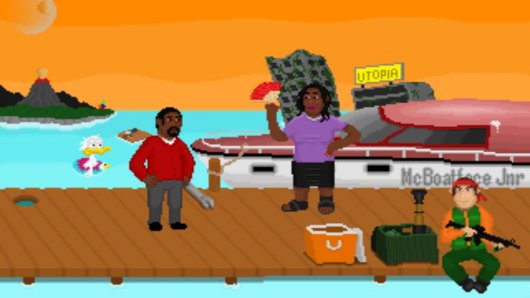 In this respect, as a mystery Detective Boiled-Hard plays itself. You see how Arnie dies in a cutscene at the beginning, but you don’t know who, if anyone, actually killed him. And in the course of the subsequent investigation, you don’t actually solve anything, just talk to characters who then point you to other characters and more conversation. Sometimes you will pick up an important item that is prominently placed in the environment, but then it’s back to talking.

This brings us to the second major caveat: neither the gameplay nor the story presented will rivet you. There are no twists or turns, really, so if you’re looking for something strong in the narrative department, you won’t find it here. The world is fun and full of amusing characters, but interrogating people is as far as the whole experience really goes. Detective Boiled-Hard is all about humour, doubling down on the laughs because so many other aspects of this game are so basic.

If you like your detective mysteries deep, gritty and hard-boiled, you should steer well clear of this game, as it lives and dies almost exclusively on its ability to make you laugh. If it sounds like your type of humour, however (and the free standalone mini-case should give you a good idea of what to expect), rest assured that Detective Boiled-Hard is a hilarious if simple romp through pop culture—the sort of game to play when you’re more in the mood for light-hearted shenanigans that don’t require concentration, rather than anything serious.

A short and intentionally silly, light-hearted experience, Detective Boiled-Hard emphasizes humour over gameplay, story, and presentation, and one’s enjoyment of it will come down entirely to whether you share its distinct sense of humour.

What our readers think of Detective Boiled-Hard