It’s always tantalizing yet disappointing when a game has obviously promising elements but falls just short of being great. That’s exactly how I felt after playing Grave Danger’s Night Lights. This side-scrolling puzzle-platformer has a simplistic yet charming art style and presents some intriguing game mechanics involving light and shadow, but it’s very short and ends too abruptly to truly flesh out its gameplay, leaving behind a strong sense of missed potential.

The threadbare narrative is conveyed through a brief yet nicely animated intro cinematic. When a meteor crashes down to earth, causing a widespread blackout, a little square robot wakes up suddenly and must now restore power to the nearby city by advancing through a linear series of levels, overcoming a variety of electricity-based obstacles along the way.

The game is visually pretty, with most of the forested and industrial environments coloured in various shades of blue, complemented nicely by the few scattered orange and yellow lights that still work. Most of the somewhat minimalist background artwork is angular, with very few rounded shapes apart from the ever-present large moon illuminated in the night sky behind you. The music does not serve the presentation quite as well, however, as the peppy, sci-fi-sounding synth track is nothing more than the same few notes played over and over, and there’s little else in the way of sound as a distraction beyond the padding of your feet, a few beeps and boops and mechanical hum, along with the odd owl hooting in the woods. 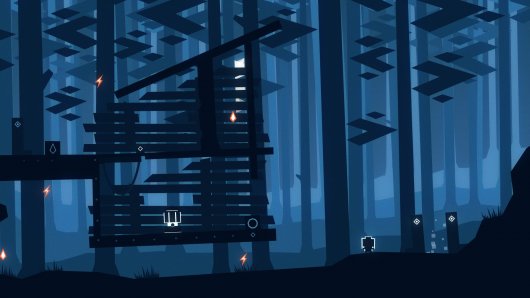 The primary focus of Night Lights is its gameplay. The controls are extremely simple: you can jump, climb, and interact with objects, ranging from flicking a lever to rotating wheels to pulling and pushing lanterns and boxes around. If you’re using a gamepad, the control scheme will feel familiar. Alongside the usual jump and contextual ‘use’ buttons, the robot’s few other abilities are mapped to the other face buttons or trigger buttons for easy access. These can all be changed but the default scheme is fine for chaining together moves to make advanced movement and light platforming fun and easy. The same can’t be said of the keyboard controls, which involve a rather unintuitive combination of the arrow keys, Shift and X button. These can be rebinded, fortunately, and you’ll probably want to.

The main mechanics revolve around using lights to change the environment. Sometimes light works as you’d expect, causing dark things to appear, such as paths and holes in walls, but other times it has the opposite effect, making things disappear instead. And not just visibly, but literally. Ladders, platforms, even the ground itself that were previously available to you may not be once a light is shone upon them. But this can also be used to your advantage, creating new paths where once you were blocked.

The first few tasks are simple but they don’t stay that way for long, as you’ll soon need to begin supplying power to both the lights and to the teleporters that whisk you off to the next level.  Eventually the robot gains four permanent power-ups throughout the game, though unfortunately these are not accompanied by more complex levels to really make full use of the new mechanics. 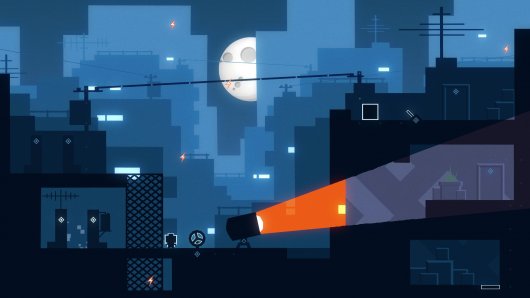 Upgrades include a dash that greatly helps horizontal jumping, a double jump to gain additional height, a head bulb that you can use as a small source of light or drop on the ground and recall it anytime with a push of a button, and an air dash you can use a number of times for even greater jumping challenges. All these abilities require energy, which is represented by a battery meter at the top left of the screen. It can run out quickly, but it auto-replenishes at the same speed, and you can collect lightning bolts scattered across the levels to permanently increase your meter.

Unfortunately, there are some noticeable bugs that leave the experience feeling slightly undercooked. A weird one is when I boot up the game, both the music and sound effect sliders are inexplicably muted, forcing me to re-adjust them every time I play. Another occurs at random points when trying to dash and then jump for greater distance, which stops the protagonist dead in mid-air, as if he’s lost all momentum. A simple restart of the level fixes it, but it happened too often to ignore. I encountered a visual glitch as well, where the energy battery meter didn’t materialize on-screen. And while not a bug, the game is somewhat wonky with its physics and how objects get pushed around, so if you accidentally lock yourself into an unwinnable state, you’ll have to start the level over.

In the end, while Night Lights has a unique art style and some fun and fresh puzzle-platforming ideas, it ends up feeling more like a demo than a complete game. The whole thing can be completed in under two hours, and there is even an achievement for doing so. Between the noticeable bugs, short length, and an abrupt ending, there’s a lot left to be desired when the final credits roll, just when it seems the game should be picking up in both story and gameplay complexity. If you’re into the puzzle-platforming genre, you’ll find some brief enjoyment here, but it’s all over so soon that it might leave you craving for more.

Night Lights is a cute side-scroller with a quick pace and unique gameplay that unfortunately is a bit too buggy and ends way too soon to stand among the better puzzle-platforming adventures.

GAME INFO Night Lights is an adventure game by Meridian4 and Grave Danger Games released in 2019 for PC. It has a Stylized art style, presented in 2D or 2.5D and is played in a Third-Person perspective. You can download Night Lights from: We get a small commission from any game you buy through these links.
The Good:
The Bad:
The Good:
The Bad:

What our readers think of Night Lights