In playing through a short thirty minute interactive preview, I found the basics are what we’ve come to know, love and expect from point-and-click fare. The typical options to talk, interact, and inspect are all here, with one additional wrinkle: licking (the characters are all cats, after all). In the demo this new ability wasn’t used for anything except the occasional funny line, but its inclusion raises all kinds of possibilities so hopefully it will have some novel uses in the full game. 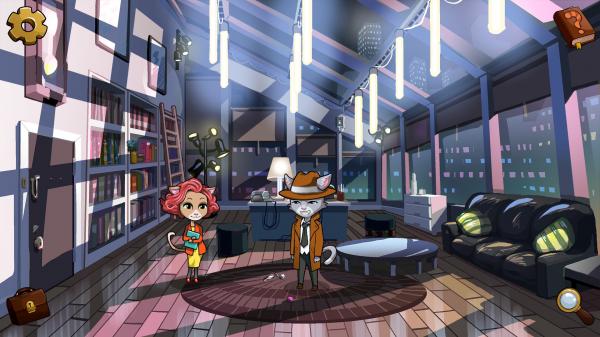 Graphically this indie South African production is a treat with its beautiful hand-drawn cartoon backdrops and cute feline characters. Locations like Nutterbutter’s large-windowed high rise office or the Knitty Kitty Club with its vibrant pink, red, and blue neon lighting are a joy to look at. Even the map of the city used for fast travel is visually pleasing, with the bright lights of downtown reflected in the bay and the smog of the industrial area choking the distant sky. Characters gently bob up and down while idling, and the occasional background animation like kittens on display at the club help add life to these locales. The felines struck me as something out of a Funko catalog, with their large, expressive heads and smaller but equally detailed bodies.

The feline influences of the game extend even to the interface, showing that Silvernode Studios is paying attention to the little details as well. The default mouse pointer is a literal mouse. For interactions it changes to a cat’s paw. For licking, a tongue. And, of course, what cat would be without his briefcase inventory. In another nod to some of the great classic adventures, Nutterbutter even jokes at one point about how you can’t see his briefcase while walking around (it pops up at the bottom of the screen with any collected items when the inventory is displayed).

The production is clearly enamoured with its voice-overs, and rightly so. Although I encountered only a handful of characters, they’re all well-delivered, particularly the eager secretary Tabby who, between the actor’s performance and the earnestness of what she has to say, provides some truly laugh-out-loud moments – typically at the expense of Nutterbutter. Hopefully the byplay between the two will continue to receive a good amount of attention throughout. At the moment Nutterbutter’s voice, at times, is too quiet in comparison to the others and the stylish jazzy music, but there’s plenty of time left for volume issues to be resolved. It’s important to get right, as he talks a lot, as do the other characters, at least in the early going. 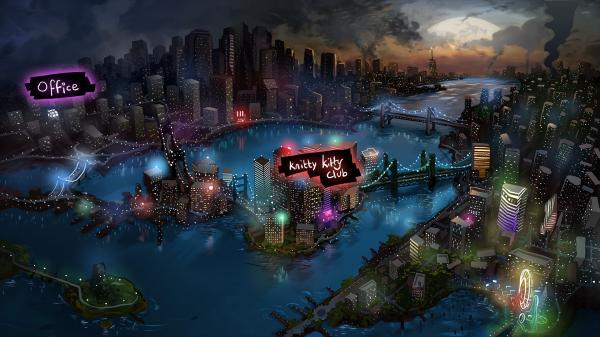 Between the protagonist’s monologues (he records his case notes for posterity into his handy voice recorder, named Ramon) and conversations with Tabby, Officer Krakowski (a by-the-book bureaucratic beat cop), and the chief of police (who’s only heard over the phone), there was little else on offer in the preview. As such, it was a bit hard to get a sense of the gameplay or challenge of the puzzles as there really was only one. Traveling from Nutterbutter’s office to a crime scene, I was denied entry by Krakowski, forcing me to head back to the office to get my badge and authorization papers, and then return again to the crime scene. Not the most scintillating of fetch quests, but should make for an easy introduction to the basic game mechanics.

As the playable portion ended just before the investigation could begin, it’s also hard to gauge the storytelling. However, the Montameeuw and Catulet mobs are name-dropped, suggesting a heavily pun-filled tale that isn’t afraid to parody even literary classics like Shakespeare’s Romeo and Juliet. Though the demo of Nine Noir Lives offered the merest glimpse into its feline-occupied world, what I did see (and hear – and licked?) I quite enjoyed. If the gameplay and story match the quality of the presentation, this could well be one of those purr-fect point-and-clickers to join the ranks of the greats when it’s released sometime next year. To follow its progress in the meantime, you can find additional details on the game’s official website. 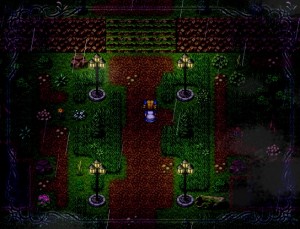