Review for Frog Detective 2: The Case of the Invisible Wizard

Note: Though the article content is the same, the review of The Haunted Island: A Frog Detective Game has been published separately with its own individual rating.


Whether faced with a possible ghost infestation or ruined parade decorations, there’s something about the charmingly carefree way that everybody in the Frog Detective universe brushes off issues and just gets on with their lives that makes it a very appealing place to want to dip into right now. And whilst we seem to be currently overrun with anthropomorphic detectives in the adventure game world these days, from comic book cats to trench-coat-wearing raccoons, no one does the animal sub-genre quite like indie developer Grace Bruxner.

Any notion of the brooding noirish atmosphere found in similar detective-based games is reserved solely for the jazzy soundtracks here. Instead, both The Haunted Island and The Case of the Invisible Wizard serve up a sunny, whimsical slice of comfort and light absurdity. Both episodes’ colourful cast of characters, with their hilariously drawn blank-eyed, grinning faces and bizarre personality traits, are a delight to interact with. Each story will only take about an hour to complete from start to finish, and those hunting for complex puzzles will certainly not find them in either of Frog Detective’s adventures. But sometimes in this world of strained relations and ever-increasing tensions, a cheerful amphibian and a gaggle of wonderfully weird animals to chat with is all you need. 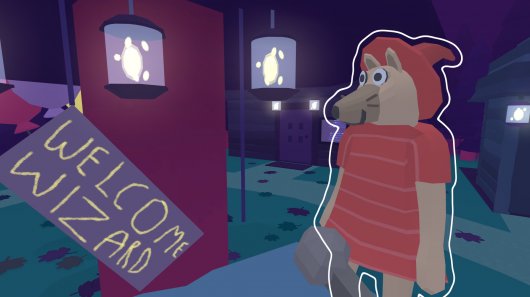 In both games you play as the eponymous investigator, frequently referred – to his face – as the “second-best detective” in the world (the first, of course, is Lobster Cop). Players control our froggy friend using the directional or WASD keys to move freely in the 3D world, left-clicking with the mouse to interact with things or people and right-clicking to zoom into objects with your magnifying glass (a feature that seems to have no benefit other than to make objects or characters morph comically out of perspective).

For most of both installments, you’ll view the world directly through our sleuthing croaker’s eyes, apart from when he chats to the locals and the camera cuts back to his usually puzzled expression as they mention something ridiculous (this happens a lot). Each game sees you assigned by your chipper supervisor to a particular case: in the first you’re to find out what’s going on with – you guessed it – a supposedly haunted island, whilst The Invisible Wizard sees you heading to Warlock Woods to find out who’s spoiled all the decorations for the new guest’s welcoming festivities.

The two plot lines are mainly excuses to get you off interrogating a host of weird and wonderful characters. From Haunted Island’s pose-striking alligator Fresh X to Invisible Wizard’s singing rhino Mary, whose terrible voice has caused the whole village to soundproof their rooms, Grace Bruxner has shown a knack for writing amusingly silly oddballs that you’ll want to just stay and gab with as long as possible. It’s almost a shame that the dialogue for each character is reasonably brief; at least with the sequel there’s a little more to ask each animal and more creatures to speak to. 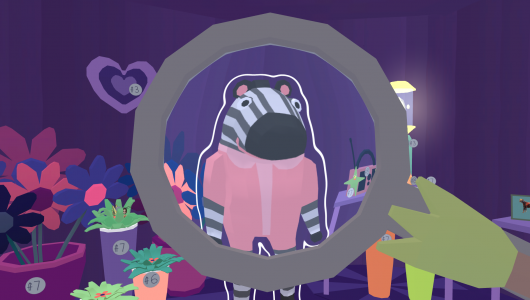 There’s no voice acting, but the dialogue appearing in a rounded, childlike font is refreshingly down to earth and often laughably informal. Characters frequently insult our gumshoe and then apologise for their impoliteness, the detective replying with a jovial “no worries!” or something similar before getting onto his next round of questioning. Everyone is so appreciative of everyone else and conversations so unaffected by tension of any kind, it put this conflict-avoidant writer deeply at ease – which feels odd considering you’re spending your time with an eye-patch-wearing lion called Ralph, but hey, I’m down for it.

Haunted Island finds you on the hunt for items that can make an explosive device (pasta, a chunk of gold and some wool, naturally) to knock down a wall which may be concealing a spooky ghost. Whilst you do have an inventory at the top of the screen that displays what items you’ve got, you can’t select them for use with lots of different objects as with more traditional point-and-click adventures. Instead the on-screen inventory mainly serves as a reminder of your possessions, and you’ll only be able to use the items through dialogue options (e.g. give big shell) rather than where you see fit.

In the second game, though the mechanic of finding and fetching necessary objects is similar, each character has a particular want – from a party hat to a collection of handmade pies – that needs fulfilling for you to progress the story, in many cases supplying you with another item in return which will fulfill someone else’s need. It’s all pretty basic stuff and even the most casual adventure game player won’t find anything here to trouble them. 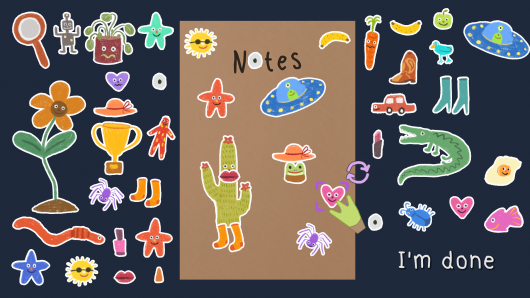 Invisible Wizard helps you keep track of your inventory as well as each character’s desire and their possible motives for mucking up a parade in a handy notebook. In keeping with the game’s fanciful style, you get to decorate your book at the beginning with a variety of fun stickers, from a smiling fried egg to a grinning cactus, just for your own frivolous amusement. After meeting each character in Warlock Woods, a page will automatically get filled in with learnt details about that animal, ranging from the professional to the slightly less so – “a private boy” or “long snoot.”

Unfortunately in my first playthrough, I never got a prompt to tell me that the notebook could be brought up at any time by pressing Tab, seemingly due to a bug. I’m glad I played again and discovered my loss, as there’s plenty of mad little scribblings to leaf through and chuckle at which can be easy to miss at first glance, plus a funky “suspicious” sticker you can whack on and off of characters’ pages, for no real reason other than you’re in an accusatory mood.

Both the haunted island and Warlock Woods are simply designed with a rather minimalist art style but they are bathed in bright, pastel colours, easy on the eye and inviting to explore. The settings are small and won’t take long to get around, but there’s plenty of pictorial in-jokes and oddities to discover, such as peeping into the characters’ homes in Invisible Wizard to discover pictures of Grace’s dog on the walls. And I can’t emphasise enough how funny each animal looks before even uttering a word to our leaping investigator, their wide-eyed, blank faces setting up the deadpan humour perfectly. 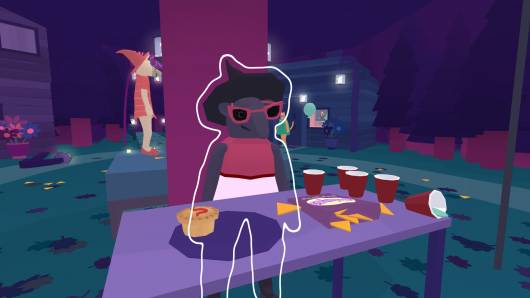 Dan Golding, who previously created a brilliant ambient soundtrack for Untitled Goose Game, does a great job here of composing several dramatic scores for both episodes that work well with the tongue-in-cheek comedy and mildly absurd jokes. The wailing saxophone and soft drum brushes of the series’ main theme could be mistaken for a more serious film noir accompaniment (I got definite Grim Fandango vibes) but works even better in the context of playing a little frog as he hops around interviewing a cat called Susan. Invisible Wizard’s intro, which sees our impassive web-footed protagonist make his way to the forest on an incredibly slow cart whilst the music builds up more and more melodramatically, is probably one of the funniest scenes in the whole game.

The two adventures are so short that you’ll be able to complete both in one sitting, but a choice you need to make near the end of Invisible Wizard means there’s a little bit of replayability if you want to discover both endings. Really, though, with worlds as well-realized as they are in the Frog Detective series, you may just find it fun to revisit both titles to bathe in the silly warmth of its cast, locations and admirably zany dialogue a little while longer. Thank goodness a short scene at the end of Invisible Wizard suggests another episode is already planned to make another splash in our lives sometime in the near future.

WHERE CAN I DOWNLOAD Frog Detective 2: The Case of the Invisible Wizard

Frog Detective 2: The Case of the Invisible Wizard is available at:

Frog Detective 2: The Case of the Invisible Wizard expands on its predecessor’s strengths with an even wider cast of loveable, eccentric characters to question, all the while keeping the original’s sunny charm and humour.

GAME INFO Frog Detective 2: The Case of the Invisible Wizard is an adventure game by Grace Bruxner released in 2019 for Mac and PC. It has a Stylized art style, presented in Realtime 3D and is played in a First-Person perspective.

What our readers think of Frog Detective 2: The Case of the Invisible Wizard