Contrary to what it may sound like, Jupiter & Mars is not the latest science fiction yarn set in outer space. Instead, it is a VR-compatible title that sets its sights on the other final frontier: Earth’s vast and mysterious oceans. It’s essentially a vehicle designed to enjoy the tranquil exploration of some truly breathtaking environments, with the occasional bits of stealth gameplay and searching for collectibles thrown in for good measure. As such, the game exchanges a more traditional narrative for an emotional connection built up between you and the aquatic animals that live in the deep blue sea over the course of a visually arresting experience that’s as much PSA as PSVR.

In the future, the time of the Earthwalkers – humans – has come to an end. The sea has reclaimed once-dry land, and with it the remnants of mankind’s civilization. But something else has found itself deposited into this underwater realm, something alien that works against the creatures of the deep like a malignant tumor: machines and structures left behind that now endanger life below the surface. Thus, two dolphins – Jupiter and Mars – embark on a journey to neutralize these threats.

Or at least, that’s how we are probably meant to infer the backstory. There is a slight narrative setup, to be sure, but some of the dots have to be connected by paying attention to ancillary information like trophy titles or drawing certain conclusions. What explicitly takes place as the game begins is far less enigmatic: just two dolphins going for a swim. 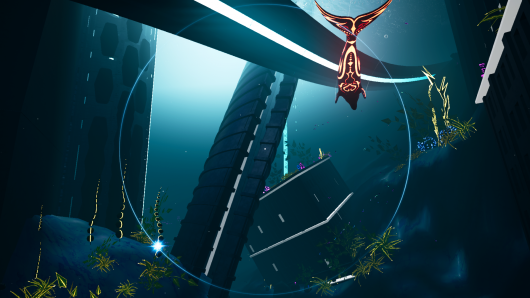 Slipping into the role of Jupiter in first-person perspective, you frolic around in the water by adjusting your camera view and using shoulder buttons on the controller to swim forward or, at a slower pace, backward. Sending out a burst of sonar at the press of a button outlines objects and obstacles within your vicinity and highlights certain items like rocks and clamshells that you can order your companion Mars to dart toward and bash open, occasionally revealing collectibles or even opening pathways to proceed.

The focus of the experience isn’t entirely on open-ended exploration. Most of the game’s five stages ultimately lead to a man-made submerged control center powering the area’s machinery, which must be shut down by shooting a sonar pulse at it before the enormous Elder whale will take Jupiter and Mars to the next location. Thorough examination also reveals a number of deep-sea creatures in each level that need be rescued, as well as environmental hazards that must be carefully avoided. There is even a boss battle utilizing Mars’s penchant for ramming things at one point, though this plays out more like a puzzle using both dolphins’ abilities than a bona fide action sequence.

Along the way Jupiter gains new abilities, earned while exploring or as a reward for completing specific sections. These abilities generally grant access to new areas, such as the strength to swim against the current or enough insulation to withstand extremely cold water. Taking a ride on the Elder whale back to a previously cleared place thus equipped now means being able to find more hidden secrets for those going for a completionist run. 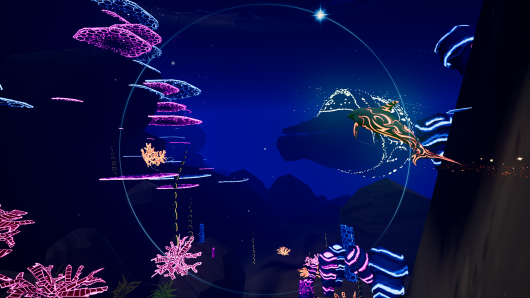 About the only gameplay mechanic that requires any skill, even if just a slight amount, is stealthily avoiding the machinery that is crippling the wildlife. There are the stationary machines – large contraptions chained to the ocean floor like water mines – that send out pulses that will repel you back to just outside their periphery if touched by one. Other, smaller machines are mobile probes that patrol set routes and only begin sending out their shock signal if you get caught too close to them. Keeping your distance and using specially-colored soundproof rock formations to hide behind are the keys to progressing past these obstacles.

Whereas early scenes consist of pretty but standard ocean floor vistas, there is some interesting variety later on, and even some rather awe-inspiring sights to admire along the journey. A major metropolitan cable bridge, an inner city block of high-rises, and even the Statue of Liberty aren’t exactly sights one expects to see under the sea, and swimming through these ruined remnants of humanity really sells the game’s future vibe, even if life beneath the waves otherwise carries on the same as it ever did.

The game isn’t a graphical powerhouse by any means, but it mixes various styles and puts color to good use, combining realistic visuals with surreal hues and markings adorning plant and animal life. Even the absence of color is used to good effect in a game where your surroundings can at times turn pitch black. Sending out sonar waves paints the immediate vicinity in bright neons and pastels, and even the outlined silhouettes of the environment are striking. The dolphins themselves, as well as many of the other sea creatures, are stylized with flourishes and designs of similarly vibrant psychedelic colors, which is visually arresting. That said, it is possible to find oneself in a dark cave, unable to intuit the way out due to having no real sight and your sonar not offering much to go on, even an indication of which way is up. 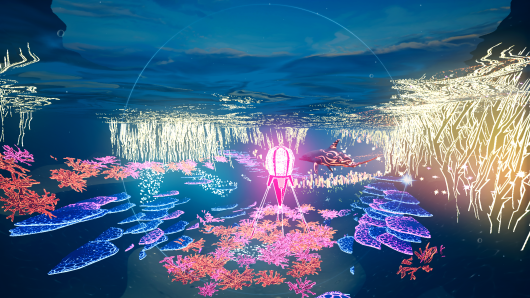 Getting to experience all this in first-person VR may be a big draw for some, though some caution is suggested for those who haven’t yet gotten their VR legs yet. I’ve become accustomed to quite a bit of VR motion just fine, but I felt myself getting nauseous within minutes of diving into Jupiter & Mars. I suppose the near-weightless, free-floating nature of the underwater physics are a taller hurdle than VR navigation on dry land. It’s a shame that enjoying these deepwater environs comes with a steep bar of entry for your equilibrium. Thankfully, along with multiple comfort settings to try, the developers have also implemented a non-VR mode that will allow everyone to swim with the dolphins.

For such a relaxing adventure overall, it’s a bit surprising that upbeat electronica makes up much of the game’s music rather than something more somber and tranquil. It’s not that the soundtrack actively detracts from the experience, but it may not be to everyone’s liking. I did encounter one standout moment, however, when everything gelled together: entering an underwater cave system for the first time, the camera zoomed out to show both dolphins playing between stone columns, their neon designs swirling through the relative darkness gracefully, and all of it set to a magnificent rendition of Ravel’s Boléro. In a game whose accompaniment is otherwise merely passable, this was a brilliant moment that I’d love to experience again. And, of course, the dolphins and other animals’ lifelike sounds are adorable; there’s even a voiced narrator for the handful of moments when the odd bit of story needs to be told with words.

Jupiter & Mars is probably best enjoyed by those with an interest in all-things-oceanic. In fact, the game’s development is linked with two benevolent causes, SeaLegacy and The Ocean Foundation, who each have informational videos integrated into the main menu, as well as an Easter egg or two in the actual virtual world. Those looking for a challenge or more than a threadbare narrative will find this title lacking, as despite having a few light gameplay elements woven in, the experience is largely an explorational one, meant for four or five hours of underwater Zen. It’s not a technical marvel, but it’s a pretty neat aquatic experience that I’m glad I got to try out, even if its VR implementation left me a little green around the gills.

Jupiter & Mars is the kind of game you need to go into completely aware of what to expect. Its gameplay and narrative are likely a bit too shallow for newcomers to take the plunge, but those in the mood for a chill ocean exploration experience will definitely find some enjoyment here.

GAME INFO Jupiter & Mars is an adventure game by Tantalus and Wicked Witch released in 2019 for PlayStation 4 and PlayStation VR. It has a Stylized art style, presented in Realtime 3D and is played in a First-Person perspective.