In space, no one can hear you struggle to work out which button to press. And that’s precisely what you’ll spend a lot of your time doing in GhostShark’s psychological point-and-click sci-fi adventure Still There. Half “Firewatch in space” with its engaging story of isolation, grief and loss aboard a ship, and half “Papers Please also in space” due to its complex technical puzzles, this game isn’t for those lacking in concentration. Its commitment to not dumbing down its challenges (unless you actively choose to) is admirable, and when everything clicks into place and you complete a mammoth task, it can feel magical. The problem lies in getting to that point, which, due to the huge array of onboard controls and obscure spaceship manual you must consult to have any hope of understanding your goals, means solving puzzles often breaks down into furiously clicking switches and buttons in the hope of something working. The intriguing story and small but lively cast of characters help make the occasional frustration worth persevering through, but with a few tweaks to the puzzle introductions and ideally a hint system, this could have felt less like a drawn-out space odyssey and more like an out-of-this-world adventure.

The tale kicks off several decades in the future as you take control of Karl Hamba, the sole human inhabitant of space-lighthouse The Bento, stuck performing the same maintenance tasks day in and day out alongside your chipper AI companion / overseer Gorky, there to assist and keep an eye on you for your employers Brane Co. Karl’s adrift not only atmospherically but also mentally, unable to forgive himself for the initially unknown fate of his young daughter Eshe and the wife he left behind, Hani. So, much like Firewatch’s Henry, he plunges himself into deep isolation, only functioning to wake, eat, perform his tasks, sleep and drink excellent Italian coffee. And just like in Campo Santo’s wilderness adventure, it doesn’t take long for that self-imposed prison to be suddenly disturbed by an outside force that changes everything – in this case a distress call from a stranded ship and its mysterious captain Elle.

The compact Bento is split into five rooms: bedroom, bathroom, kitchen, exit hatch and control room. You navigate in first-person between rooms by holding down the right mouse button and dragging left or right to pan the camera along a side-scrolling plane – or there’s an option to fast travel to a room by clicking its icon in your slide-out inventory at the bottom of the screen. The lightly pastel-coloured hand-drawn depictions of Karl’s surroundings are bright and eye-catching, and your exploration of each area is accompanied by the occasional looping ethereal piano chords or context-sensitive sound effects (the flush of a toilet or the click of a keyboard). From the oven to a toilet paper roll, most objects can be interacted with, a single left-click bringing up icons to examine closer, pick up, or combine with an item in your inventory. Each room is packed with things to scrutinize, sometimes overwhelmingly so, especially when you’re searching for a tiny fuse or battery amongst the mess. 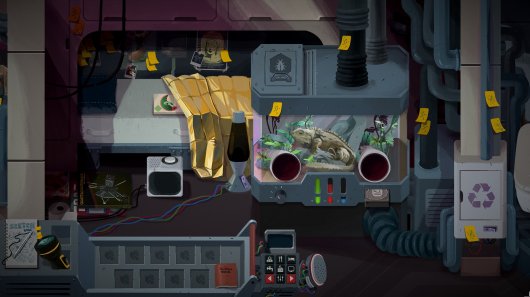 You will need to use that oven, as alongside the more technical tasks Gorky and Brane Co. want you to complete, you also have to nourish yourself throughout the several days that split the game into chapters. This means cooking up bland space paste and even the unpleasant process of recycling your own urine into water…for you to drink. The developers want you to experience the full reality of what surviving alone in space would entail, with tongue firmly in cheek, and it’s equal parts disgusting and hilarious.

Your usual daily routine, before everything goes a little pear-shaped, consists of things like signaling Brane Co., sending back coordinates of constellations, and playing your space beacon (a MIDI keyboard you need to rewire and then play specific tunes on to alert other spaceships to your presence). Puzzles often have a coding (if this, then that) or logical quality to them. For example, to set up a signal to the corporation, you’ll need to consult your technical manual and work out where to place a set of jumper plugs in a grid of numbered slots so that the signal moves from the mainframe to your modem and then to the high frequency antenna. Even before everything steps up a gear when you try to rescue the stranded ship and Elle, little things disrupt your tasks as the days move on to make them that little bit harder, such as the signal to Brane Co becoming distorted. Now you’ve got to find a way to amplify it first, before connecting it up as usual.

You’ll be consulting your reasonably hefty technical manual, and Gorky, for hints on how to perform procedures like this, but both are pretty unforthcoming with advice – for one puzzle Gorky simply told me to consult the manual, which is littered with dense diagrams and scientific quotations. Clicking on those descriptions does give more explanation in a slightly-easier-to-digest account, but still I spent a lot of time just trying to figure out what I was supposed to be doing rather than actually solving the puzzles. 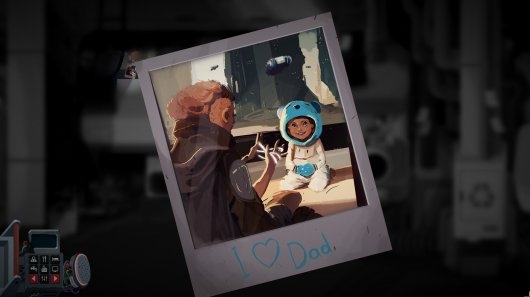 This is a running theme that only gets worse as the obstacles get more complex and are split into several subsections. For instance, changing the ping setting of a nearby satellite so that a missile collides with it (instead of the Bento) requires you to find your ship’s “public key,” then work out how to conceal your own signal, then access the ship’s database, then work out what the “private key” or ping setting is (by using a system of dice, one that tells you how many accurate key numbers you have and one that gives you hints on what the position of those numbers should be), and only then finally inputting your ship’s private key onto the nearby satellite. If you manage to get through all of this without once wildly clicking around your control room’s many switches and levers, furiously slotting in various computer chips and trying to find out what on earth a private key is, then you have a less focus-addled brain than I.

There is an option to make puzzles easier by clicking an icon in the corner of the screen, which either reduces the number of steps needed to complete a challenge, or sometimes wipes out the puzzle altogether. I only stooped to this level twice; I was reluctant to because you won’t get an achievement if you use it, but felt compelled to out of a desire to get on with the story. It was a last resort, as it felt quite unsatisfying to have to give in and especially to have the challenge skipped completely. When you do get the grasp of what you’re supposed to be doing and accomplish a particular objective it’s a great feeling, so it’s a shame that there isn’t a gradual hint system within the game that feeds you clearer suggestions if you’re stuck, so that you still feel like you’re deciphering something rather than giving in and missing something entirely instead.

Thankfully, even through some of the densest challenges, the intriguing plot and wacky characters made me want to persist. There’s a streak of dark humour throughout the dialogue, which pops up as text in comic book-style speech boxes. (Just wait until you find out what’s making the buzzing noise in one of the control panel’s cavities.) Your computer pal Gorky has particularly sarcastic sensibilities, his little cheeky animated face of various emojis flashing up on your ship’s computer screen to tell you to get back to work or when cracking another joke of poor taste. 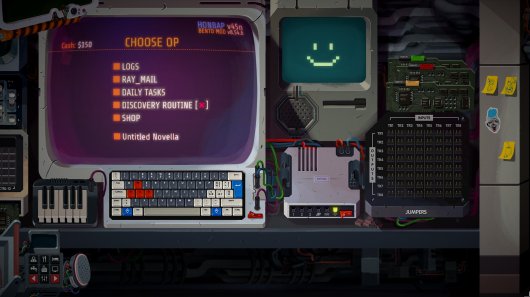 And then there’s Karl, whose tale of utter heartache made me shed the occasional tear IRL and is likely to do the same for anyone who’s lost someone close to them. Still There does a good job for the most part of depicting mental illness and specifically the mind-numbing struggle of depression. In one of the frequent dream sequences, a voice asks Karl if he’s okay. Even if you want to front up and choose the “I’m not OK” dialogue option, your cursor freezes, forcing you to choose denial. Near the end of the story this quiet, understated portrayal of the vicious forces that can bind someone to such demons does become slightly more melodramatic as Karl tries to come to terms with his past. Nevertheless, for the most part the game deals with its serious subject matter with real understanding, maturity and creativity – no mean feat at all.

As well as solving fiendish puzzles and urinating there are some small extra side quests to complete, such as playing chess with Gorky or caring for your pet tuatara. (You can even choose a name for said lizard, who I was then reasonably sad to see pass away due to my *ahem* forgetfulness. RIP Li’l Ricky.) These only serve as minor distractions to the main events, which, depending on how long you end up taking to crack some of the trickier challenges, will last you anywhere between 6-10 hours. Once you’re done there’s little reason to go back, unless you’re a completionist and want to get every achievement or take another crack at solving any puzzles you may have skipped on your own.

More casual gamers may find Still There floats too far into the stratosphere of the technical to really enjoy and appreciate its detailed world and myriad switches. On the other hand, an adventure that refuses to hold your hand can be a rare and sometimes appealing quality in these times of patronizing tutorials and simplified gameplay. Indeed, if solving intricately designed puzzles in a pretty environment alongside a thought-provoking narrative sounds like your bag, then buckle up – you’re in store for a wild space ride of buttons, bodily functions and baffling brainteasers.

Still There’s elaborate puzzles and willfully obscure explanations may scare off casual players, but stick with this meditative adventure and you’ll find much to enjoy within its thoughtful depiction of a lonely life in space.

GAME INFO Still There is an adventure game by GhostShark released in 2019 for Mac, PC and Switch. It has a Illustrated realism style, presented in Slideshow and is played in a Mixed perspective. You can download Still There from: We get a small commission from any game you buy through these links.
The Good:
The Bad:
The Good:
The Bad:

What our readers think of Still There