Quintus and the Absent Truth

You’ve probably heard of “room escape” games before, but a hall escape? Yes, in indie developer Dystopia Interactive’s 103, you can only hope to get INTO the one available room, instead being stuck perpetually roaming the surreal corridors entrapping you. The confined hallway setting borders somewhere between a nostalgic dream and haunting nightmare that you’re unable to physically interact with at all. That may sound hugely limiting, and in practical terms it is, yet you’re not entirely a passive observer, but rather the instigator of change in piecing together this eerie and very personal mystery. 103 is not a long experience, and certainly won’t be for everyone, but its environmental storytelling steeped in juicy atmosphere adds up to more than the sum of its parts.

Both the narrative and gameplay could rather facetiously be summed up as: nothing and nothing. Of course there’s more to it than that, but until 103’s hands-off philosophy begins to sink in and the nature of the backstory is more overtly teased, you’re likely to be wondering "what's this all about?" and even “where’s the game?!” You’re simply dropped into this seemingly benign scenario with no preamble or explanation of who you are, where you are, or why you’re here – or what must be done to get out. I despise the term “walking simulator,” but that’s truly all there is to do here at first – and you don’t have to walk far to loop back to the beginning. Using the traditional WASD keyboard controls to navigate, it’ll take maybe 45 seconds, tops, and only that long because the unseen protagonist walks oh-so-slooooowly.

That’s not a typo: less than a minute and you’re back where you started, having done nothing and seen not a whole heck of a lot. It’s not even a maze, just a small circuit with a few zigs and zags. That’s not to suggest there’s nothing to observe along the way, however. Indeed there is, but you have to really look if you’re to get anything out of the experience. The corridors have a very old-timey feel, lined with wallpaper and old-fashioned posters, framed photographs, cryptic notes and mirrors in which you can’t see your own reflection. Pay a little more attention, though, and you’ll begin to notice some macabre signs like shelves displaying skulls and miniature coffins, bottles of booze, and rows of lit candles. An ominous feeling permeates this place, even though nothing is overtly threatening or poses any danger. 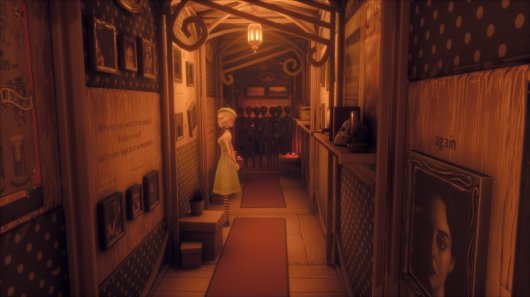 You’re not entirely alone in these hallways, though the others are not your typical NPCs. One is a young lady in striped stockings and a matching pretty dress and beret. She never speaks, because she’s a wooden mannequin – an animated puppet, mind you, as she’ll occasionally move about, peek around corners, stare out the lone window at an impenetrable rainstorm, and even gently dance when the mood strikes. You’re given no more insight into her identity than you are your own; she’s just a mute companion who never even acknowledges your presence. The other character does, turning his head creepily towards you whenever you pass by, but as he’s only a teddy bear, he doesn’t speak either. The only other signs of “life” in this place come from a group of other mannequins lurking in the shadows, occasionally blocking your path. What’s going on here??!!

In most adventures the solution to such a predicament is to poke around, click on things to examine them, and pick up everything that isn’t nailed down and start using them on other hotspots. Not here. Not only can’t you gather any inventory, but there is no “interact” button at all. There aren’t even any conventional hotspots. All you can do is LOOK. But therein lies the secret to success in 103: looking at the right things, in the right way. I can’t say too much for fear of spoiling what little actual gameplay there is, but suffice it to say that it’s important to stand right in front of anything of interest and aim your gaze directly at it. You should even linger a moment or two, as something might happen, but not always instantly.

Playing 103 is ultimately like following a trail of breadcrumbs, where each crumb is hidden until the previous one has been found. Look at one key object in the environment, then wander around, scouring the halls to see what has changed. Sometimes there are subtle (or not-so-subtle) clues about where to go next, but even if you’re not sure, it doesn’t take long to traverse the area completely, and you’ll soon discover a few key places demanding special and repeated attention. It’s a bit of stretch to call these tasks “puzzles,” but actual recognition of the clues rather than aimless wandering is both quicker and more satisfying. One particular sequence is much more involved than any of the others, though even it can only be solved through trial and error. 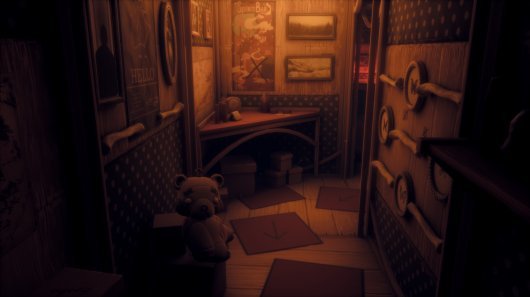 It takes a while before the small narrative pieces begin to fit together, but eventually a few more blatant changes start to occur that form a bigger picture, punctuated by the game’s lone voice-over narration from the British female protagonist. The specifics are best discovered for yourself, of course, but it’s not a spoiler to say that in life our real prisons are often constructions of our own minds, and you’ll quickly come to suspect that such is the case here as well. I can also say that even though you’ll have essentially worked out the mystery before the end, the final reveal still manages to pack a surprisingly emotional wallop.

Given the importance of observation, it was crucial for 103 to have a solid visual presentation, and for the most part it delivers. The main drawback, obviously, is simply the lack of scale, and even in that first 45-second circuit you’ll surely notice that several decorations appear in more than one place. What it lacks in variety, however, the scenery makes up in rich atmosphere, thanks largely to the lighting. By default the palette is a dreamy muted amber, but at times it delves into deeper reds, browns, and blues, giving the familiar corridors a much different look and feel. A few clever visual distortions are also implemented on occasion, creating an effective contrast from the norm that emphasizes your lack of control. There isn’t much to actually animate here, but you’d be surprised how disturbing it is to see silent puppets suddenly appear behind you, and at least one event relating to the lone female mannequin is genuinely chilling. This isn’t a horror game per se, but the hairs on the back of your neck will be at the ready, if not standing on end. 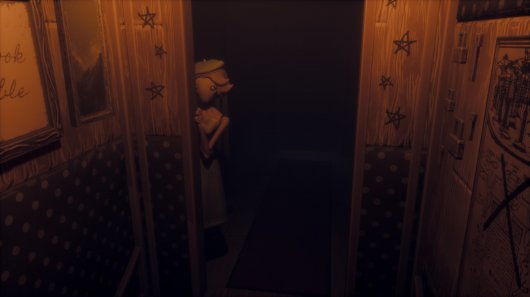 Contributing to the mood are sound effects that are sparse but effective, whether ticking clocks, creaking wood or pouring rain and thunder outside, along with the occasional haunting whisper and your own ubiquitous footsteps on wooden floors. The music, meanwhile, blends a variety of sombre strings and keyboards, sometimes adding xylophones to create a kind of melancholy music box quality. When not churning out static, the little portable radio serves up a jaunty tune, but as this plays over top of the ambient score, the different musical components end up clashing rather than complementing each other. Much more jarring are the moments of intentionally discordant orchestration, signalling a dramatic shift in tone to go with the more shocking narrative revelations.

103 isn’t just the game’s title, it’s a good estimate of its length, as a complete playthrough should clock in at about an hour, if that. Those looking for a deep plot or complex puzzles definitely won’t find either within these cozy-but-creepy corridors, and it’s true that at least a little more interaction would have been greatly beneficial. There’s a strict look-but-don’t-touch policy in effect, and while that’s very much in keeping with the dreamlike premise, at times it feels you’re just going around in circles, both literally and figuratively. Still, with the right expectations there’s enjoyment to be had in sussing out ambiguous clues while immersed in a surreal environment that feels more than a little off, so follow it to the end and you may just find enough surprises waiting around each corner to make it worth your while.

Short but surreal, 103 presents an intriguing exploration of a dreamlike series of corridors that you can practically complete with both hands tied behind your back.

GAME INFO 103 is an adventure game by Dystopia Interactive released in 2018 for Linux, Mac, PC and Switch. It has a Stylized art style, presented in Realtime 3D and is played in a First-Person perspective.

What our readers think of 103

I almost lost my nerve at the mirror puzzle, retried some 20 times, even with a walkthrough. Lowered the graphics and did it on one try. :/ Requires high-end machine to enjoy the graphics. Read the review »

Twelve thousand dollars to produce this?

https://youtu.be/kYF85Ifb5Lc?t=1347 Watching this in less than twenty minutes on youtube is an option for those of you who can't invest the time play. You play 'this' everytime you make a decision to drive after drinking,... Read the review »

A game everyone should have played. The message is too important!

The game is very short, but very nicely made. However, that does not matter for a game like this. The message is SO important, that everyone should have played it. This story can not be... Read the review »