Aspyr Studio is sure to turn some heads with its in-house VR development offering, Torn. Although the game borrows from a number of inspirations – some more overtly than others – at its core it’s a free-roaming puzzler set inside an abandoned mansion full of atmosphere and lovingly-crafted detail. While its gameplay mechanic, once grasped, is a bit of a one-trick pony, this is still an adventure that manages to satisfy in numerous ways, wrapped in a well-polished and shiny package, making it a feast for the senses as well as the completionist soul.

The game opens on video blogger Katherine Patterson taking a first-person stroll through the woods. After a few steps, a towering and foreboding mansion comes into view around a bend in the path. While there is no context for this place at first, or why Katherine has traveled to an obviously remote location to seek it out, a bit of backstory is eventually revealed. It turns out the manor, abandoned for over six decades, once was home to Dr. Lawrence Talbot and his wife, who both mysteriously vanished and have been missing ever since. Now Katherine has arrived to investigate the lonesome ruin.

One might be forgiven for mistaking Torn for a ghost story, as its setup is full of basic haunted house trappings. The game even encourages this misinterpretation via some early red herrings like mysterious voices and doors slowly creaking open on their own. Soon enough, however, the scary atmosphere is dampened (though never fully dispelled) and replaced with a far less malignant sense of discovery and exploration. Before too long, Katherine encounters a floating white speck, a sentient remnant somehow left behind by Dr. Talbot, who can still communicate with Katherine in his own voice. The Talbot speck acts as an early guide to explain the gameplay mechanics, and remains by her side to provide some history on certain rooms and objects as the duo continues their trek through the mansion. 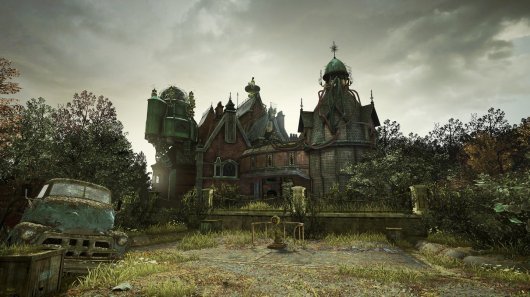 The object of the game is to find and collect dozens upon dozens of similar specks from all around the house, which prove to be memory remnants of the good doctor. Each room also has a series of circuits running through the walls and underneath the floorboards that must be completed. Using a gravity tool – in essence a handheld wand that lets you pick up and move even the heaviest things – you must locate items nearby that plug into the gaps. It’s not much more than a simple pattern-matching mini-game, though, keeping the level of challenge relatively low throughout.

The gameplay, engaging as it is, doesn’t develop much over the course of the four or five hours of play time. However, this task is as surprisingly satisfying as it is simple, with later rooms varying the formula ever-so-slightly by introducing new shapes, objects that must be assembled, and pressure plates to activate. The final section does break this pattern somewhat by requiring you to fix and then operate an epic-sized piece of machinery, but this task borders on patronizing as the Talbot speck guides you to and fro, doling out individual steps of a long to-do list rather than demanding any savvy or cleverness on the player’s part.

The only drawback to the gameplay is the fact that quite a few mechanics are packed into relatively few buttons, making the controls a bit cumbersome and not very intuitive to figure out, at least using the PS Move controllers. The main reason for this is that one controller is entirely devoted to handling the gravity tool – picking up objects, pulling them closer or pushing them away, and turning them so they fit into the circuit gaps. This all works well, but it relegates all character movement to the other controller, making it impossible to walk and turn at the same time, since pushing one button requires letting go of the other. It’s possible to slightly lean one way or another while walking by using your body, but true navigation requires constant pauses to align yourself before moving on. 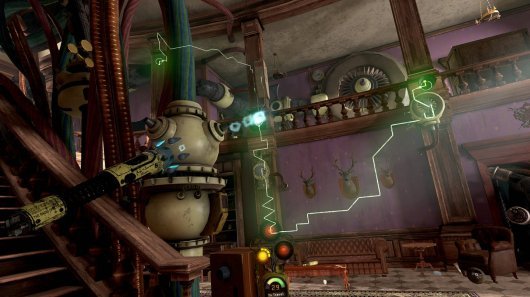 Completing the circuits in each of the manor’s eleven rooms, which can be visited and completed in any order once the initial ones have been cleared, earns you a key used to unlock the game’s impressively massive final location. After solving each room’s puzzles, players are also transported to a surreal, dream-like place where you will encounter the “real” Dr. Talbot – a talking, floating bubble of protoplasm. The doctor requires the specks you have collected to slowly regain his lost memories and reveal the story behind both his research and his and his wife’s disappearance.

In addition to the circuit puzzles, every room conceals a number of bonus memories to find, giving completionists something more to chew on. The process works like a hide-and-seek mini-game, keeping an eye out for objects that wiggle or jump about, then grabbing onto them with the gravity tool to release the memory imprisoned within. It’s a fun little bonus scavenger hunt, though the sheer number of hidden memories crammed into such a comparatively short game experience can feel just a little grindy, and an elusive few are annoyingly well hidden. A fun side effect of aggressively rummaging through each and every room, however, is the enjoyable chaos this causes as objects large and small are tossed about, adhering realistically to the laws of physics; it’s a virtual opportunity to live out the rock-and-roll fantasy of trashing a hotel room without consequence.

Allowing for everything to be picked up, spun around, and tossed about is only possible due to the dedication of the developers to fully model each and every in-game object in full 3D, with many unique items matching the themes of their respective rooms, such as gardening paraphernalia in the conservatory, or racks full of wine bottles in the cellar. It’s just one facet of Torn’s overall impressive visual design aesthetic, which is noticeable all throughout the adventure. From the lush foliage of that early forest trail, to the way curtains ripple realistically when your hand brushes against them, to the psychotropic neon set pieces constructed by Dr. Talbot deep down in his alternate dimension, the graphics are top-notch all around. 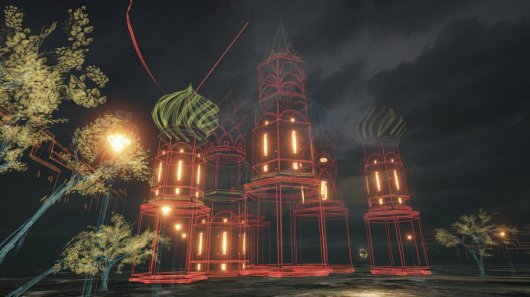 Rather than keep the mess from slinging hundreds of items around persistent, the game resets a room back to its original state after you’ve left it. Loading all those individual bits and pieces before a scene is entered each time can – and did on a handful of occasions – cause a bit of momentary slowdown in performance. With this many functional components littering the game engine, it’s also possible to get physically caught on even a small object, railing, or doorframe while walking through the mansion, requiring leaning back and forth and trying to move in various directions – basically doing the VR equivalent of wiggling loose – to get oneself unstuck, though there was one incident very early on when, upon leaving a cinematic, the game placed me in a wall I couldn’t get out of, forcing a restart.

Equally impressive as the graphics are aspects of the sound design. A strong soundtrack supplies the exploration with a due sense of leisurely wonder, but also knows the value and thrill of silence to build atmosphere in just the right moments. Of particular note is the incredibly strong voice performance of the game’s two leads, Dr. Talbot and Katherine. The doctor is tasked with providing essentially the entire narrative single-handedly, all while embodying a blob of gel. Katherine, meanwhile, is convincingly natural in the comments she whispers to herself while traversing the house, as well as during her interactions with Talbot.

Torn is an entertaining experience that is far more approachable than its creepy-mansion setting would seem to imply. An interesting story peppered between puzzle rooms and collect-a-thons will surely tick the right boxes for many players. Although the gameplay itself doesn’t offer much longevity or even variety, the satisfaction gained from wreaking havoc and snapping objects into place to complete circuits in virtual reality never gets old. With a great presentation and addictively rapid room-after-room pace, there’s always something else to check off your mental to-do checklist, and that’s a feeling already worth its asking price.

Torn is available at:

It’s a bit too straightforward to offer much challenge with its puzzles, and not spooky enough to sustain a haunted house thriller, but Torn will win players over on its own terms, providing a highly-polished, scavenge-heavy VR mystery.

GAME INFO Torn is an adventure game by Aspyr Studio released in 2018 for Oculus Rift, PlayStation VR and HTC Vive. It has a Illustrated realism style, presented in Realtime 3D and is played in a First-Person perspective.