CHUCHEL contains very little background art and no conversation, but these are scarcely missed as its extraordinary soundscape more than compensates. This game buzzes with tongue-in-cheek musical notes, antic movement and a fantastically creative acoustic palette. Everyone the protagonist meets emits wacky, emotive noises. A blue alien moans tunefully, puppies chant as they drift through the sky, the fiendish snowman snores and hisses, and a muscular storm cloud blasts forth in anger. When Chuchel manipulates gizmos they jingle and jangle, a boomerang warbles in the air, the peashooter bloomps as our hero blows, and cactus spines rasp as they’re pulled from his foot. Boxing gloves pzzz and zook when landing punches, triggering descriptive speech balloons so you know for sure they are pzzzing and zooking. 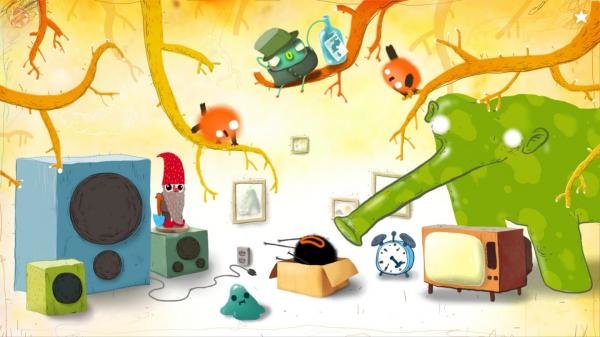 Still not convinced? Well then, wayward objects add to the zany atmosphere, as blondish comets giggle, a floating heart wails siren-like, kaleidoscopic light-shows sizzle, and a piano clumps to the ground. Chuchel himself reveals an unusual range of expressive utterances. He hums as he sneaks, bleeps as he ricochets, sings snarkily, whimpers in fear, shrieks in delight, and swears nonsensically when riled. Some of his oddest actions are accompanied by memorable fanfare, like the cymbal noise when he’s squashed into a pancake, or his dinging head when ideas surface. For taking us on such a clamorous tour of gleeps, slurps and pings, immersing us with audio gags galore, CHUCHEL scores a sonorous success and a much-deserved Aggie for Best Sound Effects. 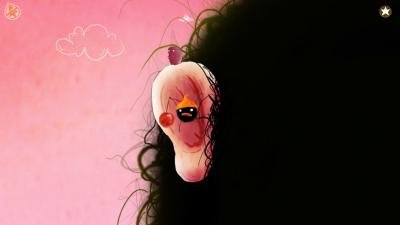 Most of the time people don’t even notice sound effects unless they’re done poorly – as evidenced by the fact that once again “no answer” is really the big winner in this reader category. But we’re in total agreement that in CHUCHEL you really can’t NOT notice them, for all the right reasons. Instead of a foley artist, Amanita must need a full orchestra to fulfill its sound design. A kettle drum tings as it scuttles by, a lightsabre buzzes, a tennis racket foops, and Chuchel snatches his hat from a giant cherry with a resounding boing. The written script must have looked like a veritable smorgasbord of onomatopoeia! Add in all the verbal performances as Chuchel blows raspberries when turned upside down or grunts and groans when exerting himself, and there could really only be one winner this year for best audio.