“Slow burn” is the term I’d use for the plot of 2004’s The Moment of Silence. It’s also how I’d describe the start of lead writer Martin Ganteföhr’s new adventure State of Mind, and for the same reasons. Sharing similar technological and societal themes and scenarios, the latter feels like a spiritual sequel of sorts, at least on the story front in the introductory demo I got to preview. Both visually and control-wise, however, this game is a long way from its predecessor and it took me some time to adjust to both those aspects.

The game opens with a lengthy montage cutscene that sees the camera sweeping through the streets of Berlin at night in the year 2048. With the gloom, the dark silhouettes of buildings, and the shop signs depicted in glowing neon, it has a very Blade Runner-esque feel. Beyond that, the other thing you’ll quickly notice among the robot police, homeless street people, and prostitutes (both robotic and real) is the stylistically low polygon count for the real-time 3D world the game takes place in. Aesthetic tastes differ, but I initially found the style very jarring as it’s evocative of those clumsy, blocky 3D graphics of the late ‘90s. Fortunately, characters here move with more fluidity than they did back then and I gradually came to enjoy the look.

The early stages are quiet, but in a low-key sort of way as opposed to no sound at all. My initial exploration was accompanied by simple background tunes played out on piano or winds. Low ambient sounds from the flow of traffic or the tweeting of birds can be heard in outdoor locations. During cinematics, the score does ramp up to the more bombastic, bringing energy and tension to those sequences when they become more action-oriented. The game is also fully voiced, with the few characters present in the preview performed well.

The adventure proper begins when your first playable character – Richard Nolan, a journalist for "The Voice" – awakens in a hospital after having been involved in a car crash. The doctor walks Richard through his paces to gauge how he’s recovering, which serves as a tutorial section for the main interface. Using a third-person, over-the-shoulder point of view with direct controls, State of Mind seems geared towards play with a game controller, although I couldn’t get mine to work with it. Instead I used the standard WASD and mouse combination, which I found wasn’t as tight as it could have been, with Richard taking a few moments to course correct when turning, even though the game ran at a silky smooth framerate using Unreal Engine 4.

After going through the basics at the hospital, Richard returns home to an apartment that is empty save for a robot servant that his wife recently purchased. Tracy and son James are nowhere to be found, so you guide Richard around the apartment (dodging the robot, who has a tendency to unintentionally get in the way), examining the various hotspots that are constantly marked by small floating green triangles. These form part of the augmented reality interface Richard has embedded in his head. Drawing close to one of the triangles displays its name and indicators for the buttons you can press to examine or interact with the object if possible. 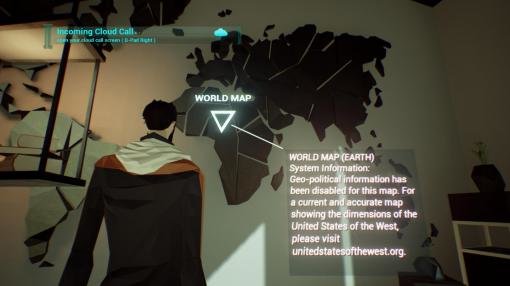 Once you’ve searched Richard’s apartment and learned what happened to his family, the game then transitions to your second playable character – Adam Newman, a journalist for "The Present" – who awakens at home where he’s also recovering from a car crash. His wife Amy isn’t there and he has to search his apartment and meet his young son John before heading out for the day. While Richard’s part of the story takes place at night under a dark cloudy sky, Adam’s is set during the day with nice, clean white buildings. Somehow that just adds to the sense of foreboding elicited by the medical center Adam has to take his son to for a daily checkup, the reasons for which aren’t disclosed at this juncture.

As the game progresses and more is shown of both Richard and Adam, it’s clear certain aspects of their lives are eerily similar. In the closing moments of the section I played, Adam’s existence is revealed to Richard. More specifically, the nature of Adam’s existence as a fractured, incomplete digital copy of Richard is revealed. Richard himself doesn’t remember how this happened but it’s explained that the defect is due to the digital copying – more a memory extraction – itself. Did Richard volunteer for this procedure? What went wrong? How is his family involved? And what will all this mean for Adam when the two finally meet in some form or another? These are the questions teased at the end of the demo and promising to pave the way for the rest of the story.

The preview took me 2½ hours to complete, most of that time spent with Richard learning the different control schemes. When his wife fails to return home or even contact him, Richard begins to investigate, during which time you’ll discover that their marriage hasn’t been doing well and Richard suspects there may be more to their absence than a visit to Tracy’s parents. All of this digging involves, among other things, contacting people through his AR integrated cell phone, reconstructing a digital surveillance image of his home, and overriding the controls of a security drone to fly it around a night club in order to conduct clandestine surveillance on the club patrons. Prompts and instructions for all of these different interactions are displayed on screen, and a good job is done in naturally introducing them within the story of Richard’s search for his family. 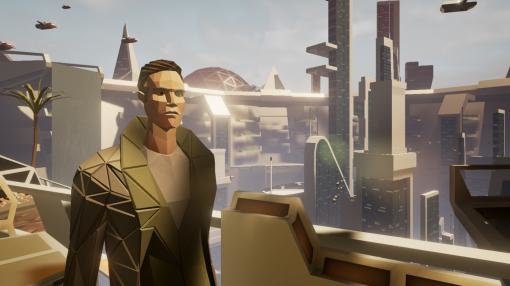 At least based on what was shown in the preview, State of Mind doesn’t go for “puzzles” in the traditional sense, as while you do have an inventory of sorts represented in the AR interface, you don’t directly interact with it. Instead the game automatically uses items you collect when appropriate, such as when offering a cup of coffee to a coworker as a dialog option. As such, most of the gameplay I encountered that didn’t require a special interface involved methodically working through all of the hotspots in each environment.

With its run-down but hi-tech future, intriguing connections between the two protagonists, and slow burn (so far) storyline, State of Mind looks to be the kind of contemplative science fiction thriller we’ve come to expect from Ganteföhr. The low-poly visuals and somewhat floaty controls (if these aren’t tightened before release) may take some getting used to for point-and-click fans, but shouldn’t be too much of a distraction once you adjust to them. Whether the full game can deliver on the story promises just barely teased here remains to be seen, but early indications are that we can look forward to another compelling narrative-driven adventure next month when the game releases on PC and consoles on August 15th. 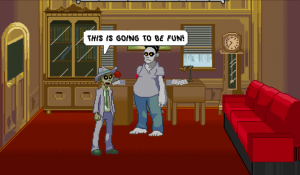 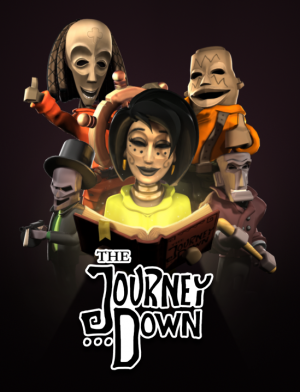