Rogue Quest: The Vault of the Lost Tyrant review

The jump from small freeware adventure to even a budget-priced commercial adventure is a deceptively large one, as the two simply can’t be treated the same way. This point was driven home for me as I finished playing Rogue Quest: The Vault of the Lost Tyrant, from the same studio that previously produced  two freeware chapters in the same series, The Crypt of the Leech King and The Curse of the Weeping Queen (both available for download from the developer’s website). On one hand, the new game represents more of the same light point-and-click adventuring as its free predecessors. On the other hand, as a commercial title it needs to be held to higher standards as it’s now competing with other games on the market, and in that respect it falls short of expectations in many key areas.

Cassandra Nech is an ambitious member of the renowned Rogue’s Guild, an organisation which gathers adventurers and treasure hunters. Cassandra has taken it upon herself to find and recover the legendary treasure of the Sea Tyrant, who has been dead for years after amassing his treasure and then hiding it.

If you think that sounds like a great plot, you’re right… except that’s not the premise of this game, as everything you just read has already happened in the past. You instead start out by entering the room where the Sea Tyrant’s treasure is located. Your first action is to literally pick up the treasure that’s sitting there, conveniently looking like a pirate’s treasure chest. 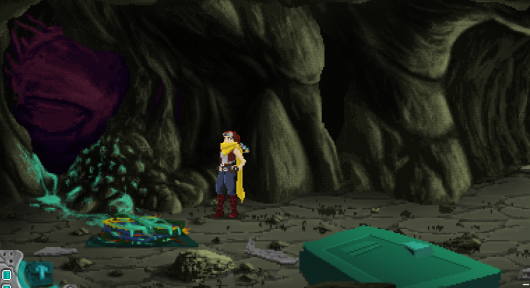 As Cassandra completes her goal with no help from you, the Pinnazza Brothers, two thugs who are also after the treasure, are revealed to have followed you. They gain the upper hand, steal the treasure, and leave you trapped in the Sea Tyrant’s caverns. The only thing of interest in the room, now that the treasure is gone, is an old computer mainframe. Upon accessing it, you quickly discover that the Sea Tyrant transferred his consciousness to the system before he died. It only takes a little persuasion to get him to offer you some help in the form of a potential way out.

From this point on, the core of the game is to simply escape the caverns you’re trapped in and reclaim the treasure from the Pinnazza Brothers while doing so. All that will take you about an hour. This is not a long game.

Cassandra’s backstory isn’t really covered in much detail – not much is covered in detail here – but there are enough hints and clues about her, the Sea Tyrant and the Rogue’s Guild to make me want to know more about this world. On a number of occasions, you hear about the many other quests Cassandra has been on, but you don’t learn anything about them or her. That’s a major failing, teasing just enough to make a player interested in discovering more but then offering nothing more to satisfy that curiosity. It’s like you’re dropped into the middle of the story but don’t really know what’s happened before. 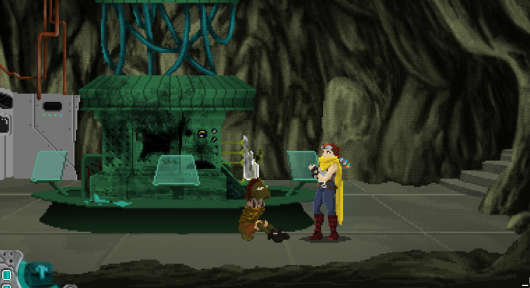 One thing I’m still not too sure about is the purpose of the Pinnazza Brothers. Are they included for comedy? Or are they supposed to be a legitimate threat? I didn’t feel like they posed any real danger, but their dialog, if meant to be comic relief, is forced and not funny.

Another issue with the script is that it blatantly tells you how to solve the next problem to overcome. It is never subtle or cleverly worded. For example, the Sea Tyrant / computer blatantly tells you at the start of the game that there is a trap door somewhere. It doesn’t take long to work out that it has to be located in the one place that has something covering the floor. While that can be excused to get players used to the game at first, this kind of obvious hand-holding continues throughout.

With either Cassandra or the computer clearly signposting what you need to do, Rogue Quest isn’t very difficult. Most of the puzzles are straightforward and won’t test anyone familiar with adventure games, though there are a couple that might require a bit more thought. One puzzle is a giant door with four revolving circles you have to align properly. The challenge here is to work out which of the symbols need to be aligned, although as usual, hints are given freely and the solution is simple when you’ve figured it out. The positive of the puzzle design is that all the solutions are fairly logical so there are no issues with trying to figure out the mind of the designer. 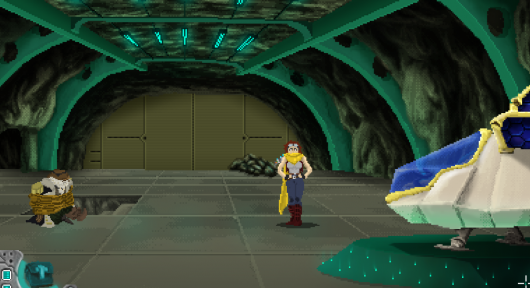 As a point-and-click adventure, Rogue Quest has a basic mouse-driven interface: click to walk, hover over hotspots to see if that’s something you can interact with. Inventory is accessed through a button at the bottom left of the screen, as well as a hint button that spells out what needs to happen next (if for some reason you can’t work it out from Cassandra’s long speeches to herself).

The graphics are done in the ‘90s pixel art style that has become so popular in the indie game community, although here they’re at a higher resolution than you’d have found in the classic Sierra or LucasArts games that Rogue Quest obviously draws inspiration from. The entire game is based underground in a series of caverns, and as we’ve seen in games like Wadjet Eye’s Shardlight, subterranean areas in a hand-drawn style can still look impressive and interesting. Unfortunately, here the caves all tend to look bland and boring, comprised of rock walls in the same brown and grey colours with little to distinguish each room. Some locations, such as a control room, have computer banks along the walls and machinery with pipes, but again the colours all blend together. Everything is dull and muted with little to distinguish any particular background from any other.

There are fewer than ten scenes in total, but there is at least one puzzle in each so it doesn’t feel like there are any areas with nothing to do. That said, for a game with only a limited number of backdrops that all look so similar, it would have been nice to have more hotspots to interact with. In general, everything highlighted has a purpose in the game. Given the lack of detail about the protagonist’s exciting life of adventuring prior to these events, this is a missed opportunity that could have been used to give more backstory and in turn provide more depth to a world we know very little about. 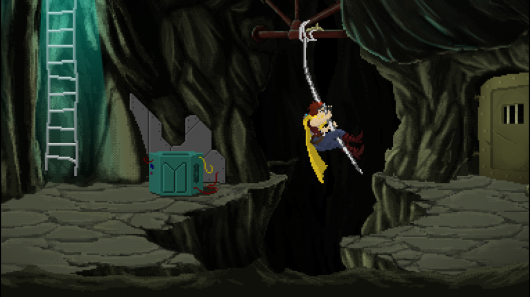 While the background art is at best average for a pixel art game, the animation is an area that clearly was given a lot of attention. Cassandra herself is well animated; she smoothly walks around the screens, turning when changing direction, and has idle gestures that add a sense of realism when she’s standing still. Other characters such as the main bad guys in this story, the brothers Needlebag and Finspin, also have a nice range of animations, such as wriggling when tied up, that shows this was an area of production that the developers really concentrated on.

The only other area I was really impressed with in Rogue Quest was the music. Each track perfectly fits the mood and greatly enhances the playing experience. The main theme in the caves does repeat itself a lot, but its creepy string instruments with percussion and key changes really do work well together in creating a tense atmosphere. Additionally, some of the minor scores such as the Pinnazza Brothers theme are nicely composed, adding some lighthearted sounds to a more upbeat track to suggest that the characters are supposed to be a serious threat yet also provide comic relief (even if they ultimately fail to accomplish either). 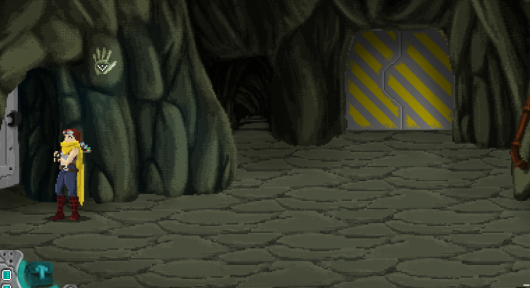 This is a very short and generally easy game, so much so that I’d almost say it plays more like an extended introduction to a longer series than a full game in its own right. And while the game doesn’t end with “To Be Continued,” it does have Cassandra announcing to nobody that “new adventures await,” suggesting that may indeed be the developer’s intention. But that potential future doesn’t add anything to the experience here and now.

If you’re interested in The Vault of the Lost Tyrant, I’d suggest checking out the series’ free releases first (starring a pair of other Rogue’s Guild adventurers, not Cassandra herself). Those games have many of the same issues, of course, but such things are easily overlooked with no price tag attached, and they’ll give you a good idea of what to expect and provide a little more bang for your Rogue Quest buck if you do decide that this one is worth a try. Otherwise, it’s difficult to recommend: too limited and too streamlined to be anything but disappointing in its own right, it feels like there could be a good story in here somewhere, and there’s certainly enough hints to make you interested in learning more, so it’s too bad that none of it is followed up on.

There’s some interesting background teased here, but Rogue Quest is way too short, starts unexpectedly in the middle of the story, and doesn’t really maintain interest even throughout its extremely brief length.

GAME INFO Rogue Quest: The Vault of the Lost Tyrant is an adventure game by Expera Game Studio released in 2017 for PC. It has a Stylized art style, presented in 2D or 2.5D and is played in a Third-Person perspective.

What our readers think of Rogue Quest: The Vault of the Lost Tyrant