Review for Without Escape

I felt quietly optimistic when I started in on Bumpy Trail Games’ slideshow-style point-and-click adventure Without Escape. After all, I enjoy a good escape-the-room mystery, and that’s basically what you’ve got here, only with the scope expanded from a single room to a whole house; an alternate dimension is even thrown in for good measure. However, a room-escape lives or dies by the quality of its puzzles, and unfortunately what's offered up here in this regard is, quite simply, just not up to snuff.

The game’s premise, which is delivered via simple on-screen text boxes, is quickly summed up. Home alone one night, you are awakened by a strange and mysterious sound. While exploring the cause of the noise, you repeatedly come across an odd symbol that causes you a headache. For the most part, discovering the meaning behind this symbol encompasses the full extent of the story.

To do so, though, you first have to be able to access the whole house. The majority of Without Escape’s puzzles involve getting into the different rooms, most of which are inexplicably locked from the outset, not to mention various locked closets and cabinets. But gaining entry to locked areas usually only involves finding a key, then backtracking to every single locked door to see which one it opens. The game uses a contextual right-click to perform every action automatically, from examining objects to moving to a different location, and even auto-using items stored in your inventory. 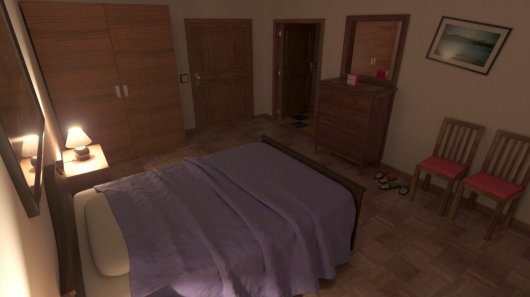 Sadly, the sequence of find key/open door is only occasionally spruced up by other inventory puzzles, 95% of which also weigh in on the simple end of the scale. With a small number of locations, each of which may only have a handful of hotspots and possibly one or two items to find, puzzle solutions are for the most part glaringly obvious. Can’t enter a room because it’s too dark? Never worry, because you’ll soon find a lighter. TV remote doesn’t work? You won’t need to guess twice where to use the batteries you find later.

At least a few puzzles try to stretch the norm a little by offering something deeper and more twisty. I appreciated having to grab pen and paper to solve a late-game mathematics puzzle, and another challenge caused me to go online and do some very brief research on my periodic table of elements, though I’m not quite sure why one wasn’t simply included somewhere in the game. But in one or two instances of higher difficulty, the solution to a problem was hidden by poor clueing, or by my simply having missed out on a hotspot while pixel-hunting, which is the only way to find all interactive items in a room.

Without Escape doesn’t break the mold as far as graphics are concerned either, with or without the default film grain (which thankfully can be switched off). Being a first-person point-and-click adventure, it consists of a series of still images that must be examined; moving the mouse over objects will change the cursor to let you know they are interactive. To the game’s credit, many scenes – particularly the ones in the “real world” – look photorealistic enough to appear as if a real location had been captured in-camera. However, this also means the setting is a little mundane, so the less realistic but more creative alt-dimension version of the house during the second half was very welcome. In fact, some of the imagery during this part of the game gets a little dark, even a bit gruesome in one case. 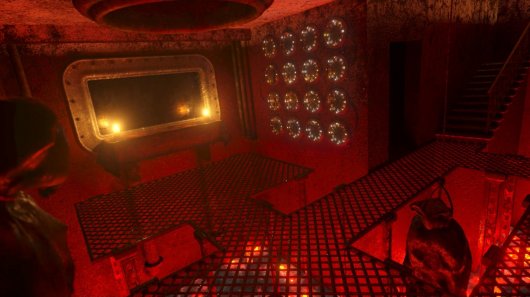 Music can be summed up in much the same way as the graphics. I liked the accompanying background tracks, as they are never overbearing and do a good job of blending somewhat into the background while providing an air of mystery to the atmosphere. But with such a short game, taking somewhere between an hour or two to complete, there just isn’t much audio here to critique, even less so with the total lack of any voice-over. Actions do, however, have crisp and clear sound effects, and a few times a sound will even clue the player in that something in a different location has changed.

Overall, Without Escape fails to leave much of an impact. This applies both to the majority of unimaginative puzzles leading to a fairly low challenge threshold, as well as the fact that the narrative, despite touting multiple endings, doesn’t provide much satisfaction. There is a definite end to the story, but it doesn’t hold up to scrutiny, leaving too many questions unanswered. There is never a rhyme or reason for what the noise was that woke you up to begin with, why doors were suddenly locked, and why you had to go through the game’s entire rigamarole in the first place. The multiple endings do not add any further complexity or illumination, a number of them simply resulting in you dying a number of ways, like remaining in a dangerous location for too long.

There are signs of what could have been in Without Escape. Decent graphical and musical presentations certainly keep the experience from being abrasive to the senses. There are even a couple of well thought-out puzzles to crack. But playing a protracted game of key/lock match-up isn’t my idea of a good time, and the story attempting to pull you through it ultimately just feels like a means to a forgettable end. Unless you’re just looking for something mildly diverting to fill an hour or two, I’d suggest bypassing this game’s potential budget-priced allure in the first place.

The few complex puzzles in Without Escape tease a more involved room-escape adventure with greater potential, but as it stands, there’s simply no escaping the fact that it isn’t much fun.

GAME INFO Without Escape is an adventure game by Bumpy Trail Games released in 2018 for 3DS, Linux, Mac, PC, PlayStation 4, Switch, Vita and Xbox One. It has a Illustrated realism style, presented in Slideshow and is played in a First-Person perspective.