Adventure games don’t need to be forty-hour epics to save the world. Sometimes they can be one-hour excursions through our own backyards, and so much the better if those locales include picturesque mountains, scenic seafronts, and quaint little towns to explore. Of course, take out all the puzzles along the way and the experience is bound to be an abbreviated one. If you’ve come looking for brain-busting challenges, there’s nothing to see here. However, if you’re interested in very personal, poignant stories with accessible gameplay and lovely rural vistas, there is plenty to see, hear and feel in the short but sweet Scéal and Leaving Lyndow.

For every blaringly loud, high-octane shooter out there, there is an equally quiet and relaxing adventure, not asking for (or eliciting) much adrenaline but providing a worthwhile soothing experience instead. Scéal, the debut point-and-click game from Joint Custody, falls firmly into the latter category. Taking roughly 60-90 minutes to play through one story path, this enjoyable “Irish Folklore Adventure” plays more like a click-through storybook than a true adventure game.

The basic premise for Scéal (Irish word meaning “story”) is endearingly simple. You play as a young spirit in a small remote village who learns her name is Iona. Unable to remember any of her past or how she became a spirit, Iona must perform certain tasks and find the three hidden feathers of the raven Branna, the Guardian of Lost Souls, in order to get her memories back. The game has three different paths that diverge only in the third and final chapter, but the game must be completely replayed to see all available possibilities. This feels like unnecessary overkill when the experience is otherwise exactly the same, though it is possible to play through once and be satisfied with your ending (narratively, if not necessarily emotionally). Each outcome is appropriate to the feel and tone of the story itself and speaks to its versatility.

Only a few characters are anything more than non-interactive props, and even the relevant ones are simple archetypes. Iona is the innocent, the confused and amnesiac spirit with a simple goal, while Branna is the wise advisor and spiritual guide. Without going into spoilers, there are also three villagers Iona meets along her journey who direct her and help illuminate her past. The lack of depth contributes to the feeling that you’re playing through a picture book – and indeed, all dialogue and story are conveyed through the pages of a book that opens up on screen when the plot is advanced.

The side-scrolling gameplay is very simple and accessible, if a bit tiring on your mouse finger after a while. (Scéal was tailor-made for a gamepad but offers no controller support.) Clicking near the glowing heart in the middle of the transparent Iona allows you to drag it and lead her where you want her to fly, levitating a short distance above the ground. In order to advance the story, you must find pieces of “cursed” scenery that require painting, which is done by simply clicking and dragging your mouse over the selected uncolored areas. Scéal lacks puzzles of any sort, which works fine in this case, but does make the game incredibly easy and quick to get through if you don’t get lost in the maze-like paths through town, up into the mountains and back down to the seaside pier. 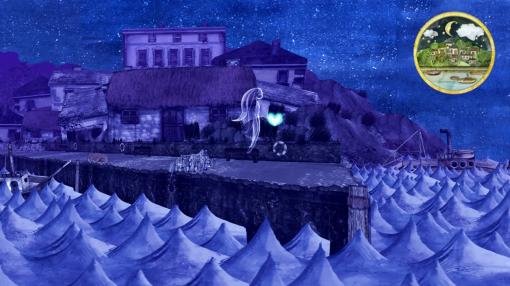 A mini-map appears at the top right of the screen at all times, which shows the general time of day but nothing more. However, clicking on it will call up a full-size map displaying the layout of the environment, your position and the currently active objectives. This is extremely helpful even after you get your bearings, unless you enjoy wandering aimlessly around looking for random locations—at least, random the first time through. Target locations don’t move from game to game, making it much faster to replay Scéal once you know where you’re going.

Of course, you’ll certainly want to do a little leisurely sightseeing at first, because it’s the art and sound design of this world where Scéal really excels. The scenery is breathtakingly beautiful, every background comprised of hand-painted watercolor images, with houses and other scenery popping up and down the closer or farther you get from them, just like in a child’s picture book. The colors are a gorgeous mix of greens and browns and blues for the most part, with lush landscapes to traverse—after all, this is taking place on the Emerald Isle.

As time progresses, weather effects like clouds and rain appear, and the day-night cycle envelops the countryside in different tints, from the warm yellows of late afternoon to the purple-blues of night, backed by a giant moon and a sky filled with stars. Painting the world makes it even more vibrant, but Iona’s mere presence is enough to impact the environment, as her aura streaming behind her gradually enriches the current scene’s hues without needing to paint at all. One scenario of particular note is when Iona briefly turns into a banshee and has to paint the world a deathly black amidst gusting winds, a stark contrast from the spring-like and uplifting original palette, but just as effective in conveying a different mood. 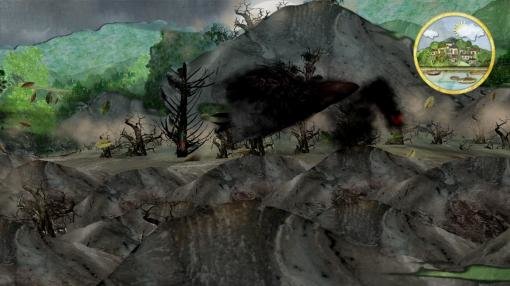 Scéal’s soundtrack pairs well with the art. With songs by contemporary classical Irish musicians Lorcan Mac Mathuna, Aislinn Duffy and Florence Glen, the tracks change with each chapter, flowing smoothly into each other the way the watercolor backgrounds flow together. The folk music is low-key and doesn’t distract from the story, but rather pleasantly supplements it with gentle vocals and percussion.

The world of Scéal is beautifully designed and executed, and my only real complaint is that the gameplay is so shallow that the experience feels more like a pop-up book that you click through than a true adventure game with puzzles and actual narrative depth. Still, the basic story is touching and the atmosphere so captivating that this is a worthwhile game to play when you have a few hours to fill on a rainy day.

A prequel of sorts to Eastshade, a painting-themed first-person exploration game currently under development, Leaving Lyndow is an hour-long tour of a portion of the same universe, intended to be a self-contained adventure. It features attractive 3D graphics, brief character dialogs, and simple interactions with a sampling of everyday objects. You assume the role of Clara, a junior researcher who is soon to leave home on a dangerous voyage sponsored by the Maritime guild. Before departing, Clara packs her bags, visits old childhood haunts, and chats with friends and family as they say their good-byes. It certainly isn’t very difficult, but the experience is short, elegant, luminous, and emotionally moving.

Lyndow is a town by the sea topped by an enormous moon, visible even in the daytime. Using the mouse and WASD keys, you’ll freely explore a handful of chapters, each based in a different location: a townhouse, a forest, a farm, the docks, and a tea room that looks like it ought to be a pub. (The tea is something special. I suggest that you have Clara drink lots of it.) 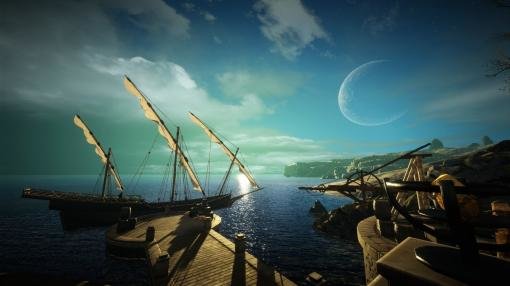 Each locale is compact, but lush and detailed, with a medieval-esque quality. You wander amidst bright swaths of color, admiring the trees, flowers, and sky. Leaves, plant stalks and blades of grass are angular and stiff, but this is balanced by the curves and arches of the stone buildings with patterned, filigreed-glass windows. It’s worth getting up close and personal with the windows and admiring the fretworked view.

The outdoor scenery is full of noise and movement: the shadows of birds overhead that warble as they fly, the billowing and crashing of waves, puffy seeds floating in the air, a bell clanging a warning. A rich soundtrack accompanies these scenarios, with soaring strings, a delicate piano backdrop, and a whimsical harp. The music adds a sense of mystery and anticipation, but also a dash of sadness, and never becomes repetitive. 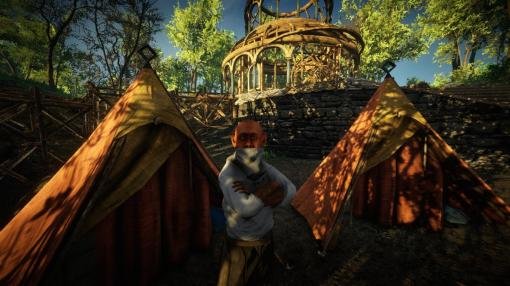 The characters Clara encounters have broad foreheads, shiny eyes, enormous ears and practically no hair on their heads. Their mouths are covered by scraps of cloth – not as tight as a gag, but with the same creepy visual effect. Conversations are via text with no voice-overs. Individuals have varied reactions to Clara’s departure: one is extremely rude, another appears jealous of Clara’s accomplishments, a third tells her that she will be “…the greatest discoverer on the seas,” and a fourth fears she won’t come back alive. Together, these dialogs portray Clara’s courage and resolve, as well as the acutely mixed feelings of those around her.

Most of the conversations require you to make a choice between two responses, but these don’t appear to have any consequences for the story. As you explore, you read a few letters and texts and examine objects that were important to Clara as she grew up. Twice your actions trigger a memory sequence, and by the end of the game these memories will have left a doleful mark.

Each location has a specific interaction you must engage in before you can leave: replaying a melody or throwing a ball against a target or gathering pertinent items. All are obvious, easy to complete with no traditional inventory, and with one exception really can't be considered actual puzzles. The game autosaves, though you can also save manually within each chapter so you don’t lose progress in that particular place (you can only return to the current location, however, not to earlier chapters).

A nostalgic glimpse of a day-in-the-life of its heroine, Leaving Lyndow shines an intense focus on a charming locale, quirky people and touching memories before Clara endures three long years of separation. As a prelude for what’s to come it’s a tasty appetizer, but consumed so quickly that it feels insubstantial. However, since I definitely came away with an appetite whetted for more engagingly picturesque discoveries in the Eastshade universe, let’s hope the wait for the sequel doesn’t last as long as Clara’s ambitious expedition. 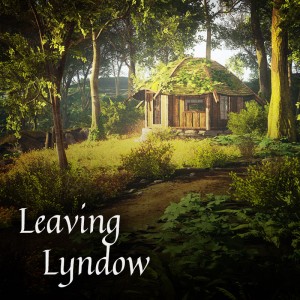 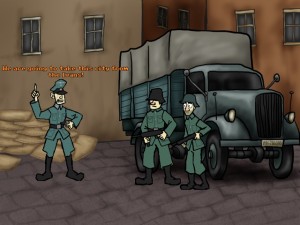