Review for The Guest

If there’s one thing we’ve learned since a very unceremonious reception at Stauf’s mansion so many years ago, it’s that being a “guest” in an adventure game is really code for prisoner/victim/lab rat. Whether the first visitor or seventh, you can be pretty sure that you’re not really a guest but an unwilling captive to a devious host. So it should come as no surprise that this is the case once again in Team Gotham’s The Guest, a room escape-style adventure filled with logical puzzles and an illogical, disappointingly obtuse story.

The Guest’s opening splash screen proudly declares itself a “first-person exploration game”. This is typically the more acceptable term for gameplay-lite adventures than that loathsome label I refuse to dignify by name but rhymes with “mocking stimulator”. The odd thing is that The Guest is nothing like the Dear Esthers and Gone Homes of the world. There is very little actual exploring to do, and a whole heap of gameplay crammed into its seriously confined space. It is first-person, however.

Your name is Evgueni Leonov, a scientist from Volograd who’s come to Boston to deliver a speech at a prestigious conference in the year 1986. At least, you intended to do that, but somewhere along the line your plans (and you) became seriously waylaid. Awaking in a strange room to a ceiling fan spinning lazily overhead and a door inexplicably pounding, it seems you’re a guest (cough) at the Oak Wood Hotel in Belmont, Massachusetts. But it doesn’t take Captain Obvious to explain that this is no normal hotel. Sure, it has a bed and the basic amenities, but it’s also dimly lit and largely adorned with wood antiques and other old-fashioned décor. Oh, and you’re completely locked in. You can’t even get into the bathroom at first, which sucks as that’s the first thing I need to do after a long sleep, particularly when one of the few sound effects is the pouring rain outside the hotel’s small translucent windows. 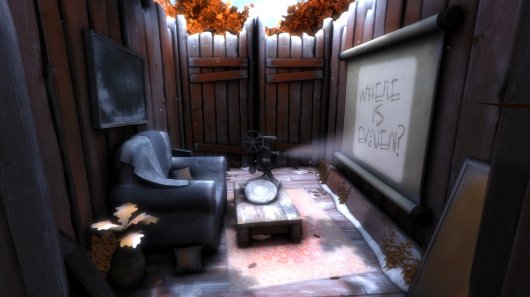 You’re going to have to hold it for a while, though, as you get used to the game’s mechanics and solve a few basic puzzles. The Guest offers full 3D movement via keyboard/mouse or gamepad controls, but you’ll only ever need to move a few steps at a time before bumping into the nearest piece of furniture or wall. A tiny dot in the center of the screen represents the cursor, which will light up any interactive hotspots or identify areas with close-up views once you’re near enough. Interaction requires just a simple mouse-click, and many items can be picked up for zoomed-in viewing and full rotation.

What’s unusual about this game is that you usually get to choose whether to stash the item you’re holding in inventory or put it back where you found it. There’s no apparent limit to how many items you can carry, so if you’re well-versed in the genre’s “pick up anything that isn’t nailed down” philosophy, you’ll probably be tempted to keep everything just in case. But there’s a reason you’re given a choice: many objects have no use at all, nor is there any obvious means of getting rid of anything you’ve collected. So it’s really up to you whether you want stuffed pockets full of red herrings or not. If you do opt for discretion, as I did, there’s no penalty for passing up something you’ll end up needing. It’ll still be there waiting when you go back for it, at most a mere four rooms away even when the game finally opens up.

When you need an item from your pop-up inventory, you simply middle mouse-click to access it. There you can select any item to view up close again (very helpful for clue-related documents), use on its own, or combine with other stored objects. That’s all fine, but there’s no click-and-drag option here, so you’ll have to completely close the inventory to try using an item. That alone is needlessly clunky, but what’s worse is that any selected item will become the default “cursor” option from that point on. If, say, you just want to open a door while actively holding an inventory object, you’re out of luck. You’ll need to ditch that puppy and go through the process all over again on the other side of the door. It’s not a big deal, but it’s so unintuitive that I kept bumping up against it. Also accessible from the inventory is a “diary”, but this is far less useful than you might expect, as all it does is record the few very sparse text comments uttered by the silent protagonist. 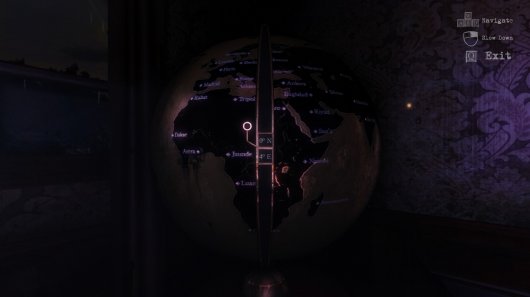 The first order of business is to get into the bathroom, which doesn’t even have a doorknob. You could probably find one, but there’s just not enough light in this gloomy place. Maybe the toolbox will – nope, that thing’s got a combination lock! Did I mention that there are puzzles in The Guest? Oh yes, there are really only three things on this hotel’s room service menu, and that’s puzzles, puzzles, and more puzzles. They start out easy enough, lulling you into a false sense of intellectual security, only to ramp up significantly over the course of the game.

Along with the inventory appetizers, puzzle dishes come in many flavours, ranging from fuse box sequences to colour patterns, symbol/alphabet substitution, cryptex codes, and making sense of geographical coordinates on a giant rotatable globe, to name just a few. Often the clues to one puzzle can only be found by solving other puzzles first, as progress is somewhat open-ended despite the claustrophobic setting. Generally the challenges are fair, refusing to hold your hand while providing enough clues to piece together the necessary details yourself, although one grid-related symbol puzzle completely flummoxed me and finally forced me to a walkthrough. That got me going again, but even now I still don’t understand the solution (although by that point, I didn’t much care). 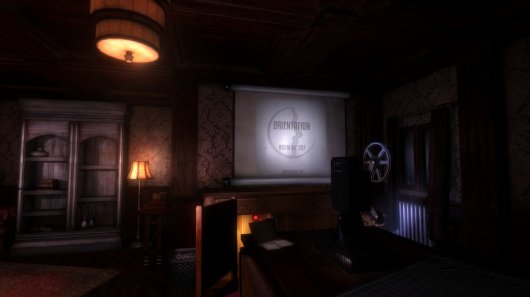 If you think escaping the hotel is the ultimate reward, think again, as your lone foray into the light daytime snow outside (wait, wasn’t it just raining and nighttime inside?) leads only to a confusing fenced-in maze. Not confusing because it’s so huge but because it’s as implausible as it is pointless, simply looping back on itself at the first wrong turn, starting you all over again from the beginning. Trial-and-error is your only recourse, and although it really doesn’t take that long, getting through it is nothing more than a matter of perseverance. Another puzzle likely to give people some grief is an alignment task that requires both mouse buttons to coordinate properly. The puzzle itself is fairly clever, but the mechanics can be a bit finicky. There is a random music puzzle that requires tone-matching, but it’s a lot more forgiving than it sounds.

While the individual puzzles acquit themselves nicely, my issue is that there are simply too darn many of them with too little payoff. Now, before accusing me of missing “the point” of a puzzle-centric game (even one that refuses to identify itself as such), the fact is that The Guest tries to integrate its gameplay and story but largely fails to find the proper balance. Other than the few times your efforts unlock a whole new room – including a living room and den-type area, plus one or two others of a more mysterious nature later on – often you’re solving puzzles simply for the sake of solving them, to acquire yet another hidden clue so that you can solve the next. Sometimes the actual reward for completing a puzzle is another puzzle right behind it! There’s rarely a sense of moving towards something or getting closer to a particular goal. You just keep working on one puzzle after another and figure eventually the game will get around to explaining what it’s all about. 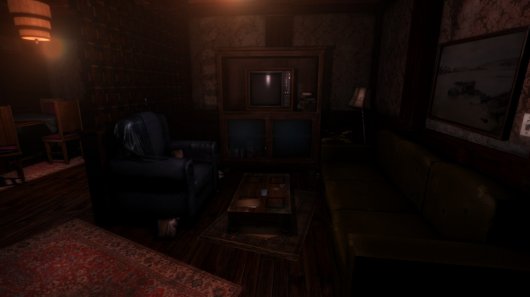 Eventually, of course, it DOES, although the revelation seemed more far-fetched than anything I’d been given any reason to suspect, or even particularly understand. The narrative fragments you pick up along the way tell you very little about who you are, where you (really) are, or why you’re there, often focusing on the fate of a colleague who presumably came before you, but not in a way that illuminates your current circumstances. A couple bizarre drug sequences do more to enlighten that aspect, but only to the extent that you learn something weird is going on in the name of science. If that sounds like a spoiler, it’s really not, as the connection is neither relevant nor ever once justified by the gameplay itself; you’re not asked to behave as a scientist, just an adventure game puzzle-solver.

The few hallucinogenic sequences represent the only variation in The Guest’s visual presentation, which otherwise consists of photorealistic depictions of darkened indoor rooms. The graphics are crisp and neat and nicely detailed, from patterned wallpaper to hardwood flooring to cracked bathroom tiles, let down only by the scant locations and oppressive dreariness of it all. This is compounded by a sombre tonal “score” that mainly consists of the same two organ notes repeating over and over. You get the opportunity to literally change the record to an actual song at one point, but overall the mood is a very bleak one. These are curious design decisions evidently intended to add a menacing atmosphere, but this seems at odds with the sedate pace, harmless setting, and (apparently) scientific conceit. It made sense in The 7th Guest at the home of an evil psycho killer; here it feels forced and unnecessary. The game could just as easily have taken place on a sunny summer day at the Ramada Inn with a few key renovations.

Ultimately, The Guest doesn’t much succeed at being a well-rounded adventure, so the more important question isn’t “is it any good?” but rather “is the glass half-full or half-empty?” Puzzle fans will find plenty to enjoy for 3-5 hours thanks solely to a wide range of brain teasers. Story shmory, right?! On the other hand, those who prefer narrative and exploration over continual conundrums will want to give this game a wide berth, as there’s very little of either on display here. So it’s either a game that overcomes its flimsy story backdrop and limited environment with a host of engaging challenges, or a game that generally fails to support its high-density gameplay with a sufficient narrative framework, depending on how you choose to look at it. Its final score reflects both halves, so it’s entirely up to you whether to book your own room as a guest of the Oak Wood Hotel.

The Guest is available at:

Puzzle fans will find The Guest a solid room-escape adventure, while story and exploration fans will have plenty of reservations.

GAME INFO The Guest is an adventure game by Team Gotham released in 2016 for Mac, PC and Oculus Rift. It has a Illustrated realism style, presented in Realtime 3D and is played in a First-Person perspective.