Batman is perhaps the biggest franchise that Telltale has tackled yet – or at least the most enduring. The caped crusader spans generations and has appeared in every medium imaginable, undergoing multiple iterations over the years while retaining the same core characteristics. The developer, meanwhile, has become synonymous with a particular type of episodic interactive storytelling that is heavy on conversation, player choice, and simplified action gameplay. A few new mechanics are introduced here, but Telltale’s Batman doesn’t stray far from the tried and tested formula. For the source material, though, it works quite well, allowing us to explore both Bruce Wayne and Batman while making use of different techniques.

In the first episode, Realm of Shadows, the focus is more on Bruce Wayne, the millionaire man behind the mask. It’s as Bruce that you get to converse with people the most, mingling with the rich, the mob and the press in your high-profile role as supporter and financial backer of mayoral candidate Harvey Dent. Anyone familiar with Batman stories will know the traditional future for Harvey, but there’s no sign of that here just yet; while he’s an imposing and bulky presence, towering over Bruce, he’s a man who genuinely seems to want to do better for the city of Gotham.

Our first interactions with Bruce take place at Wayne Manor, hosting an event for Harvey and hobnobbing with the affluent folks in attendance. One of Harvey’s main platforms is that he’ll be replacing Arkham Asylum, home to the mentally unstable, with a brand new psychiatric health facility. Bruce is clearly a trusted figure and politically influential, though public perception towards his secret alter ego is mixed. Nevertheless, it’s here that you can begin shaping the character. During conversation you’ll get a choice of four dialogue options to use at particular points; whether you choose to be flirtatious, sarcastic or direct is up to you. Some of these choices are given more weight than others, but each will make you ponder and there’s a good number of them spread throughout the dialogue.

It isn’t long into the campaign party that Carmine Falcone and his cronies enter uninvited. A businessman with a suspect reputation, Falcone is old and short-tempered, eager to flex his power and further exert his control. Whether you choose to shake his hand in front of your guests, for example, is something that will have a ripple effect. A timer quickly runs down, forcing you to be snappy with your decision. There’s never a "right" choice with such dilemmas, and you never really know what the repercussions are going to be. Though some might only alter the next line of dialogue rather than anything more meaningful, it’s always fun every time you get to provide input.

As you can probably tell, there’s no messing around when it comes to introducing the typical cast of characters, including Catwoman and James Gordon (still a Lieutenant here, not yet in his more familiar role as Commissioner). But that’s a good thing because it establishes them quickly and hopefully gives them enough room to be developed in future episodes. The only problem here isn’t necessarily related to the characters themselves, but rather that there are lots of story beats that have been endlessly covered elsewhere. Alfred the butler berates Bruce for pushing himself too hard; we learn Bruce’s parents were killed when he was younger; Gotham’s dirty streets are fuelled by government ties to crime, etc. None of this is new territory. Okay, for someone who has had literally no exposure to Batman this won’t be a problem, but for all others the ground being tread is repeated here and it’s a bit tiresome.

Nevertheless, there are some elements that move away from the ordinary. For example, Oz Cobblepot is reimagined as Bruce’s childhood friend who returns to Gotham with a string of crimes under his belt, frustrated to see how the park his parents built has turned desolate while his old pal is living the high life. He’s a threatening and unpredictable presence, saying he plans to dismantle the hierarchy, though his dodgy and fake-sounding British accent is off-putting. Moving forward, I’m hoping that Telltale continue to change our expectations of pre-existing characters and turn some of the series tropes on their heads.

Life as Batman, costume and all, is focussed mainly around brawling and detective work. The former is where the action takes place, in a series of button prompts guiding you through every punch, kick and jump. The fights are extremely cinematic, making great use of a quick cutting camera, slow motion and brash sound effects. I really enjoyed watching these, especially because it never gets old having Batman creep up on his enemies and take them out in inventive ways with his gadgets. The moment we first catch sight of Batman, swinging across from another building and smashing through a window, is excellent and very reminiscent of a scene in Christopher Nolan’s The Dark Knight film.

It’s very rare that you can actually fail during these action scenes, but there’s a reward for doing well. If you time your button responses properly then you’ll fill up a meter which allows you to deliver a powerful finishing move. Mess up badly and you might get a game-over screen, but you can instantly hop back in and won’t be penalised otherwise. It’s very forgiving, and perhaps too much so – on the one hand it maintains momentum no matter how you perform, but on the other it removes any real challenge and makes you question why you’re actually attempting to press anything in the first place.

You get choices to make as Batman too. Those you make as Bruce will often affect people’s opinion of you; those you make as Batman will do the same, just with more violence involved. On two occasions, you can choose to show someone mercy or hand them over to the police. I chose to play as mercifully as possible, so I was frustrated when Alfred berated me for beating a man “half to death” when I purposely chose to do otherwise. I’m hoping this was just a bug and that my pacifist approach (well, as much as is allowed!) will pay off down the line.

The quieter side to Batman comes with investigation. After being tipped off to check out a warehouse by the docks, the sight that greets you inside is a gruesome one: dead bodies and entrails are littered around, with scorch marks from an explosion on the floor. There are a few instances where the game isn’t on rails and this is one of those times. You can walk around these few areas at your leisure, though they're always very self-contained with minimal hotspot interaction outside those that advance the story, which can be limiting. In the park you can look at the graffiti on the wall, but it isn’t very interesting at face value and Bruce doesn’t even comment on it.

Once you’ve checked out the crime scene, you can then begin to piece together the evidence to work out what went down. What caused the explosion? Where did the bullets come from? The answers to these questions can be found by linking hotspots – clicking one and then another to establish a correlation. You’ll know by Batman’s response whether you got it right or not. When complete, the scene will be neatly re-enacted in front of you thanks to our lead’s advanced science tech. The mechanic is simple, but offers a welcome change of pace and it’s good to see Telltale trying new things.

There’s an impressive list of names voicing the characters, many of which will be familiar if you’ve played any of Telltale’s recent games. For the most part they do well, like Laura Bailey bringing a spark to Catwoman and Travis Willingham a certain gravitas to Harvey Dent. Troy Baker does a top job in the lead too, giving Bruce the necessary suavity and Batman the aggression. But despite the presence of so many industry veterans, there’s a stiltedness that often occurs in the line delivery across much of the cast, either from wrong intonation or lack of emotion. It doesn’t detract significantly from the overall quality of voice acting, but it is noticeable. 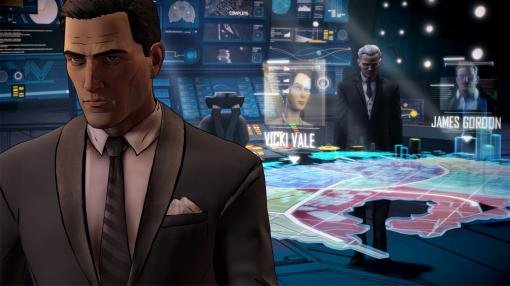 Realm of Shadows has a semi-realistic appearance, with thick outlines and inky, comic book-style textures and exaggerated facial expressions. It looks its best during the night and wisely the majority of scenes are set when the sun is down. The entire opening sequence is testament to this. Within the confines of the Mayor’s office, long shadows are cast and gunfire sparks up the room. Up on the rooftops, the glowing metropolis surrounds you in a sea of skyscrapers and smoke. When a news helicopter joins the fray, casting its bright spotlight on proceedings, everything feels even more pronounced. When I think of Batman, this is the type of imagery that comes to mind and it’s realised nicely here: dark and industrial, exactly the sort of setting where it makes sense for a menacing man wearing a caped black costume to perform stealthy takedowns.

Telltale’s regular composer Jared Emerson-Johnson never disappoints with his music and it’s no different here; the soundtrack throughout is excellent. There are the obvious upbeat tunes accompanying the action, with their rumbling drums and reverberations provides a heightened sense of pace and thrill, but the quieter tunes shouldn’t be discounted either. When Bruce is sitting across the table from someone, both parties more exposed than they would like, the slow piano background lends the scene a hint of melancholy and intrigue.

Disappointingly, technical issues interfered with my overall PC experience, despite my system more than meeting the requirements and downloading the update released soon after launch. I observed screen tearing and out-of-sync voices, but most frustrating was the slight pause every time there was a hard cut between scenes. This was especially unforgivable in the opening act, which switches periodically between Batman and Bruce in past and present, something that would have been very stylish had there not been a clear chug each time it changed. Telltale has long suffered from poor optimization in their games and there’s really no excuse for it.

Clocking in at around two hours, I was satisfied with Realms of Shadows when it came to a close. It’s an entertaining first episode in the season, technical problems aside. The balance between Bruce and Batman is well distributed, emphasising the political with the former and the punchy thrills with the latter. There’s a full cast of characters already established, so hopefully that means there’s ample room to explore their individual stories and twist fan perceptions to offer a fresh take. I’m looking forward to seeing how the tale develops and the impact some of my choices had – many were tough picks, even the simpler ones during conversation. My Bat-watch is counting down until the next episode. 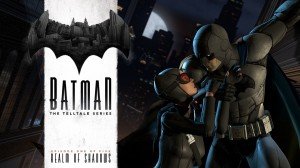 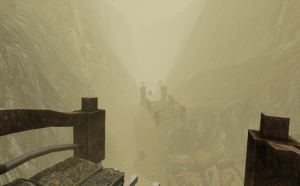 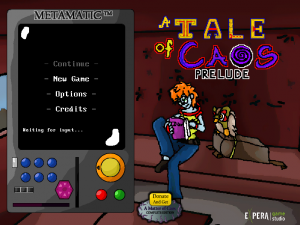