Some slick visuals and good intentions can’t make up for the fact that The Grandfather is simply too short and under-developed to deliver on its intriguing premise and experimental aspirations.

» Adventure Games DB
Advertisement
It will take you about 7 minutes to read this review.

The Grandfather begins with a jarring scene: a comic-style illustration of a naked old man, sitting on a toilet and sobbing. Superimposed upon the scene, his wife’s face is twisted into an expression of rage. Meanwhile, a disembodied, near-whispering female voice introduces the eponymous character’s plight – namely that this man’s wife is a coldhearted, angry woman who has made her husband miserable and desperate to escape their loveless marriage.

Created by two indie developers, The Lady’s Michael Patrick Rogers and David Szymanski, creator of The Moon Sliver and The Music Machine, this collaboration is billed by Rogers as being “based on a true story.” Considering the creative pedigree, it shouldn’t be surprising that The Grandfather is brief and experimental. However, that brevity is taken to extremes here, to the detriment of almost every single component of the game.

At least initially, the game does well at generating a feeling of unease and even dread. Following the introductory scene, the player is left at the main menu, a house with red glowing windows looming in the background. Upon starting a new game, the camera slowly zooms toward the building. Through the windows, you see the Grandfather floating like a fetus in the empty darkness, an umbilical cord attached to his stomach. 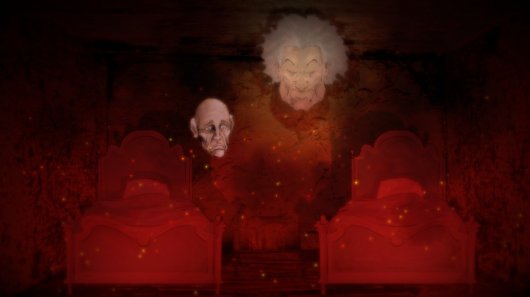 In these opening moments you are introduced to a 3D first-person sequence that repeats several times over the course of the game. Upon zooming in on the cord, the scene cuts to what appears to be a galaxy of stars that slowly swirls to reveal a tunnel (presumably the cord’s interior). The keyboard’s WASD controls allow you to walk through this tunnel toward a point of light where one of the Grandfather’s body parts waits to be retrieved.

Clicking on the highlighted body part results in some exposition from the narrator, who describes its significance to the Grandfather. For instance, the first part is his right arm, which will allow him to paint again. After this brief initial sequence, the game moves on to the first of six main levels, each of which is played in 2D third-person and presents a single room of the home where there is a puzzle to solve.

The puzzles are no less strange than the story, each involving the mouse being used to slowly maneuver the Grandfather’s floating head around a scene filled with various objects, some interactive and some not (with no indication of which is which). There is no inventory, so certain objects must be picked up and moved by hovering the Grandfather over them and holding down the left mouse button (yes, somehow his head is actually capable of lifting objects – perhaps that explains the intense grimace on his face). Generally you have no real guidance for what needs to be done, resulting in trial-and-error experimentation until something seems to work. 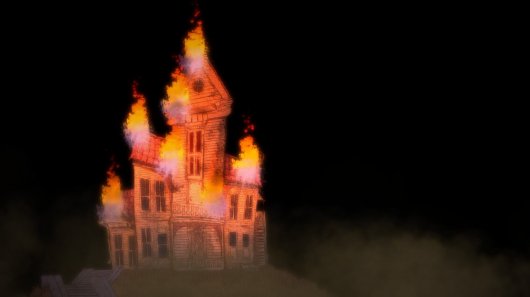 For example, the first level is the basement, which contains a furnace and washing machine, among other items. Particular combinations will enable you to put out a self-contained fire that poses no danger whatsoever. Meanwhile, repeatedly switching the light suspended overhead on and off leads to it changing color, then flickering, and eventually shorting out, which ends the level. It was only after finishing this first scene that I realized that extinguishing the light in the room was the point of the puzzle. While a few levels (or rooms, or whatever you want to call them) have fairly well-designed tasks, the majority of them are unsatisfying and feel like cryptic busywork with no real relevance.

Sandwiched between solving a puzzle and the next FPS sequence to retrieve another body part, illustrated comic-style panels (similar to the one opening the game) help tell the tragic story. While possessing surreal overtones, The Grandfather is really a straightforward tale of two people who have spent far too many years in a bitter, dysfunctional relationship. Although that may well fit its billing as a “horror” game, there’s not much that’s truly frightening about the experience aside from a mild jump scare or two. Blood makes a few appearances, and the Grandfather’s heart is represented as a sickly, deformed creature with shards of glass and nails sticking out of it. Ultimately, however, the game never rises above being mildly unsettling once the eyebrow-raising weirdness loses its novelty. 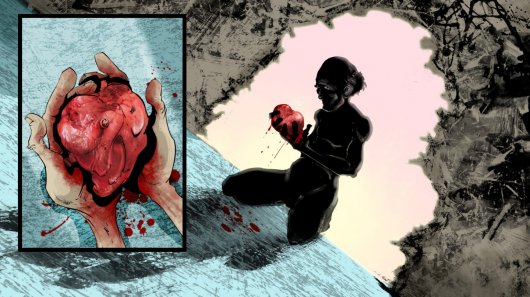 It soon becomes obvious that the three main elements of the game – puzzle rooms, comic-book-style exposition, and the repeated surreal treks through the Grandfather’s umbilical cord – are meant to be allegorical, but apart from a few moments when the narrator (who speaks in a low whisper that could have been creepy if not for the actress’s nasal voice and lifeless delivery) explains a particular event or image, there’s little actual information to go on if you’re trying to understand their significance.

This is especially true for the puzzles, whose bizarre mishmashes of odd tasks and surreal visuals – like using a plunger to try stemming the tide of blood flowing from bathroom fixtures – are ostensibly an attempt to represent the story chapters symbolically, but end up feeling isolated from the narrative. While I’ve always enjoyed symbolism in storytelling, pulling it off requires that there be enough substance to be layered and engaging, rather than merely vague and confusing. Unfortunately, The Grandfather spends more time being the latter than the former. Given enough time, I think the marriage of exposition and symbolism could have been interesting, but as it stands there’s simply not enough time to explore the possibilities.

None of the puzzles are particularly difficult to solve, and the game took me exactly 30 minutes to play from start to finish. Thankfully, it doesn’t leave you hanging and has a tidy (if dark) resolution, but the story is so short that I never had time to feel properly invested in it. Whether the brief playtime is a cause or a symptom of the game’s problems is difficult to tell. The Grandfather fell well short of its targeted crowdfunding campaign, leaving the developers with limited money to bring the game to fruition. That certainly doesn’t excuse all the issues on display, but it can’t have made them easy to overcome, either. 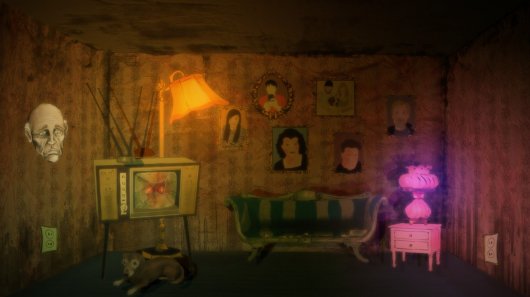 Graphically, The Grandfather features contrasting styles. The crisp, illustrated comic panels are juxtaposed by real-time rendering in the umbilical cord segments, with the puzzle levels comprising a combination of the two. The lighting effects are stellar, and light sources glow with vivid intensity, while objects in the rooms are 2D sprites illustrated to match the comic style of the story panels. The graphics end up being the aspect least affected by budget restrictions, and are quite atmospheric. The umbilical cord sequence is especially impressive to me: the combination of ghostly effects and organic, squishy-looking textures used for the walls occupies a space between disgusting and beautifully reminiscent of the likes of Dead Space and Doom.

The music is unusual in that it is generated on the fly, in response to the player’s actions. As you perform basic tasks such as picking up items and interacting with hotspots, synthesized sounds similar to distorted bells or gongs form a discordant and haunting anti-soundtrack. Even if you try to create some sort of rhythmic melody with your mouse clicks, the order of sounds appears to be randomly sequenced, a surprisingly simple way to keep the backdrop from becoming predictable or pleasant. The result is a disquieting accompaniment to gameplay, which succeeds in ratcheting up the tension somewhat. Of course, like everything else that shows promise in The Grandfather, this germ of an idea doesn’t have time to develop beyond a few repetitive notes, but a truly dynamic soundtrack like this is something I’d love to see explored further in other titles. 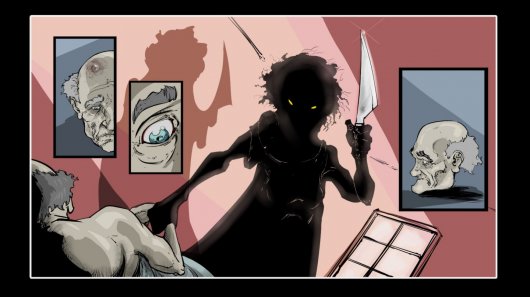 Sound effects are sparse, consisting of random creaks and metallic pops. For the most part these are suitably moody but otherwise not noteworthy. The narrator’s voice-over is not particularly effective at being creepy, and it clearly is meant to be. Compounding the distracting vocals and uninspired performance, the audio quality is disappointing, with a scratchy recording coupled with low volume, which occasionally makes it difficult even to hear.

If pressed to give a one-word description of my feelings toward this title, “disappointing” would probably be my choice. Based on the background information I’ve researched, The Grandfather was a very personal project for Rogers, which makes it all the more regrettable that it simply isn’t a very good game. Some bright elements occasionally shine through, such as the atmospheric graphics and nicely-drawn illustrations, the attempt to symbolically represent the story through puzzle-solving, and music generated in real-time based on player actions. Yet the narration is lackluster and the puzzles are woefully unsatisfying in their seeming randomness. The most damning problem, however, is the extremely short length, which just doesn’t allow enough time for any part of the game to fully develop, no matter how good an individual component might be.

Ultimately, The Grandfather seems more like an extended demo or a slightly-more-polished prototype. That makes the low retail price more palatable for what you get, I suppose, but ultimately this game doesn’t do much to distinguish itself even from the many fine freeware titles available. Having said that, there’s definitely some appeal for those, like myself, who are interested in the potential of games as an artistic medium. Indeed, few titles I’ve seen are brave enough to attempt such a literary approach to its overall design, complete with allegory and symbolism that you actually have to think about in order to understand. Beneath its shortcomings as a game, The Grandfather’s willingness to push boundaries renews my hope for the genre’s future. It might be cliché, but sometimes “better to try and fail, than never to have tried at all” is absolutely true. 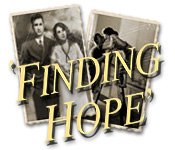 What our readers think of The Grandfather