It’s time now for the bittersweet awards. On the one hand, no game wants a Silver Aggie, because that means (spoiler alert!) it wasn’t able to claim one of our coveted golden statuettes, either from staff or readers. On the other hand, this distinction acknowledges those games that represented themselves extremely well throughout, if never quite on top, and there are so many adventures that would love to be in this position. These awards may just be honourable mentions, but their recipients are all very deserving of special recognition for a job well done. The common denominator? Each of these games (with one notable exception) is from a first-time developer! Is this genre stacked with promising young talent or what? That sure bodes well for the future. And as for the present, if you’ve passed by these games the first time around, we’ve got you covered. Everyone deserves a second chance. Very few titles thrust the player into the action quite the way Alice & Smith’s The Black Watchmen manages to do. As agents of the titular organization, players are tasked with investigating leads into an underworld of occult experiments and dark secrets that threaten the globe. The huge variety of brain- and reality-bending puzzles are the core of the experience, with real-world websites, social media accounts, and collaboration with other players making even basic gameplay anything but ordinary. But it’s the features borrowed from the Alternate Reality Game genre that make this title really stand out from the crowd. Optional “live events” bring the gameworld directly to willing players with the potential for phone calls, package deliveries, and even in-person meetings with the game’s characters throughout the course of a season. Added all up together, The Black Watchmen delivers a level of immersion and realism unlike any other video game in recent memory. Sometimes big things come in small packages. Incandescent little Bulb Boy’s idyllic life is rudely interrupted when a battalion of ugly and vicious monsters invades. The eponymously-titled Bulb Boy, by Polish indie studio Bulbware, is a wordless, inventive 2D point-and-click adventure with some mouse-based action sequences, following the physically fragile but heroic lead as he races to rescue his grandpa, a crotchety old oil lamp, from the clutches of his adversaries. The intuitive mechanics, smart puzzle design and occasionally tense action keep you hurtling from screen to screen as Bulb Boy explores the now-alien landscape of his home. Some sequences require strategy and practice (or extensive trial and error), to get the timing just right, but squeaking through such life-threatening situations is always perversely exhilarating. The stylistic choice of monochromatic screens and fluidly animated cartoony art works fabulously, combining with equally effective music and sound effects to deliver an immersive sensory experience. It’s a short game, likely taking no more than two hours no matter how often you die (and there are many bloodcurdling ways to bite it), but this rollercoaster ride of alternating horror and hope is a thoroughly enjoyable testament to what a small team can do with a limited budget and clever design. The end of the world is supposed to be a living nightmare, and Dead Synchronicity pulls no punches in presenting a bleak, post-apocalyptic world clinging to its last, desperate moments of survival. The debut adventure from Spanish developer Fictiorama Studios tells a dark dystopian tale that can be violently gory and disturbingly unethical at times, but in an appropriately mature way. And that’s exactly what you’d want from a game in which the vast majority of mankind has been wiped out and the remnants of society locked up in concentration camps in the hopes of isolating a disease that literally dissolves its victims. You can’t help but feel thoroughly immersed in this unapologetically gritty setting that is brilliantly depicted with a mix of painterly background art and Spanish expressionistic characters, and further rounded out with an impressive soundscape to boot. Both the puzzles and narrative are sure to make you think, and with the sci-fi story finishing on a cliffhanger that teases of more to come, we can’t wait to see the sequel from this talented team. Its titular star may be child with a naïve, innocent outlook on life, but Fran Bow is anything but a children’s game. In fact, just beneath its lovely hand-painted surface lies a deeply disturbing tale. Fran Bow is taken to the Oswald Asylum after the brutal murder of her parents. But she just wants to return to life with her aunt, so she escapes with her cat companion Mr. Midnight. However, the pills given to her at the hospital alter reality around her, eliciting visions of macabre, often nightmarish scenes. Yet the fantasy world Fran finds herself traversing on the treacherous journey back home is beautifully detailed with vivid backstory and a memorable cast of bizarre characters. Fran’s medication, and another mechanic that allows her to change the seasons, not only doubles the amount of distinctive artwork to admire, but also adds an extra dimension to puzzle-solving that is both fun to use and greatly increases the gameplay complexity. Fran Bow’s beautiful graphics and childlike point of view in the face of horrific realities skillfully balance the story’s dark undertones, and help make this impressive debut from the two-person indie team Killmonday a joy to play. Space is more than the final frontier in this tightly-written science fiction drama. The first adventure from Digital Media Workshop, Prominence was years in the making, but all the time and effort put into it paid off handsomely. As part of a planetary expedition to colonize a new world, you find yourself alone and abandoned in a mysterious transit complex. Gradually you unveil the dire events that overtook your colleagues as you access emails and skillfully voiced recordings that reveal clashing personalities, amusing anecdotes, cunning betrayal and self-sacrificial heroism. Polished soundscapes and sleek interiors add to the game’s futuristic aura. Puzzles are cleverly woven into the narrative, bringing you step-by-step to a series of truths about yourself and the crew, exposing the chance (through two different endings) to salvage the mission upon which an entire civilization now depends. In deciding to be a little more insistent on puzzle integration for this year’s eligible adventures, we were forced to leave out a great number of “not quites” with the increased industry-wide trend towards story-focused but gameplay-lite experience. Given their head start in leading such a paradigm shift, it should come as no surprise that Telltale Games managed to snag our Silver Aggie for best “almost” adventure. While clearly more of an interactive story than true adventure game, Tales from the Borderlands is an incredibly rewarding narrative experience that is bursting with character. Set in a world of murky morals, you take control of two devious but charming misfits as they set out to unlock a sought-after vault on the desert world of Pandora. Of course, nothing is going to come easy with so many others after the same prize, and guiding your course through this epic ride can be thrilling, hilarious, and even somewhat poignant, often within a short space of time. Brought to life through incredible voice acting and appealing visuals, the five-part series is a virtual page-turner that continually leaves you hungry for the next twist and turn. If you don’t mind a distinct lack of puzzles or even much free exploration, and the occasional Quick Time Event doesn’t make you break out in hives, Tales from the Borderlands is a journey well worth diving into headfirst. 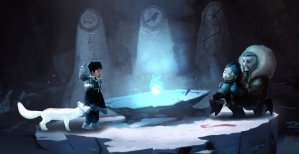