Johnny Hurricane and the Pirates of the Third Reich

Wadjet Eye Games has had great success publishing sci-fi adventures from upcoming indie developers, with the likes of Gemini Rue, Resonance, and Primordia already highlighting their catalogue. Now Technobabylon, the first collaboration between Wadjet Eye and James Dearden’s Technocrat Games, proves to be another fun, futuristic cyberpunk romp that fans of the genre are sure to enjoy for its gorgeous art, compelling plot and interesting setting, though the writing is not quite up to par with the level of quality we’ve come to expect.

A substantial reworking and expansion of Dearden’s trilogy of freeware games that debuted back in 2010, Technobabylon transports players to the futuristic city of Newton, run by an Artificial Intelligence (AI) named Central. The story starts off following two CEL police officers, Max Lao and Charlie Regis, as they chase a serial killer called the Mindjacker across Newton and try to prevent him from striking again. Also involved is a woman named Latha, who’s addicted to a virtual electronic world called “Trance” and ends up getting stuck in her apartment in the first five minutes of the game. The adventure follows these characters through several murder investigations and into drug dens and bioengineering labs as they attempt to unravel the mysteries behind the serial killings, blackmail and terrorist attacks. The two stories are disconnected at first, but it’s clear from the get-go that they are really intertwined, though they don’t fully converge until the last portion of the game.

The world of Technobabylon is rich and creative, with its own unique vision of the future. While not a completely dystopian society governed by a Skynet-like entity, the city of Newton is run by an all-powerful and all-knowing AI system that receives orders from the human city council. It’s an interesting blend of man and machine, a theme that continues throughout the game, with things like internet-connected wiring in people’s heads and artificially grown wetware, a seemingly organic substance that can be used as a hacker tool. Most characters seem to favor the technological upgrades, with the exception Charlie, whose sanctuary is a rooftop garden and who refuses to allow wires in his head. 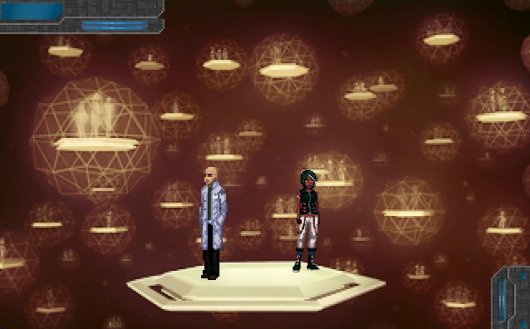 The sheer number and variety of settings is also amazing, ranging from the neat and organized CEL headquarters to an organic hydroponics lab to the grimy train station where a bomber is holed up. One place that especially impressed me was the digital world at a Trance den. This den is set up like a digital club, with a bar and dance floor as well as two game rooms, including one where you could repeatedly experience the end of the world in all its apocalyptic and explosive glory. The people inside the Trance world can look like whoever or whatever they want, which only adds to the appeal. Try arguing with a floating head while a pink bunny with spaghetti arms dances like a tripped-out druggie in the background behind you; it’s definitely an experience.

Unfortunately, despite the depth and creativity presented in the world itself, the story can be very confusing, which is its only major drawback. Plot threads become overly convoluted, as does switching between three protagonists with no form of diary or notes to remind you of what’s already happened to each character. By the end I couldn’t keep track of how many villains there were or whose side they happened to be on at any given moment. Characterizations are also weak for the first half of the game, as we are told much more about the characters than we are shown, which makes them feel very one-dimensional. Luckily, the second half is much better fleshed out.

My favorite character of the main trio is Dr. Max Lao, despite the fact that she is the only one without a real backstory. An ordinary girl who wanted to become a police officer, her cheerfulness and spark keeps her partner Regis’ cynical doom-and-gloom attitude at bay for most of the game and brightens up the atmosphere considerably. In a game that has such a dark plot with so many terrible things happening, Max’s character provides the perfect balance to the mix, adding the sense of hope the story so desperately needs. 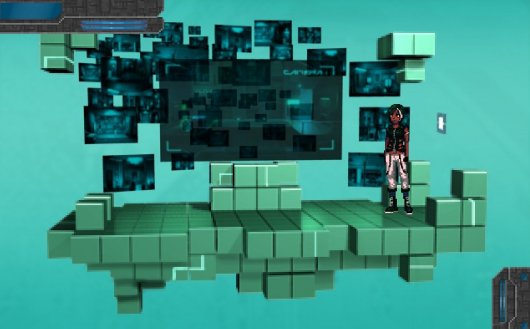 Regis, on the other hand, falls rather flat into the stereotype of a smart cop who’s good at his job but is burdened by a tragic past. Flashbacks help establish his wife’s character and give his backstory a little more depth, but he is still not a very well-rounded protagonist. Much is revealed about his personality through exposition before we ever see any evidence of it through his actions, and the latter don’t add anything to what we’ve already learned, serving only as a signpost saying: “Yes, that’s right, we told you he was tortured. Here’s your proof.”

Latha Sesame, aka Mandala (her Trance name), is the only character I actually disliked. We’re led to believe right from the start that she’s something special without being given any evidence for it, and for the better part of the game she remains wholly unremarkable, coming off like a bit of a Mary Sue. The one exception is that she’s addicted to a form of electronics called the Trance—clearly a metaphor for drug use—but she suffers no negative side effects from it, while other Trance addicts are portrayed much more negatively as homeless drifters, and some practically brain dead. While there is an explanation given eventually, her unexplained resistance is the only reason to think she’s at all special until that point. 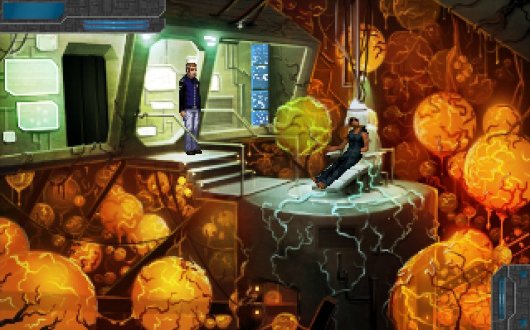 The technology of Newton isn’t very well explained either, which leads to many puzzles turning into veritable guessing games of “Let’s see what happens when I stick this here,” rather than intuitive problem-solving. For example, the exact capabilities enabled by the wiring in people’s heads are unclear, and the results seem to vary from character to character. It also took me a half hour to figure out I had to stick the wetware onto anything electronic, going against 24 years of being told to never put electrical equipment near anything wet. Had the concept of wetware been adequately detailed from the start, its application would have been a much less frustrating experience. Although after finishing the game, I’m still not entirely sure what the rules are for what it can or cannot connect to.

Almost every single time you change locations there’s a new objective for you to complete, as well as new characters to talk to. Puzzles are all item-based, involving both inventory and location-specific objects, and they occur very frequently. For the most part the puzzles themselves aren’t actually difficult once you sufficiently grasp the world’s rules. There are many hotspots throughout the game, most of which are needed to advance the game or solve a puzzle, though there are some that are purely optional. This comes in useful for puzzle-solving, knowing that just about everything will be used eventually.

Controls are simple and introduced right away—left-click to interact, right-click to examine. Character switching is imposed for the first 90% of the game before providing the option to alternate between them via icons in the inventory. It’s all pretty straightforward, but the game took me quite a while to complete, largely because of the lack of hint system or even hotspot highlighter. Throughout most of the game you can talk to other people who might offer you subtle hints in conversation or clarify the current objective or the way certain technology works, but if that doesn’t do enough to help you, you’re on your own. Without getting hopelessly stuck, you can probably expect to finish the game in under six hours. 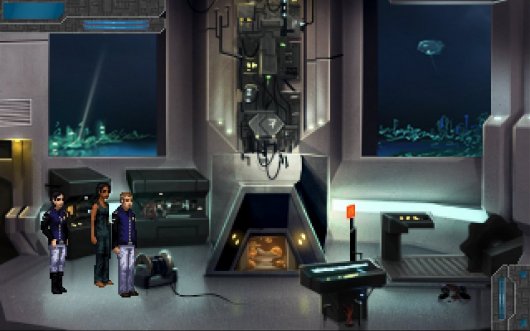 The low res pixel artwork is absolutely gorgeous, by far the best aspect of Technobabylon, as expected from artists Ben Chandler and Ilyich. The backgrounds are nicely detailed, with little things like animated bulletins and cleaning robots serving to enhance the futuristic world-building in small but appreciable ways. The character portraits are also detailed and change facial expressions frequently as people talk, which significantly improves the conversations. Animation is clean and smooth, with only a few hitches walking up platforms, which look slightly awkward but don’t pose any actual problems with the gameplay. There’s ambient movement in most locations to make the city feel more dynamic, from the nameless, faceless agents in the hallways at CEL headquarters to a dripping puddle of goo in Latha’s grungy apartment.

Voice acting is passable, though far from superb. Emotional moments, particularly at the end of the game, tend to fall flat, and some of the cast come across as hamming it up a little TOO much (looking at you, Chantelle), though others like Regis’ former scientist colleagues Doctor Chigwa and Nina Jeong are perfect. There is also an achievement-worthy objective to “Find Abe Goldfarb” among the character roster, though I guarantee you’ll be surprised when you do encounter this familiar Wadjet Eye voice veteran. Despite some dubious acting, all of the voices fit the characters well and the game is perfectly cast, if not perfectly performed. And if you don’t want to listen to it, you can always speed-click through the dialogue.

The music is thankfully not electronic or techno, which often tend to get lumped in with the cyberpunk genre. Instead, the soundtrack provides a soothing mix of classical and New Wave Trance, with plenty of futuristic sound effects thrown in for good measure, oddly complementing orchestral pieces that include Beethoven’s “Moonlight Sonata”. Unfortunately, there are no music cues for dramatic moments or to punch up the occasionally funny dialogue.

There are at least two choices you make during the game which can affect the final outcome, adding a degree of replayability to see what happens by making different choices. As with other Wadjet Eye games, there’s an option to turn on a developer’s commentary, adding prompts for some additional behind-the-scenes insight that can add further value to a replay. Presumably the story is a lot easier to follow the second time as well. Even the first time through, however, Technobabylon is a fun, futuristic romp that fans of cyberpunk will love, with fantastic settings depicted in stellar pixel artwork. Despite the confusing plotting and tendency to tell instead of show that lets an otherwise compelling story and diverse cast of characters down somewhat, it’s another great addition to the Wadjet Eye sci-fi game catalogue.

Technobabylon is a beautiful, compelling game that fans of the cyberpunk genre will devour, as long as you don’t mind a bit of story confusion along the way.

GAME INFO Technobabylon is an adventure game by Technocrat Games and Wadjet Eye Games released in 2015 for iPad, iPhone, Linux, Mac and PC. It has a Stylized art style, presented in 2D or 2.5D and is played in a Third-Person perspective.