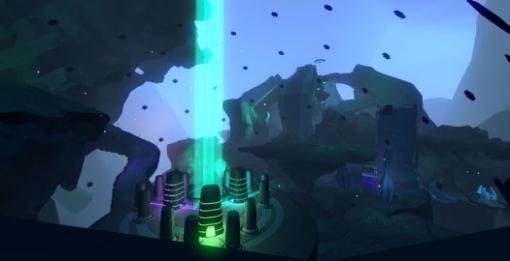 In the uniquely experimental FRACT OSC, players enter into a bizarre geometric landscape that seems to be holding its breath, its abstract heart barely alive, reduced to pulsating, electronic tones. Your efforts gradually awaken this dreamlike world, as color blooms and sound booms. White circles reverberate as you transport through them. Giant platforms rumble and are mashed together. Neon light-pillars buzz, machinery whines, and echoes vibrate upwards. Chasms open to dizzying drops; if you leap, static crackles on the landing. Puzzle grids resound to your touch, triggering layers of tonal cadences.

As you progress, you unlock a giant synthesizer, an electronic playground for sound sequencing and modulation. And finally, caught up in a spectacle of aural and visual sensations, you bring all previous puzzle elements together in a rhythmic, kaleidoscopic, resonant finale. The goal is ultimately to revive this desolate world with sound, making it all the more important to create an immersive audio stage upon which to play. In accomplishing this so convincingly, FRACT OSC silenced all other competitors to earn this year’s Best Sound Effects award. 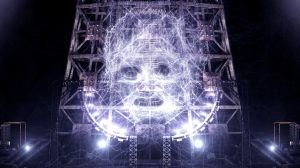 Sound effects are an unheralded aspect of game design, rarely noticed except when done wrong. In turn, many developers often give short shrift to this aspect, figuring that good enough is… good enough. But the best games recognize its importance in maintaining immersion, even if it never gets any attention. The year 2050 provides an intriguing soundscape for Tesla Effect. There’s the whooshing sound as Tex’s speeder lands, the shlink of an electronic syringe, the shlunk of a high-tech door, or the zing as Tex puts his hand through a hologram. Some sounds are more mundane, like the slow-motion clunk of a golf club, followed by a thunk as the ball rebounds against Tex’s head. Or the all-too-familiar beep and boom of a just-activated motion sensor mine. And there are horrifying sounds, like the screeching and buzzing of giant bees, the throaty roar of zombie-esque mutants, or the sound of distant thunder as Tex (once again) finds himself looking down at his own tombstone. You readers obviously liked what you heard, and that low rumbling noise is the sound of the Tex Murphy Aggie juggernaut rolling on.

Next up: The Silver Aggies!