We get a small commission from any books sold.
All Bitmap Books
Written by
Randall Rigdon — July 18, 2014

Isolation is often an inherent theme of adventure games. Frequently we find ourselves dropped in a setting where our protagonist is the only person around. In a game with a title like Lifeless Planet, this feeling of isolation is clearly implied before ever setting foot on alien soil, though it turns out you’re not entirely alone. On a one-way mission to a distant, mysterious planet, an astronaut crashes on an uninhabited planet with nothing but a damaged jetpack and an ambition to venture forth across the desolate landscape in search of oxygen and his missing crew. It’s a premise that creates expectation for an epic sci-fi journey, but the end result all too often ends up going nowhere fast.

The look and feel of Lifeless Planet is definitely its strongest quality, with deserted dunes of dust and sand sparsely adorned with strange organic debris, implying not all may be as it seems. While the planet initially appears to be an enormous, open-world environment, in actuality the journey becomes very linear very quickly. As you guide your spacesuited astronaut in third-person perspective, you lumber around steep cliffside paths and harrowing, windy terrains, always searching for the most effective way to traverse the rocky landscape.

The sharp 3D graphics and bleak setting provide a strong sense of atmosphere, further reinforced by the eerie and often well-composed soundtrack. Music is present throughout the adventure, often consisting of distant, echoing synthesizers that paint an air of mystique over every stark and lonely scene. Occasionally an orchestral anthem will play at the unveiling of significant plot developments, although for most part the tone is fairly ambient. 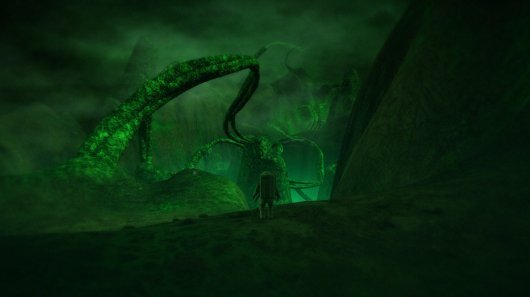 Unfortunately, the mood is rather quickly destroyed by the poor voice acting of the main character, who interjects occasionally with a very tired, static performance. The actor does sound like a legitimate middle-aged astronomical expert, but he also sounds like he lacks any spirit, entirely devoid of character and emotion, even during inherently emotional situations. This makes him hard to connect with when he deadpans observations aloud, which never meshes well with the otherwise engaging atmosphere.

While Lifeless Planet lacks combat or any intense action in its exploration-based gameplay, one misstep or ill-timed jump and you will most certainly die – frequently. This makes navigating each scene an elaborate puzzle as you wind your way around constantly perilous obstacles in the environment. And for the first half of the game, this feels like a rather creative and novel approach.

Often the destination is right in front of your face, but there will be a natural impediment preventing you from reaching it easily. A cliff may be too high to climb, so you will have propel yourself from rock to rock with the help of a jetpack that only supplies a single, tiny burst (effectively serving as a double-jump), along with figuring out strategic methods of moving through twisting branches and attenuated stone risings. You’ll also find yourself reshaping the environmental path so you can meet your desired ends, usually involving the use of an interactive boulder or some sort of other object that can be maneuvered around to further reach new heights. 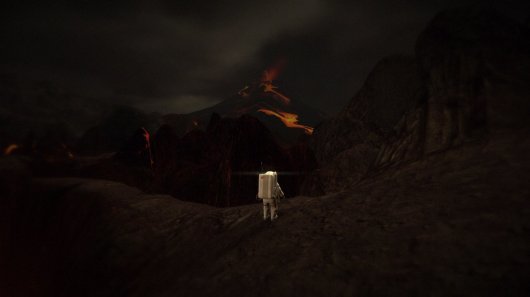 Unfortunately, the keyboard controls are rather poor, lacking the precision required of the game’s more meticulous platforming demands. The main problem is you can only jump in the exact direction that your character is facing and the WASD keys are extremely touchy, making it a hassle to align the character. You also have to align the camera with the mouse before each jump, which is especially problematic during the occasional timed jumping sequence. An option to center the camera helps rectify some of the difficulty, however, and the controls are more comfortable with a gamepad, with the usual left-right stick combination for movement and face buttons for jumping and interaction.

The platforming itself is actually designed rather simply, relying not on fast reflexes but rather your exploration skills and ability to assess the environment. This makes for a leisurely challenge, focused strongly on discovery and simple problem-solving. Unfortunately, as the game progresses, instead of building on the formula by implementing fresh game mechanics, the same challenges simply become longer and more elaborate. Given the difficulty of the controls, this ends up stretching out what would otherwise be a fairly short game to six artificially long and increasingly wearying hours.

As you venture out across the planet, you soon learn that it was previously inhabited by portal-jumping Soviets, making Lifeless Planet feel like a forgotten Twilight Zone episode. As you follow their trails of records through various small, abandoned colonies, you’ll find scattered recordings about their discoveries. These primarily exist to provide context about the tasks at hand, but the whole element lacks any subtlety, undermining the pervading sense of isolation on an alien world with a somewhat campy Cold War sci-fi backstory. 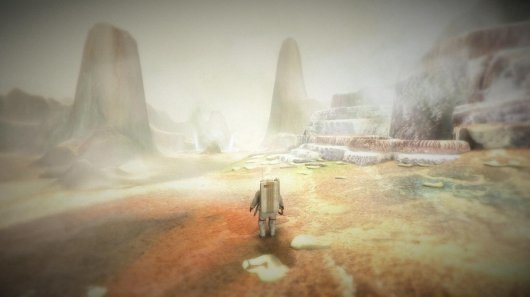 
While you don’t actually encounter any Soviets in the game, you do see a feminine alien inhabitant in the distance early on, and it becomes your primary objective to trace her steps (which isn’t all that difficult, since the ground turns green right under her feet). This singular focus contributes to the game’s overall tedium, as the entire game after her introduction reduces down to an ongoing chase sequence. The Soviet backdrop remains relevant for a while, but gradually it dwindles down until it disappears entirely.

This pursuit turns the game into a linear progression, constantly navigating from point A to B, following the bright green trail. Initially it worked rather effectively on me. For the first half of the game I was fairly impressed by the environmental puzzles I encountered, as I continuously overcame obstacles using clever and unconventional means in a quick and engaging fashion. It made for a fun adventure with believable sci-fi scenery – one sequence walking atop telephone wires above a barren, echoing valley made for an especially remarkable experience. 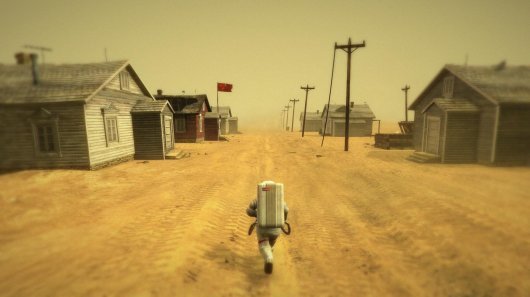 The novelty wears off after a while, however, and the game’s repetitive nature really diminishes the experience throughout the second half. The environments, initially impressive in their arid desolation, for the most part become disappointingly bland and similar throughout your travels. Each time the scene moves forward to another setting, the only real variance is in very small details, such as the color of the ground or how bright it is outside. Scenes without a lot of light, which comprise a fair portion of the adventure, tend not to be as visually compelling or as easy to navigate as the brighter environments. An option is available to lighten darker areas but this doesn’t create any significant change. Often you’re required to use your flashlight, which helps with finding your path but doesn’t do much to illuminate these dimly-lit areas.

Although scattered too few and far between the bleak, barren scenery, there are moments of exceptional beauty in Lifeless Planet. A petrified forest makes for an intriguingly creepy atmosphere while the contrast of human technology amidst otherworldly deserts is always striking. The game even boasts a few Earth-related moments amongst its mostly Mars-like environments. These come in the form of soft-focused dreamlike visions, providing glimpses of our protagonist’s time on Earth. These moments are brief, however, and the powerful contrast from the rest of the game really serves to highlight the need for more variation in an otherwise uniform aesthetic.

The gameplay rarely seeks to reinvent itself either once its core formula begins to cycle. There are a few moments where the damaged jetpack acquires an oxygen boost, vastly opening up exploration to make better use of the overall space, which is especially rewarding. Also, the use of a robotic arm that you can maneuver in first-person view during specified moments lets you pick up and move around space rocks with a claw so you can drop them in specific places to energize alien machinery. 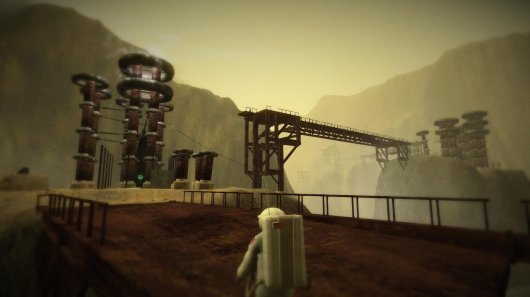 However, these are really the only two changes in design through the entire journey, along with the use of very occasional and always oddly-placed dynamite that simply blasts away specific obstacles. You’ll find yourself looking forward to that rare jet pack boost or robotic arm sequence, because without them you’ll be spending the rest of your time continuing to hop around yet another barren environment in order to reach your next destination.

Another unfortunate shortcoming of Lifeless Planet is the fair number of technical issues. I played the game on a Mac, so perhaps this doesn’t apply to the PC version, but all too often I found myself caught in an infinite loop of death at a nearby respawn checkpoint, or full-on having to restart a chapter because a necessary item got caught in an inaccessible spot. Fairly regularly, sound effects would improperly begin and end as well. While the sound design is always fairly realistic, it becomes painfully annoying when it sounds like you’re walking through water when you’ve been walking on sand for the last ten minutes.

Despite these downfalls, the game does tie up all loose ends rather effectively in its final moments, so the actual conclusion is not at all a let-down. It’s entirely predictable, but is nevertheless a fairly satisfactory ending. It’s a shame that in between a very strong start and reasonable ending that the game is bogged down by its lengthy, unchanging middle ground, which recycles its few working concepts relentlessly without scenic or gameplay variety and is dragged down by poor controls. Even with this repetitive filler, Lifeless Planet has enough redeeming qualities to cautiously recommend it as a novel and fun-for-a-while adventure. But like its stranded protagonist, you’ll want to get off this Lifeless Planet sooner rather than later.

Once the novelty of its promising premise and fun environmental puzzles have worn off, Lifeless Planet’s repetitive scenery and gameplay drag the experience back down to earth.

GAME INFO Lifeless Planet is an adventure game by Stage 2 Studios released in 2014 for Mac, PC and Xbox One. It has a Illustrated realism style, presented in Realtime 3D, Slideshow and is played in a Third-Person perspective. You can download Lifeless Planet from: We get a small commission from any game you buy through these links.
The Good:
The Bad:
The Good:
The Bad:

What our readers think of Lifeless Planet