Your mother, the great explorer, has gone missing again. All she left you is an old biplane, a letter, and a map. The map marks the way to the fabled Sea of Giants, rumoured to be a place of mystery and wonder. Encouraged by your mother’s letter, you follow the directions on the map to this legendary location. However, when a thunderstorm brings your plane crashing down on a remote island, all seems lost. But the strange ruins of this island seem to speak of a great lost civilisation, and there is more than a hint of magic to the place. Perhaps there is something to your mother’s tales of wonder after all. Alas, whilst easy on the eye and providing a passable challenge, a thin storyline and immersion-breaking gameplay make Sea of Giants a mobile adventure that’s not as wondrous as its premise.

Like many casual games, the presentation uses a first-person slideshow style. The artwork, whilst sometimes fantastical in content, is realistically depicted and hand-drawn to a very good standard. You start on a simple beach, but will soon find yourself exploring the ruins sprawled across your landing place and a smaller neighbouring island. Although nature has tried to reclaim much of the architecture, there are still magnificent stone carvings to be seen, both simple decorations and representations of strange creatures. These also include some pleasant animations, as a fountain spouts water, and the branches of trees sway as in a gentle breeze. When you take certain actions, these are animated as well, though the tools you use perform their work without the user’s hands being visible. The overall effect of the graphics is to successfully present the awe-inspiring land promised by the opening story.

The background music is provided by a fairly simple tune that plays throughout. This consists of a soft, echoing choral chant, supplemented by subtle strings, that fits well with the setting. The sound effects are decently handled as well. Running water has a realistic sound, shutters rattle when opened, and stones make a scraping sound as they are slid around a puzzle. There is also a victory trill that sounds when you achieve something that advances your quest. The letter from your mother is spoken aloud at the start, but there is no other voice-work during gameplay. This is an odd choice, since recording voices for only a handful of player interactions would not have been overly onerous. Overall, whilst not producing any spectacular surprises, the sound-work is sufficient to give further depth to the world the graphics create. There is also a single song that can be played again from the main menu once the game is completed. This is a little over two minutes long and is played in full just before the last simple puzzle, then played again over the ending cutscene. 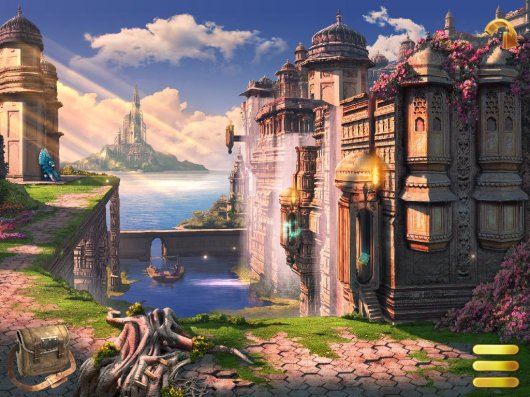 Control on the iPad is handled by a simple tap system for most purposes, with a single touch on the screen interacting with everything. For some puzzles you must press and hold, allowing you to move items around. The game has two modes, casual and veteran. While there are no hints or puzzle skips in either mode, under casual, hotspots sparkle briefly each time you enter a scene, though exits do not. Given the wealth of detail in the backgrounds, this is likely to be needed for some smaller items. Fortunately, the difficulty setting can be changed throughout, allowing those using the veteran option to seek temporary assistance in locating an elusive hotspot.

Navigation can be somewhat confusing at times. Only rarely as you advance is the new location entirely visible from the previous one, so you usually don’t know where, for example, an arched tree avenue will take you. Indeed, in a lot of ways the locations feel unrelated, with only a few showing a logical progression from their neighbours. Returning to earlier locations means travelling backwards using a back button on-screen, removing even the minimal visual clues of the locale in that direction. Whilst not an issue when you first pass through a location, it becomes one when inevitably forced to retrace your steps. The fact that the game world limits itself to branching paths rather than interweaving routes at least makes it relatively easy to check all areas, but I still found on more than one occasion that, on obtaining a new item, I had to spend some time hunting for the place I knew it would be useful. This is not helped by the fact that you need to visit all but your initial landing site more than once over the course of the game. A mini-map, or some other faster means of travel would have been helpful, but none was available.

But this back and forth travelling does have a purpose. There are puzzles scattered across both the initial crash island and a neighbouring island. Some of them involve fairly standard inventory use, with a variety of mundane and mystical keys to be collected. Others require inventory combination, such as gathering the tools necessary to mend a broken stool. There are a variety of standalone puzzles as well. These include classics like manoeuvring a collection of blocks to release one specially marked stone. There are also some original ideas, including a simple but cunning puzzle to reattach circuitry. Some of the puzzle types are repeated in different ways, but there has been a real effort to add variety into the puzzling on offer here. On veteran difficulty, the standalone puzzles are made more difficult, such as a pattern-repeating puzzle requiring you to remember longer, more complex sequences. 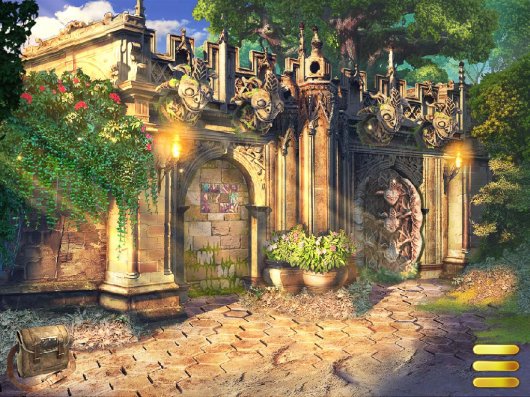 The problem is that the puzzles continually pull you out of the game world. This is partly due to the lack of story. After the initial introduction, the story effectively goes away until quite near the end. Some background to the Sea of Giants itself would have been welcome, but the strange ruins and statuary are left unexplained. The player character occasionally makes a text observation about their mother telling them of an area or item, but these are as abstract as the areas themselves. It does not help that the same observations are repeated each time you visit a location.

Far worse than the lack of story is that the puzzles themselves too often rely on game logic. A carnivorous plant occupies the centre of a wide path, but you are not allowed to use the routes well out of its reach to pass. A hammer that is robust enough to secure several nails apparently crumbles to dust after use. Cobwebs cannot be swept away by hand but require a specific flimsy item for removal. Even solving some puzzles can prove disappointing. Overcoming several puzzles, I finally acquired the key to a lock I had seen early on. Using this key revealed the grand prize locked behind these layers of puzzling: an ordinary gardening glove. This is a typical design approach to casual games, but that doesn’t make it any more excusable.

Available for both iOS and Android platforms, Sea of Giants is by no means an unpleasant experience. The backgrounds are gorgeous to behold, and there is plenty to do on the journey. But I expect an adventure game to pull me into a new world, and here the game fails to deliver. As attractive as they are individually, the locations feel like a bunch of scenes thrown together rather than a cohesive place, and there is no relevant story to pull players onwards. Add to that the lack of real world logic to the challenges on offer, and the game feels more like an abstract puzzler than a full-fledged adventure. I somewhat enjoyed the few hours I spent with it, but it’s a game as quickly forgotten as it is played. If you are looking for a bit of very casual adventure gaming on the go, then you could do a lot worse than this. If you want an adventure with a bit of depth, then sadly Sea of Giants proves to be a dip in the shallows, and not the deep blue sea the title promises.

Whilst a pleasant diversion, the lack of story and immersion-breaking gameplay will likely make the memory of Sea of Giants sink without trace after finishing.

GAME INFO Sea of Giants is an adventure game by Zoolax Inc. released in 2014 for Android, iPad and iPhone/iPod Touch. It has a Illustrated realism style, presented in Slideshow and is played in a First-Person perspective.

What our readers think of Sea of Giants