We get a small commission from any books sold.
All Bitmap Books
Written by
Randall Rigdon — April 15, 2014

A feeling of deja vu filled me as I drudged through the monotony of Mount Olympus: surely I had already played this game with these same puzzles and identical interface, only under a different name and similar setting. However, it wasn’t developed by the teams behind The Lost City, Tipping Point, Ferris Mueller’s Day Off, or any of the other recent mobile adventures released, although I wouldn’t have been surprised if it was. Is the state of first-person iOS puzzlers really so devoid of originality that new titles are already beginning to feel this interchangeable? At least for this particular adventure, the unfortunate answer is yes.

Emulating the better parts of earlier adventures is certainly understandable, but Mount Olympus is so like its counterparts that essentially the same criticisms can be applied. For example, the map provided is exactly the same one as in The Lost City, displaying merely a confounding grid of boxed images and criss-crossing lines with no interactivity that absolutely no player ever is going to rely on.

This is all the more unfortunate considering Mount Olympus shares the same navigational dilemma as its predecessors, with endless backtracking and constant back-and-forth shuffling through the most static array of lifeless imagery and boring ambience music yet. There’s nothing here to breathe fresh air into the familiar formula, the production offering nothing more than an unimaginative, uninspired experience. 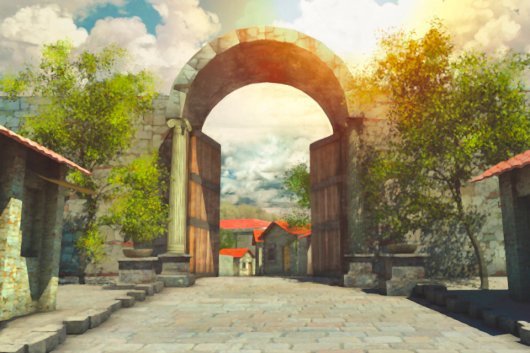 I can only assume that these developers are either relying too heavily on the same sorts of sourced game engines or are independently executing equally poor design shortcuts to oddly arrive at the same exact design flaws. Regardless of the reason, there is no excuse for this game’s lack of creative content or notable production values.

The story here is about as involved as I was playing this game. You play someone in a Greek or Roman society (neither of which is established) seeking out the gods who seem to have vanished. This brief sliver of narrative is swiftly explained by the singular recurring guard whose sole purpose is expositional. His first two lines communicate the idea of finding the missing gods, at which point the entire story has pretty much been developed as far as it’s ever going to go. By the guard’s third line, he has already started explaining what the floating icons are in your interface.

The gameplay is just as limited, comprised of a large maze of fetch quests involving a routine pattern of key finding, random matching and slider puzzles, and inventory combinations. These are layered across three main segments of exploration, each of which consist of a few screens that you’ll continuously cycle through until you finally unlock the main door to the next area. The journey begins in a tight street environment, which transitions to a lifeless and barely explorable city area before leading to an even more lonesome and uninhabited docking station, and then ultimately ending up at the final approach to Mt. Olympus (which doesn’t actually include any exploration or interactivity in itself). 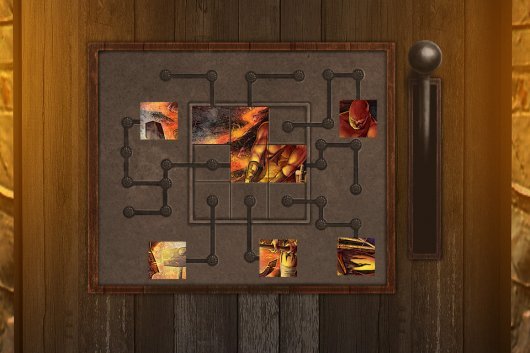 Each of these environments manages to be even more redundant and bland than the last due to the inanimate imagery and the designers’ refusal to ever leave their comfort zone. While some of the images are crisp and colorful, all of them have limited interactivity and not much of anything ever really happens. With a title like Mount Olympus you might expect some fantastical imagery, but instead this game mainly consists of figuring out how to traverse the empty streets of empty towns. You’ll reach the point where you’re tempted to speed your way through each new screen, by then expecting to find nothing of consequence on any of them, though of course this means you will end up skipping over the occasional randomly placed object along the way.

Like most casual games, the hint system is incredibly streamlined. Mount Olympus offers a special “ability” that when fully charged reveals the entire solution to item combinations and object locations by superimposing little successive circles over the exact places to touch, both on the image screen and the player interface. If you activate the hint when standing in a completed or empty screen, the circles guide you away from that screen to the nearest available unsolved puzzle, then continue to guide you the rest of the way through. There is a short wait period between hints until the system charges up again, but there is no restriction on the number of times this ability can be used.

Even more streamlined is that, during slightly more involved interactions, a second ability pops up that offers to execute the whole action for you. As endlessly repetitive as this game is, almost any interaction beyond using a key on a door is going to be a slider puzzle. However, if you choose to skip these sliders and just have the game solve them for you, you’ll miss the only real substance the game actually has to offer. 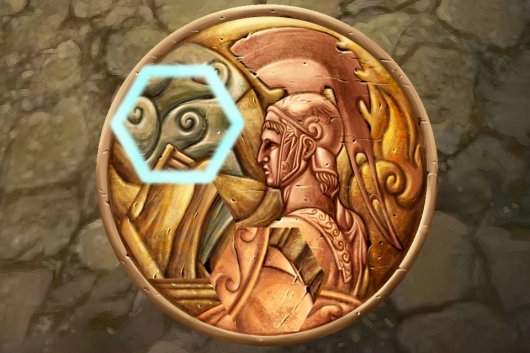 The way these slider puzzles work actually shifts rather drastically from puzzle to puzzle. Sometimes you’ll find yourself dragging tiles around and other times you’ll tap buttons to rotate them on a grid; still other times you’ll find yourself tapping on a tile that will highlight to switch out with another. The execution of these puzzles feels clean with the touch mechanics of an iOS device, and for a good minute or two you may actually feel engaged in the experience.

But slider puzzles are really as extensive as the experience goes, and it’s unfortunate that they represent the bulk of this 1-2 hour adventure. As a mobile game, Mount Olympus can be played in small doses at a time, but with this easy difficulty level it’d be a challenge to stretch the play time out very long. Sadly, even the payoff at the end is barely worth the effort, serving up one of the most lackluster and predictable endings imaginable.

I understand that this kind of inexpensive mobile adventure has its place in the casual consumer market. However, there’s really no excuse for being so devoid of creative ideas or ambition. Games this short, this shallow, and this repetitive lack even the desire to offer the kind of substantial gameplay that characterizes better adventures, or even the best casual games. If designers recognized the potential for so much more than merely clicking through screens and combining objects to unlock another puzzle or two, maybe we’d get more worthwhile mobile adventures. Until they do, titles like Mount Olympus should make like the gods and disappear.

Mount Olympus is a repetitive, lackluster, and simplistic experience barely masquerading as an original adventure.

GAME INFO Mount Olympus is an adventure game by Tyler Parsons with iCOOLgeeks released in 2014 for iPad and iPhone/iPod Touch. It has a Stylized art style, presented in Slideshow and is played in a First-Person perspective.

What our readers think of Mount Olympus