Review for The Walking Dead: 400 Days

We get a small commission from any books sold.
Written by
Reece Warrender — August 5, 2013

Like many gamers, I was left gasping at the emotionally-charged ending of Telltale's The Walking Dead, exhausted at having lived – and died – through the (few) highs and (many) lows of the zombie apocalypse and the tragic human desperation that followed. After giving us a brief chance to collect our breath again, Telltale has since released a downloadable expansion called 400 Days, designed to bridge the gap between the first five brilliant episodes and the upcoming second season. Its main focus is to introduce at least some members of the new cast and provide a brief snippet of their backstories. These scenarios are split across five short segments that span a 400 day period in the same general region, beginning right at the start of the outbreak. This episode marks a welcome return to the land of the undead, but given its shallower, rapid-fire structure (no pun intended) and short play time, it ultimately serves as little more than a teaser for what's to come than a rewarding adventure in its own right.

Once the episode loads, you’re presented with an information board outside of a gas station, along with a photo and name of each of the five characters pinned up. You’re able to select which segment to experience in any order, but your choices will influence the story development, as decisions made in each can result in slight differences in later scenarios. As you play, you may also notice subtle references to choices you made in Season 1, although these can be missed as easily as overlooking a corpse on the roadside.

As pleasing as it is to notice such connections, it’s clear that the meat of 400 Days is not on the past but the future. There's no Lee Everett, no Clementine or any of the other major stars of the original game. With a brand new cast, it's once again all about how your tough choices could significantly impact (at least part of) the next season. These choices can be small and straightforward, such as having the option to tell a lie and sway a decision, or be brash and potentially game-changing, such as deciding which of two characters has to die in order to ensure your own survival. 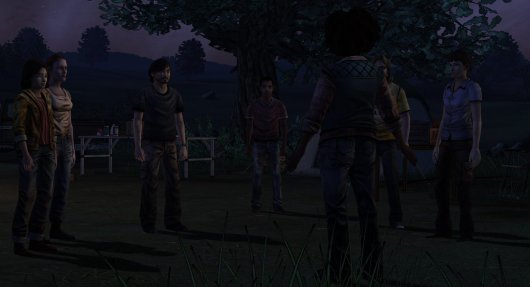 As before, the game focuses on dialogue and branching story progression over typical item-centric adventure puzzles or action-packed gameplay, although you’ll find a handful of minor obstacles that require things like finding keys in a dark car by carefully examining the environment, as well as deadly sequences in which you’ll need to click areas of attention within a time limit with your life on the line. The emphasis is undoubtedly on the characters and their dynamic interactions with one another, though, so for better or worse it's more of the same type of gameplay that you've come to expect of the series.

Between the five main characters, there’s a wide range of personalities and it won’t be long before you’ll have picked out your favourites – and perhaps more importantly, your least favourites – just as you did originally. There’s Vince, a convict on his way to prison; Wyatt, whom you join in the midst of trying to escape an aggressor; a hitchhiker named Russell, who grabs a ride with a peculiar stranger; Bonnie, a former addict stuck in an unfortunate domestic dispute; and Shel, who happens to be part of the cancer support group from last season's fourth episode, trying to care for her younger sister.

Although completely independent of one another at the start, each segment picks an eventful and defining moment in the characters' histories that will eventually conspire to bring them together. It’s just unfortunate that these moments are so fleeting, ending just as they start to get going. Of course, as a teaser for Season 2 that's their entire purpose, but whilst they certainly leave you anticipating more, they never quite satisfy. The curtain always closes just as you begin to get immersed, forcing you to start all over with someone completely new. 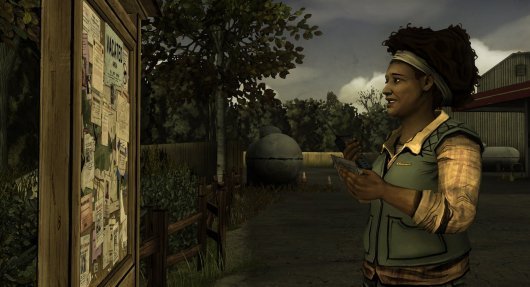 As a "special episode" for Season 1 (you're required to have at least the first episode installed to play 400 Days), the game runs on the same engine, warts and all. As I experienced with prior episodes, I once again encountered the familiar robotic animation and frequent load issues, coupled with unfortunate stuttering every time an action sequence began. This was most common during escape sequences, where the scene moves at a brisk pace – obviously the times in which you want the most responsive controls. One particular scene has Russell thrown a gun that you need to click to catch… it’s safe to say I missed this entirely and the gun slid embarrassingly away.

On the plus side, naturally the presentation itself is once again fantastic, with its distinctive graphic novel style and stellar voice acting throughout for all characters. The character models in particular are stylized in a way that instantly give you a firm sense of their personalities. Even the photos on the information board offer a personal glimpse into their private lives, whether showing a fond family moment or a standoffish hand gesture towards the camera with accompanying glare. 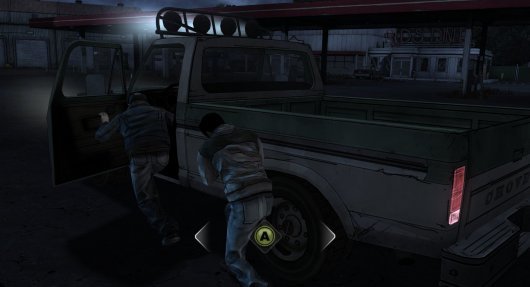 As your choices pile up, their potential significance becomes apparent as you spot characters from one segment bleed into others and you begin to put the pieces of the narrative puzzle together. More importantly, the finale suggests that your actions could have a direct result on who participates in Season 2 – or at least, in which role. How it will all play out is currently unknown, but Telltale has certainly dangled some pretty significant loose ends that I’m eagerly anticipating being tied up next season.

On its own, 400 Days feels a little underwhelming due to the extremely short and somewhat shallow nature of the 20-minute-per-character tableaux. At the same time, it certainly does its job in introducing you to disparate new characters and whetting the appetite for another full five episodes starring this ragtag crew. If you're looking for any additional closure on Season 1, you won't find it here. Instead, it's more a prelude to Season 2, and a brief one at that. If you already know you're in for the long haul, 400 Days can be viewed as an intriguing early glimpse into a greater story to come, and although it's less substantial and significant than the regular episodes that preceded it, it's still a worthwhile endeavor for diehard series fans.

The Walking Dead: 400 Days is available at:

The five single-character segments in 400 Days results in fleeting bouts of entertainment that are cut short too early and only tease at the prospect of something more substantial.

GAME INFO The Walking Dead: 400 Days is an adventure game by Telltale Games released in 2013 for iPad, iPhone, Mac, PC, PlayStation 3, PlayStation 4, Switch, Xbox 360 and Xbox One. It has a Stylized art style, presented in Realtime 3D and is played in a Third-Person perspective.