At E3, Frogwares promised the small group of videogame journalists that got a sneak peek at the newest installment in their Sherlock Holmes series, Crimes & Punishments, that the game will “make you believe that you are Sherlock Holmes.”

This seems to be quite a departure for the series, and Frogwares developer Olga Ryzhko emphasized several times during the demonstration how the design philosophy behind this seventh chapter in the long-running series is about giving the player a personalized experience. Unlike its predecessors, this game is intended to allow you to imagine your own interpretation of Sir Arthur Conan Doyle’s famous protagonist – easily the most famous celebrated detective in fiction.

It’s certainly refreshing to hear that Frogwares isn’t going to stick to the same formula which has proved successful through the previous entries in the series, but I can’t help but wonder how this will sound to adventure game fans eager for more of the traditional puzzle-solving detective gameplay of past titles like The Silver Earring, The Awakened, and Sherlock Holmes vs. Jack the Ripper.

The first thing any player will notice when playing Crimes & Punishments is that the game features perhaps the most dramatic technological improvements of any entry so far. Ditching the in-house graphics engine they used in The Testament of Sherlock Holmes for the Unreal Engine 3 (an engine common in first-person shooters), Frogwares has significantly raised the bar on the eye candy quotient. Not only did Holmes and his companions and adversaries look fantastic in the demonstration, Victorian-era London was also vividly brought to life on the HD screen.

As soon as the demo began, I was struck by how realistic the world looked. London was a gorgeous canvas of antiquity. Light reflected realistically off of store front windows, the shadows of moving hansom cabs played across the cobblestone roads, and the city felt alive with real people. In addition, Holmes himself has received a bit of a modern overhaul – it's clear that other modern interpretations of the Great Detective must be influencing Crimes & Punishments – and the realism of his movements and facial expressions was impressive.

It was difficult to not be impressed by an adventure that had more in common graphically with a triple AAA title like BioShock Infinite than an old-school point-and-click. “It’s a really big step forward for the studio,” said Ryzhko. “Why? We are changing the graphic quality for the game way more than we have before. Even if Testament was thought to be impressive, this is going to be even more beautiful.”

As with the last few Sherlock titles, you can play the game in either third-person perspective, seeing the adventure over his shoulder, or directly in the first-person. It will be very tempting (if you can handle the free-roaming 3D motion) to play in the first-person perspective, since the game is designed to be so personal. “Our intention with Crimes & Punishments is to make you really believe you are Sherlock Holmes, to step inside his shoes, and into his brain, and into his hat,” added Ryzhko. 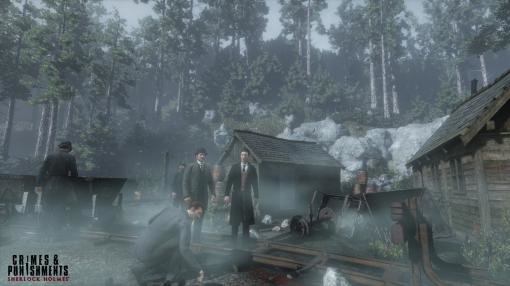 There’s a number of ways that the developers are attempting to do this. No matter whether you’re using the first- or third-person viewpoint, the game is absolutely played from Sherlock’s perspective. When you view a crime scene or interrogate a suspect at Scotland Yard, your biggest tool is being able to access Holmes’s legendary ability for esoteric deduction. Often the game enters what Frogwares referred to as “Sherlock Holmes Vision” – while time doesn't slow down, the story will suddenly pause to allow you to observe a number of clues about the person, object, or location you’re currently investigating.

Through Sherlock’s eyes (the perspective is always first-person when you get close and personal with an important clue), you might notice a telltale stain on a coat or that a shelf has a box-shaped area on it untouched by dust. This is shown by moving the cursor over the relevant spot, and being notified of a specific clue through text popping up on the screen. This was the first time where it seemed somewhat obvious – though Frogwares may be reluctant to admit it – that the success of the BBC’s re-imagining of Holmes may have had some influence on the series, but the addition of ubiquitous text popping up to identify clues is an interesting feature, though it will have to be played to see how well it works.

In addition to visual observation, Holmes can also uncover clues during his interrogations. Crimes & Punishments features a dialogue wheel reminiscent of Mass Effect, which allows you to choose between being either threatening and intimidating to a suspect or to play as the good cop (detective?). Information gleaned in these interactions will also be essential to completing the current case. The game is fully voiced, and again the production values of the characters on display in the first chapter were top-notch. The shouting voices in the busy street also added an immersive touch. 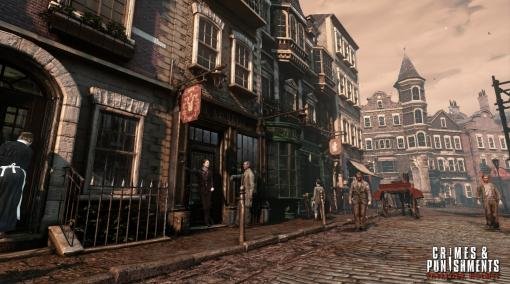 The second area where Crimes & Punishments allows the player to create their own experience is in what they do with the clues they uncover throughout their investigations. There are eight cases which need to be solved over the course of the game, and Frogwares estimates the total play time at around fifteen hours. Each investigation will offer its own specific crime and guilty party.

At the end of each investigation, the game opens up the “deduction board.” This board is where the player has an opportunity to put together the clues they, as Holmes, have uncovered during their investigations. “Depending on the way you interpret clues, you’ll come to different conclusions,” said Ryzhko. “On top of that there is also the moral choice, deciding who’s guilty, and what you want to do with this information.”

You can make your own decisions on what clues mean. This was only demonstrated briefly, but according to Frogwares, players have a chance to decide what they might think that stain reveals, or what was actually missing on the shelf. Once those clues are put together, you then make a choice on who you believe is guilty of this chapter’s crime – and whether you “absolve” or “condemn” the party. Absolution could mean letting the guilty party walk, while condemning them usually means passing on your accusation and evidence to Lestrade at Scotland Yard. I am personally curious to see what situation might warrant letting a criminal walk, but it’s an option at the close of every case. 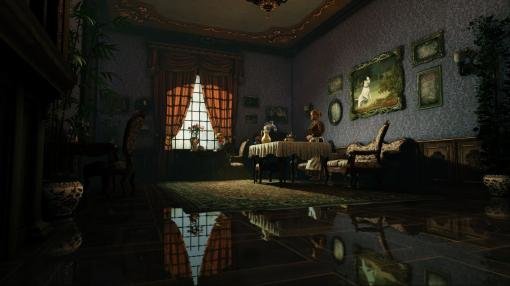 In the opening chapter, there were four different conclusions that Holmes could reach, and four different suspects that could potentially be accused. It is possible to make an incorrect choice and continue on to the next chapter. There is an actual guilty person in each story, but Frogwares said it would eventually become very obvious if incorrect conclusions had been reached, though they didn’t elaborate on how that would happen or whether there will be any potential consequences.

One of the casualties of this new approach is that traditional adventure puzzling isn’t as ubiquitous as in previous entries. Here the majority of puzzle-solving happens through the deduction board in sorting through the clues collected. Frogwares did show off a minigame (which could be skipped) based around picking a locked door during the demonstration. However, overall the  gameplay of Crimes & Punishments, like its graphics, seems to be taking a cue from other contemporary adventures like Heavy Rain and L.A. Noire in moving to a wider range of interactivity within the narrative rather than sticking with the classic inventory/logical riddles.

However, Frogwares did mention that despite the difference in gameplay elements, they consider the difficulty level of Crimes & Punishments to be not for the faint of heart. Searching for clues and then interpreting those clues correctly – even with the Great Detective’s help – promises to offer the greatest challenge of any  game in the Sherlock Holmes series.

Each of the eight investigations in Crimes & Punishments are – no surprise – part of a much wider criminal plot, and considering the wider choices now available to the player, there will be a maximum of ten different final endings to the game.

Crimes & Punishments is scheduled to be released on PC, PS3, Xbox 360, and “potentially next-gen consoles” in the first quarter of 2014. It was only a brief glimpse that I got at E3, but it was certainly a promising introduction. Sherlock Holmes has been re-introduced, re-imagined, and re-interpreted countless times since his initial debut in 1887, and the idea of allowing the player to create their own version of the archetypal sleuth is an intriguing premise indeed. We’ll just have to wait a little longer to see if Frogwares can truly make the new game afoot truly feel like our own.

Niclas
This game looks VERY promising. I am so looking forward to play it.
Advertisement
archived preview 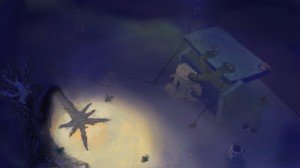