The Whispered World is one of those games I thought I'd never get to play. It's been knocking around in various incarnations for almost seven years--first as a school project by art student and adventure game enthusiast Marco Hüllen, then as a never-realized launch title from wannabe publisher Bad Brain Entertainment. In 2007, development started over when Hüllen partnered with a new publisher, Daedalic Entertainment, who at that point hadn't released any games. Then, after about a year and a half in production, the game finally released in August 2009... in German.

Eight long months later, the wait for the rest of us is practically over. Daedalic is on the verge of releasing an English localization, in partnership with Deep Silver in Europe and Viva Media in North America. While I still haven't had the pleasure of playing the game myself, I was fortunate to receive a lengthy demo at the recent Game Developer's Conference. So, has The Whispered World been worth the interminable wait? After seeing what I saw, I have to say yes.

This is a cartoon fantasy game that stars Sadwick, a clown who (as you might guess from his name) is kind of a downer. He's been leading an uninspiring existence as a member of a traveling circus troupe that includes his smug brother and perpetually confused grandfather, but all that is about to change. Unbeknownst to Sadwick, his world is being threatened by a destructive force that has gradually begun to reveal itself to him in dreams. Sadwick, as it turns out, is partially responsible for the problem, and to protect his world from destruction, he’s going to have to become part of the solution. 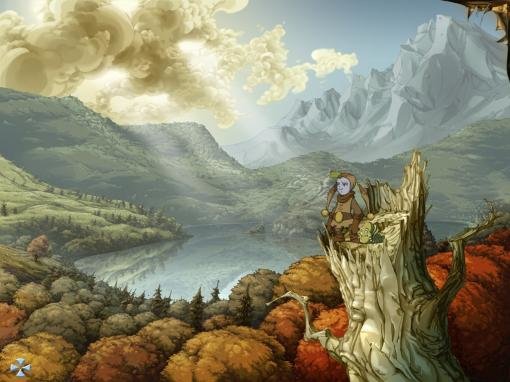 One reason this game has been eagerly anticipated for such a long time--and, admittedly, one reason I thought it would never see the light of day--is that it boasts a beautifully hand-drawn art style. The art is entirely in 2D, a fact of which Daedalic is very proud. They chose to go this route, rather than the more common 2.5D or 3D, out of a belief that adventure gamers miss the detailed hand-drawn worlds portrayed in classics like Broken Sword, Monkey Island, and Full Throttle--all of which were influences for The Whispered World itself.

It was a good decision. I haven't seen an adventure game that looks like this in a very long time. The striking background art gives Sadwick’s world a magical, enchanted feel. Ten animators worked on The Whispered World, and their work is apparent in the detailed character animations, as well as the ambient animations sprinkled throughout, such as smoke curling from a chimney and laundry blowing on a clothesline. Though the 2D perspective means many of the scenes are viewed from only one camera angle, the backgrounds are detailed enough that they give you plenty to look at. Plus, parallax scrolling is employed in many scenes, adding a sense of depth and dimension as Sadwick moves across the screen.

The mouse-driven controls are basic point-and-click. When you select a hotspot, a menu pops up with three options: look, use/take, and talk. Items Sadwick picks up are stored in his inventory for later use. Although Daedalic is catering to a traditional adventure game audience, they have included a few features that enhance the game's accessibility and prevent typical adventure game annoyances, including the ability to double-click to quickly exit a scene and to press the space bar to locate all hotspots in an area. There's also a map that allows Sadwick to easily move among locations.

Sadwick has a pet caterpillar named Spot who accompanies him on his adventure and can take on different shapes and sizes--an ability that reminds me of the sidekick in the old Sierra game Torin's Passage. For example, early in the game Sadwick must lead Spot to water that he can drink from; once this has happened, Spot is able to assume a round, bouncy shape reminiscent of a water balloon. Once Spot has learned a new form, you can select it at any time, which becomes useful for solving certain puzzles. 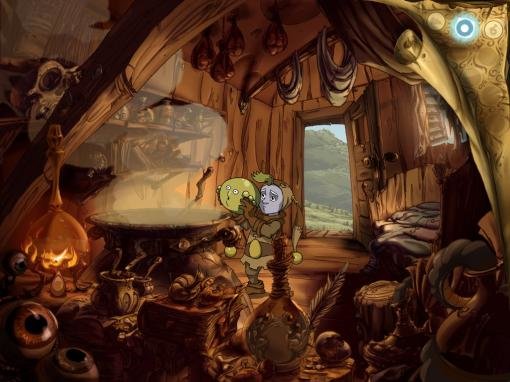 The gameplay appears to be fairly straightforward from an adventure game standpoint. During our forty-five minute demo, I saw several dialogue puzzles and inventory puzzles, as well as an example of Spot being used for a puzzle solution. Daedalic's PR manager Claas Paletta described more varied gameplay that occurs later on, mentioning minigames, mechanical puzzles, a slider, and even a chess puzzle. He also explained to me that the game's designers have paid a lot of attention to interactivity, trying to reward the player with unique lines of dialogue for any action you try, as opposed to a generic "that doesn't work."

I mainly saw the beginning of the game, with locations around a forest that included a clearing where the circus wagons were parked and a nearby lake. Claas told me that The Whispered World starts out fairly linear, with the first chapter designed to ease players into the game, but Sadwick gains more freedom as the game progresses. Though I didn't get to see it, I was told the second chapter takes place on an island in the middle of the lake, and Sadwick is free to move around the island and complete various puzzles in any order. Daedalic estimates about four hours of gameplay in each of the game's four chapters.

The English localization was prepared with assistance from veteran adventure game writer Steve Ince, and the voices were recorded in the UK. It was apparent during the demo that some of the jokes were difficult to translate--in particular, a conversation between Sadwick and his doddering grandfather that relied heavily on puns seemed a little awkward--so I'm anxious to check out the finished product to find out how the localization holds up.

Thankfully we won’t have to wait too much longer to find out: The Whispered World will release in Europe on April 23 and in North America on April 26, both at retail and as a digital download.