The Night of the Rabbit archived preview

German studio Daedalic Entertainment has carved out a special niche for themselves within the traditional adventure game niche. They’re one of the most prolific developers of good old point-and-clicks these days, and every time I meet with them at GDC their line-up has become more impressive. That might have something to do with the fact that they keep nabbing people who “get” adventure games—like Matthias Kempke, a big-time LucasArts fan who used to run The Essential Guide to Monkey Island.

One of the games on display this year was The Night of the Rabbit (originally announced under the title The Rabbit’s Apprentice), which will release simultaneously in English and German at the end of this month. Though the game was shown to me by Jan Müller-Michaelis (aka Poki, creator of Edna & Harvey and Deponia) it’s Kempke’s brainchild—after he got the company’s attention with 2010’s What Makes You Tick: A Stitch in Time, Daedalic decided they had to bring him on board. “The special thing about his games is that they’re quite free, quite open, you always have a large environment from the very beginning, with lots to explore,” Poki explained as the game loaded up. “In The Night of the Rabbit, you’re also able to get lost in this fantasy world.”

The Night of the Rabbit’s cryptic opening sequence appears to take place in the boughs of a large tree, where two shadowy figures are obscured by fog. One of them (a husky-voiced ghoul wearing a white mask) surmises that the other (a mute, anthropomorphic rabbit) is trying to find “the beginning of his story.” After a brief one-sided conversation, the ghoul sends the rabbit on his way with an ominous, “I hope he finds what he’s looking for.” The scene then shifts to a quaint country cottage at bedtime, where Mrs. Hazelnut is tucking in her son, Jerry. In a short cutscene punctuated with nostalgic music and rhyming verse—all very reminiscent of a children’s storybook—we learn that Jerry dreams every night of becoming a magician. This is clearly the “beginning” the rabbit was searching for, and even before anything has really happened, The Night of the Rabbit has set itself apart as a game with a very unique story to be discovered.

Though the interface will be very familiar to players of Daedalic games and point-and-click games in general, it has been tailored to The Night of the Rabbit in multiple ways. This becomes apparent in the next scene, when Jerry wakes up to realize that he has only two days left for adventure before the new school year starts. Like other recent Daedalic games, a brief tutorial introduces you to the one-click interface, use of the inventory, etc., but this has been neatly tucked into the environment outside Jerry’s house and can be skipped completely if you want. A hotspot finder and built-in hint system become available a little later, also cleverly integrated as magical skills Jerry picks up during his adventure.

As expected from Daedalic, the graphics are hand-drawn 2D with occasional cutscenes, and parallax scrolling has been used in some backgrounds to give an illusion of depth. In a company first, however, The Night of the Rabbit’s backgrounds bear the stamp of art director Simone Kesterton, who usually focuses on character designs for games like Deponia. In this case, Kempke completed the background layouts and line art himself, after which Kesterton colorized them with subdued shades that call to mind the painted artwork of many classic children’s books.

When asked which Daedalic game The Night of the Rabbit is most similar to, Müller-Michaelis answered The Whispered World in the respect of being a fairy tale, but he cautioned that Jerry is quiet and subdued—nothing like the (overly) enthusiastic Sadwick. Jerry and his mother speak with British accents, which adds to the picturesque, storybook feel. After picking a basket of blackberries so his mother can bake a pie (how quaint!), Jerry receives an odd letter by special delivery—literally, as the letter flies itself right into his mailbox. It contains a magic spell that conveniently requires ingredients lying around outside Jerry’s home and in the adjoining woods. Solving this multi-stepped inventory puzzle prompts the arrival of the Marquis de Hoto: a human-height white rabbit in a dapper suit who appears to be the same silent traveler we saw in silhouette a few scenes back. 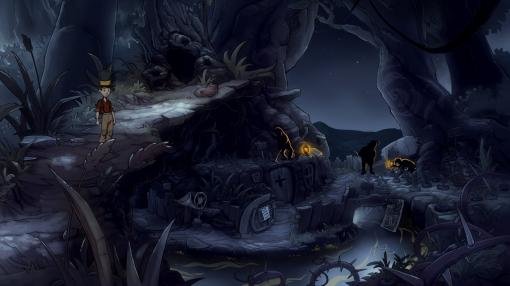 When I asked Poki what inspired this game, he brought up Alice in Wonderland: “Matthias was intrigued by the idea of, ‘What if the rabbit didn’t lure Alice by accident? What if he had a plan, had watched her, and chose her to follow him?’” This is apparently the case for The Night of the Rabbit’s Marquis, who offers to make Jerry his apprentice and teach him the ways of the Treerunners, who use a special type of magic to conjure up portals and travel between worlds. Learning this magic will take a very long time—days, even weeks—yet he promises Jerry will be home in time for dinner.

To become a Treerunner, Jerry has to find four portals and venture to the worlds beyond them. (At this point, Poki mentioned another, less obvious inspiration for the game: Doctor Who.) By way of demonstration, the Marquis leads the eager apprentice through a tree portal into Mousewood. A peaceful, Wind in the Willows-type place inhabited by mice, squirrels, and other little furry things, Mousewood has links to many other worlds and serves as a hub in The Night of the Rabbit, with Jerry returning there each time he picks up a new tidbit of magical knowledge in one of the adjoining realms. Poki explained that upon each return to Mousewood, Jerry will find the place somewhat changed by a lurking evil, until it soon becomes clear that he has to hurry up and finish his magical training so he can deal with the threat.

My demo included several inventory puzzles. In one, Jerry manages to pocket something he’ll need later by swapping an item in the environment with another from his inventory when an NPC isn’t looking. Another puzzle involved stopping a leprechaun who zips from room to room by paying attention to his habits and setting a trap. As usual in Daedalic games, certain inventory items can be combined for puzzle solving. Other types of puzzles involve the magical skills Jerry picks up in the course of his apprenticeship, such as the ability to make time pass quickly to trigger a shift from day to night—every location has a separate daytime state and nighttime state, and some areas must be manipulated during the day to solve a puzzle at night, or vice versa. Another obtained ability is the Rock Whisperers spell, which allows Jerry to converse with the many talkative stones around Mousewood. Though you’ll ultimately need to do this at some point to solve a puzzle, Müller-Michaelis promised there are many optional rock conversations waiting to be had as well. 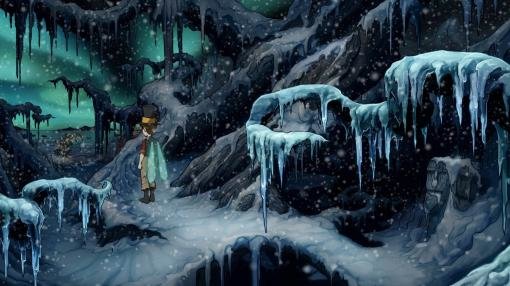 In fact, The Night the Rabbit seems to provide a lot of optional content for players to explore. You can engage Mousewood’s inhabitants in friendly games of cards, and find the 32 dewdrops scattered around the world to reveal a picture of the Marquis’s former apprentice. (You don’t need to know who this was, Poki said, but finding out will give you a new perspective on the story.) There are also eight unlockable audio clips hidden in the game that tell background stories about the inhabitants of Mousewood. Such optional content is meant to help players lose themselves in this fantastic storybook world.

Though its protagonist is a child, The Night of the Rabbit is clearly a game that can be enjoyed by all ages. It strikes me as a cross between the 1995 Sierra game Torin’s Passage and The Chronicles of Narnia with a bit of Harry Potter thrown in, and like all of those, The Night of the Rabbit is probably an experience that kids and parents can enjoy together. I asked Müller-Michaelis if he thought children could play it alone and he said yes, but based on what I saw the gameplay is not at all dumbed down—it certainly seems to be aimed at the same audience as any other Daedalic adventure. We’ll know for sure very soon, as the game is scheduled to release on May 29.

KEEP ME UP TO DATE ON Night of the Rabbit,The Subscribe to our newsletter and we'll keep you up to date!