continue reading below
» Home / Articles / Reviews / Dominique Pamplemousse in “It’s All Over Once the Fat Lady Sings!” review

Review for Dominique Pamplemousse in “It’s All Over Once the Fat Lady Sings!”

Dominique Pamplemousse in “It’s All Over Once the Fat Lady Sings!”  (2013)

As much as I’d like to call Dominique Pamplemousse in "It’s All Over Once the Fat Lady Sings!" the Citizen Kane of androgynous private detective, film-noir claymation game operas, that would be turning what’s actually a rather charming adventure experiment into an easy punch line. Even if it is a pretty good punch line.

Written, designed, and sculpted by Deirdra Kiai, Dominique Pamplemousse may well be one the most unusual adventure games you play this year. The product of Deirdra’s successful Indiegogo campaign – which netted $9,950 (on a $9,500 appeal) – the game is as modest as its funding, but offers plenty of surprises and originality. It’s not a particularly ambitious adventure: the game length isn’t much longer than a couple hours, the plot twists are standard genre fare, and the puzzles are so simple that they barely even slow the narrative. Yet despite the game’s obvious eccentricities – or perhaps because of them – the experience offers unique charm and wit.

Dominique Pamplemousse is entirely in black and white – in a 4:3 format box on your widescreen monitor that would be perfect if you’re still playing games on your dad’s Zenith – and all the characters and sets are molded out of clay and cardboard. The sculpted characters have more in common with Gumby than The Neverhood, but this only reinforces the game’s independent spirit and personal vision. The character animations are somewhat disappointing in their limited actions, however – people stiffly walk from one area to another and are limited to moving their arms or turning heads while delivering lengthy lines or songs. The sets resemble surreal dollhouses, from Dominique’s crumbling office with peeling construction paper as wallpaper to a deserted a cabin in the woods with a clay moose head and corrugated walls. 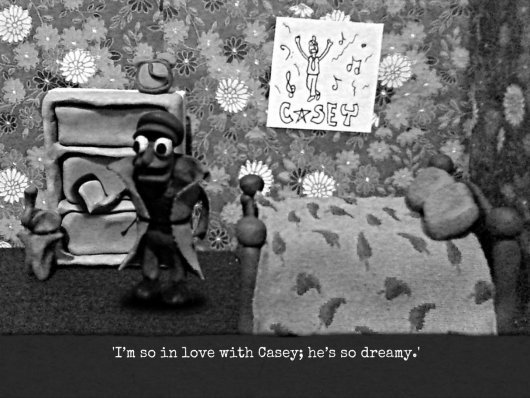 You play the titular Dominique, a gender non-specific detective behind on the rent for his or her shabby flat, who must solve the disappearance of Casey Byngham, pop star and teen idol.  During the course of your misadventure, the most important dialogue, plot points and twists, and character expositions are sung – that’s right, the game is an actual musical. As soon as the game begins, you know you’re not in Kansas. Or even the kingdom of Daventry. But it turns out to be an inspired choice. Kiai provides all the voice work herself and her performance is delightfully absurd, providing falsetto and baritones when necessary, and singing each character in their own tone and rhythm.

It’s hard not to find the whimsical nature of the game amusing – from the childishly claymation-imagined pop poster for Casey to the deus ex machina appearance of an “Agatha Lansbury.” The plot itself plays out like a soap opera, but it offers characters and relationships that Deirdra examines in a playfully wry manner. Each actor plays a central role and either reinforces or challenges both expectation and type. There’s Dominique, the everyman/woman main character, the record mogul villainess with a sweet daughter desperate to escape her mother’s megalomaniacal yoke, the raspy-voiced police detective and finally Casey himself, who makes only a brief but very meaningful cameo.

Each of these caricatures is designed to either represent a stereotype or to subtly break it – is Devon Van Bunng really the ditzy child she seems? Is the senile old lady watering the plants something else – and what happened to Casey’s lawyer? Dominique is played both for type as an inquisitive private dick and against – a genderless Marlowe who once studied advanced robotics. He or she is an enigma while you play and will remain so after the credits roll, though as you venture deeper into the game’s mystery, Dominique will become more personally involved in the plot until s/he’s forced to make a serious decision about the future. I expected there to be a little more examination of a sociological theme regarding Dominique’s lack of a defined gender. But maybe that’s the point – it’s not supposed to be a big deal. 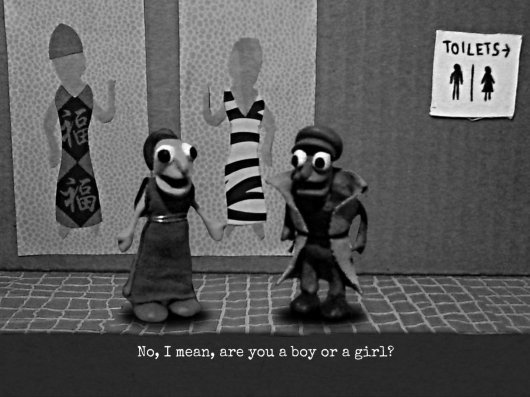 The protagonist slowly uncovers the relationships between the cast by exhausting most of the dialogue options and piecing together the truth with the help of a little backtracking between each clay player on the stage. The Flash-based point-and-click interface is sparse; you can’t move Dominique around the screen but merely determine the next object to examine or the next question to ask. There aren’t many diversions beyond the main storyline, and while Dominique cracks wise about a few items, the sets are too sparse to offer much non-essential commentary.

You can count the game’s actual puzzles on one hand, and Dominique is happy to provide a clue if you seem stuck. Nearly all of the puzzles are revealed through dialogue, as new information is revealed which then opens new methods of investigation with another. Technically you have an inventory, but if you have the necessary item, clicking on the right object in the world will use it automatically.

It all adds up to an absurd little “Days of our Claymation Lives” episode, never taking itself seriously and leaving it up to the player to find meaning and subtext in its melodrama. The fact that the characters sing their lines, that there's an appropriately absurd brass polka backdrop for the songs, and that Kiai is so intimately involved with each character, from physically sculpting them to providing each voice, makes Dominique Pamplemousse an invitation to experience one person’s meandering, delightful daydream. The singing, the sets, the voice acting are all unpolished; in fact, they seem to be consciously unrefined. This doesn’t hurt the experience, however, instead creating a world which strays from easy interpretation and is inevitably messier, more confusing, and ultimately much more personal and compelling than most conventional narratives. 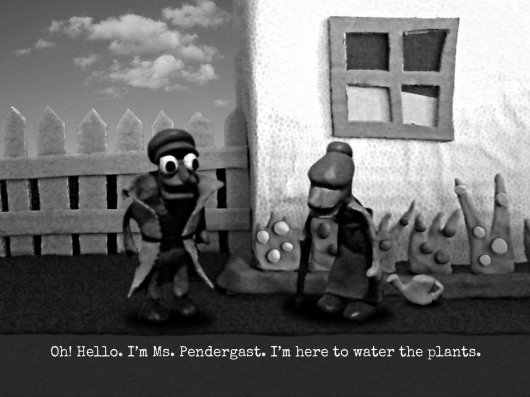 Dominique Pamplemousse may not be your thing – as a comedic romp, it’s not full of belly laughs, but features moments of inspired silliness. It’s certainly not a political manifesto masquerading as an adventure game, but the characters you’ll sympathize with seem designed to challenge expectation and prejudice. And while it absolutely uses familiar adventure tropes, the gameplay is too light for a puzzle enthusiast. It is also little more than a couple hours of diversion, and while the music is fun, you certainly won’t be humming any truly memorable melodies. That being said, there’s a good time to be had here, and an opportunity to marvel at the fun execution, ingenuity, and charm of such an unusual game's direction.

While I wouldn’t recommend this game to everyone, and especially anyone too cynical to take musical claymation figures seriously (or perhaps unseriously), I would recommend it to anyone interested in seeing how gaming as a medium is unique in its ability to challenge conventions, genre and perspective through simple play. Available for PC and Mac from the developer's website or iPad at the App Store, Dominique Pamplemousse in "It’s All Over Once the Fat Lady Sings!" may be a momentary lapse of gaming reason, but it reveals much about what’s possible when we’re ready to color a little outside of the lines.

WHERE CAN I DOWNLOAD Dominique Pamplemousse in “It’s All Over Once the Fat Lady Sings!”

Dominique Pamplemousse in “It’s All Over Once the Fat Lady Sings!” is available at:

Indie entries like Deirdra Kiai’s Dominique Pamplemousse are welcome in a genre where innovation is rare. However, a short and easy noir adventure with claymation characters singing their lines will certainly not be for everyone.

GAME INFO Dominique Pamplemousse in “It’s All Over Once the Fat Lady Sings!” is an adventure game by Deirdra Kiai Productions released in 2013 for iPad, Mac and PC. It has a Claymation style, presented in 2D or 2.5D and is played in a Third-Person perspective.

What our readers think of Dominique Pamplemousse in “It’s All Over Once the Fat Lady Sings!”

Interesting story, with many layers

Was a bit skeptical at first, but after talking to 2 characters I was really engaged in the story of this little musical adventure. Love the correlation between the subject matter of the story and... Read the review »