Cologne in the summer...

It sounds like the start of a great adventure, and it was, mostly. I've been visiting German videogame fairs since 2005: first the Games Convention in Leipzig and the past few years the gamescom in Cologne. The former was a relatively cosy affair where developers and publishers were excited to show their new upcoming titles to the general public as well as press. The booths were small and accessible, and even when things weren't always well organized (most of the presentations were in German, for instance, with no-one around to provide an English translation), the fair still made you feel welcome. The convention halls offered little room for growth, however, and the premises were somewhat hard to reach for international visitors. So after a few years, a rival fair was held at the Koelnmesse in Cologne on the same date, and since all the big publishers were present at the new one, the Games Convention soon ceased to exist. 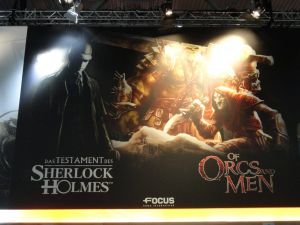 Now that I've seen three gamescoms, it hard not to think back with some nostalgia. In each consecutive year, the booths at gamescom have become larger and louder, and the public halls less and less attractive. Most 'big' title games are shown only in large, closed booths with endless queues snaking around them. Waiting 4 to 6 hours to play a game for a few minutes (or sometimes just to see a trailer!) is no exception, and filling the gaps between the large booths are payment providers and cell phone accessory producers competing for your attention everywhere. This year, only three adventure games were playable, Jack Keane 2, Secret Files 3 and The Testament of Sherlock Holmes. The latter shared a booth with a popular Orc-fighting game, which meant standing in line for a long time even when the PS3s the Sherlock game ran on were unused.

The business area was a whole lot better, fortunately, although here too the effects of the organizers wanting to occupy every spare inch were visible. There were booths that only marginally had anything to do with games taking up a lot of space, and the list of exhibitors at the official gamescom site was not very helpful. It took a lot of careful planning and studying developers' websites, blogs and twitter accounts, but in the end I had twenty appointments secured for three days, both for previously unannounced games and current games in production.

Wednesday, the only day the fair is open only to trade and press, started off with KING Art showing a few scenes from their upcoming game The Raven, followed by a nice chat with Steve Ince, who talked a bit about some games he has been working on recently and about crowd funding. Anders Gustafsson and Erik Zaring from Cockroach Games were up next, ready to talk about the fun they're having with the development of the Dream Machine claymation series. Studio Fizbin signed a contract with publisher Headup Games just before the gamescom, and were eager to show off the latest build of The Inner World. A fascinating concept was explained by Djamil Kemal from Lexis Numérique, who in cooperation with telecom provider Orange are developing a multimedia mystery experience, Alt-Minds. Revolution's Charles Cecil showed me a video about an upcoming game that will be announced very soon but must remain a secret until then. All I can say is that I was so impressed with it and so excited about the project that it is very hard to keep silent. The final appointment of the day was with Private Moon, who have several games relating to their AGON franchise in production, all more or less connected with each other by story, protagonist or theme. As Wednesday is by far the quietest day in the public halls, I also took the opportunity to try out a few RPGs and strategy games as well as the three playable adventures. 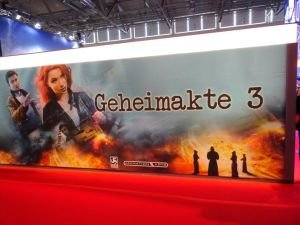 On Thursday, an Animation Arts presentation showed how working with a professional film production team led to some scenes from Secret Files 3 being rewritten and puzzles being cut or changed. Senscape's Agustín Cordes and Pablo Forsolloza led me through the playable Asylum teaser, and after I'd calmed down a bit we talked about the game's current state of progress. Jack Keane 2 then managed to brighten my mood some more with its lighthearted humour. At the Daedalic booth I was greeted by Edna & Harvey, who took me to Jan Müller-Michaelis for some information on Deponia 2, followed by Matthias Kempke showing The Rabbit's Apprentice, before finally sitting down with Gene Mocsy for a mission briefing on 1954: Alcatraz. Magnifying glass (figuratively) in hand, I then headed to the Focus Home booth to learn some interesting facts about The Testament of Sherlock Holmes. Claas Wolter from Lace Mamba Global later showed me what had been improved since the last time I saw the demonic Lucius. The indie Turkish team behind the first-person mystery Laranzuh was eager to show some of the locations from their game, as they have almost finished shooting and are ready to start scripting. At the end of the day, I sat down with Alberto Venditti and Leonora Bottini to talk about the inspirations for Nando's World.

On Friday, Iceberg Interactive reassured me that Bracken Tor is still in development, and they also have two Jonathan Boakes games lined up, though unfortunately there is still no definite release date for any of these. The German version of Mad Orange's Face Noir has just been released, and I sat down with the Italians to have a look at their jazzy detective game. After seeing Polish indie developer Nitreal Games's lineup (the sequel to their freeware conspiracy-themed adventure Mission Bielany is currently being translated into English), Igor Hardy told me about the five games available in the Summerbatch bundle and his own debut commercial game, The Thought Saved for Last.

Traditionally, German site Adventure-Treff organises a party following the fair on Friday, where many developers, publishers and of course fans meet, have a drink and discuss anything they like in a relaxed atmosphere. Since the beach bar from last year had closed down, the event was held at a different beach bar from the same owners this year. Things didn't go quite as planned, with the venue staff unwilling to switch on some lights and the toilets running out of paper and water after a few hours, but even that didn't spoil the good vibe at the party. Most of the people I met with during the convention were there, including Steve Ince, Agustín and Pablo, the teams from Animation Arts, Mad Orange, NHiM, Laranzuh and Daedalic. Even Edna showed up (I don't think she set fire to anything). Headup Games, who will be publishing the German version of Lilly Looking Through, had invited Geeta Games's Steve and Jessica Hoogendyk, who brought Lilly's iconic goggles and showed them around. CBE's Jan Kavan and composer Daniel Pharos were there, and though he's no longer making adventure games, House of Tales co-founder Martin Ganteföhr is traditionally at the party, and this year was no exception.

It has become a party tradition to have a little speech, this year about Adventure-Treff's official status as a club, and publishers always bring some freebies such as soundtracks from games. There's also an opportunity or two to get manuals or boxes signed, although due to the darkness I couldn't find many of the developers I wanted to ask to sign mine. A pity, because Gene Mocsy was excited enough about his first time being asked to sign something that he tweeted about it afterwards. I could have doubled his excitement! The party lasted a good seven hours all told, and it was an excellent way to conclude a busy week, for one night at least allowing me to forget all about the work still ahead, writing so many previews for all the games I saw.  But now that I'm home that task is at hand, so stay tuned in the coming weeks for more detailed information about every game on display at gamescom 2012.

Before that, however, turn the page for additional photos from Cologne. (All photos by Astrid Beulink and Ingmar Böke except the first two of the Koelnmesse. Click images for larger versions.)

It's the calm before the storm, as the Koelnmesse awaits the onslaught of a quarter of a million gamers.

Go To Hell Dave
Sounds good, We may try and go to the next one

charmed23
sounds so much fun! Im so glad the adventure community is still lively

Martin Gantefoehr
Let me put it this way: I'm not involved in making adventure games at current. However, I haven't made any New Year's resolutions about quitting them for the rest of my life. (That didn't work with quitting smoking, either.)

PolloDiablo
Gray Pierce, House of Tales got bought up by a publisher, and the team was incorporated & had to work on whatever type of game the publisher thought profitable. I believe Martin (and co-founder Tobias) were just hugely disappointed with not having as much influence on their own games as they wanted.

gray pierce
This is great stuff! Can't wait for all the upcoming previews! Just one question: why isn't Martin Ganteföhr making AGs anymore? Cause imo he was quite brilliant at it.

Kasper F. Nielsen
Sounds awesome, can't wait for the reveal of Revolution Softwares new game - let's hope it's a new Broken Sword in the style of the first two ignoring the existence of the last two!
Advertisement
feature