The developers at Cranberry Production obviously wanted a break from the dreary rain and fog of Willow Creek after being (virtually) immersed in the gloomy, oppressive English countryside for the last two Black Mirror adventures. And so they spread their wings (somewhat literally) for the clear, sunny skies of 16th century Spain and Egypt for their latest offering, Lost Chronicles of Zerzura. Of course, this being Cranberry, they still managed to find plenty of dark themes in these otherwise fairweather backdrops, including murder, slavery, kidnapping, and torture by pirates, thieves, and the worst offender of all, the Spanish Inquisition. But we wouldn’t have it any other way, especially when the results are so impressive. I recently had the chance to play through a significant portion of the German studio’s upcoming adventure, and I can already say without a shadow of a doubt that if you liked what you saw in Black Mirror 2 and 3, you’ll love what you find in the search for Zerzura.

A morbid tone is established right from the sketch-based opening cinematic, as a young mother is forced to smuggle her newborn son away from danger before soldiers burst in and burn her at the stake for reasons unknown. Twenty years later, two young brothers named Feodor and Ramon are preparing to launch their experimental new “flying machine” in the hills outside of Barcelona, far away from the prying eyes of the Inquisition. The test flight is a resounding failure, leaving Feodor to pick up the pieces and invent a new contraption while the curiously white-haired Ramon continues to pursue his inexplicable fascination with all-things-Egyptian. But before long the Inquisition discovers them at last, hauling Ramon away in chains. Determined to save his brother, Feodor’s latest invention is put to the test in a critical way as he begins a dogged pursuit through the skies and across both ocean and land to the desert city of Tripoli. 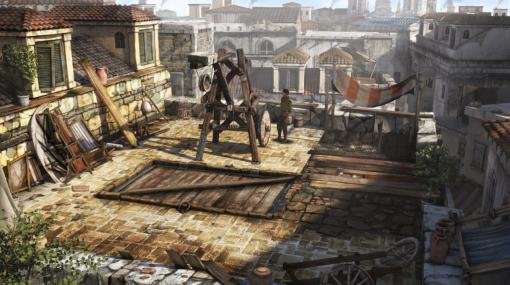 The story gets much more involved as you get nearer to your goal, and eventually you’ll discover the reason behind your brother’s capture and what it has to do with the legendary city of Zerzura. But for much of the game the premise is simply securing passage by any means available to continue following in his wake, and it’s a fun, adventurous journey with several stops (and crises) along the way. You’ll build a hot air balloon, crash land on a decrepit church spire, escape a sinking galleon littered with slaughtered crew carnage, earn the favour of rogue corsair captains, outwit Inquisitor guards, commit a monastery heist, and even perform menial slave labour (dung cleaning, woo hoo!). And you may just begin to get a bit chummy with an attractive but grieving young lady named Jamila, though it’s vengeance that motivates her willingness to accompany you for much of your trip.

Aside from the story details, you can pretty much take everything you know about Black Mirror and apply it to Zerzura. The point-and-click interface works the same, with hotspots disappearing once exhausted – a thoroughly helpful feature since some scenes have a great many interactive items at first. Some needed objects can be very difficult to see in the detailed backgrounds, making the hotspot highlighter another welcome option. It’s important to click every hotspot and examine every inventory item once acquired, as sometimes the game won’t register certain triggers until you do, even if you intuit the correct conclusion on your own. Feodor will run to any distant target clicked, though any minor obstacle causes him to slow to a overly-leisurely walk to bypass, while double-clicking exits transitions to the next scene automatically, and a quick travel map is introduced when moving between distant locations. Dialogues are simple matters of clicking all conversation icons. 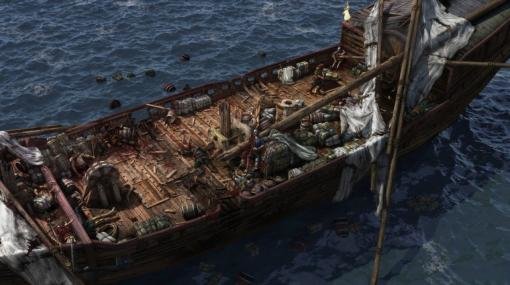 One of my favourite interface features is the smart cursor that shows which item combinations are valid, saving you the painful repetition of “that doesn’t work” responses for incorrect attempts. The combinations don’t always work, but the most logical ones at least offer some feedback for why they don’t. Some objects must be used in their own environment, becoming an active cursor when picked up instead of inventory, but even these are used the same otherwise. Overall this is about as clean and user-friendly an interface as you could want, with a journal keeping track of significant updates, and even tutorial tool tips available if so desired. There’s also a puzzle skip option available for the game’s handful of logic puzzles, though none I encountered were so hard I felt compelled to use it.

The Black Mirror games were consistently gorgeous, and thankfully that quality has carried over as well. Many of the environments in Lost Chronicles of Zerzura are stunning, from the lush green Catalonian hillsides to a beachside pirate hideout near Malta to sand-swept ruins in the arid desert. There’s a tendency to rely a little too much on long-distance shots, which shows off the scrolling backdrops nicely and allows for a practical plethora of interaction on any one screen, but it does result in feeling a little detached from the action at times. Character models are diverse and nicely designed but never shown close up, while animations are given rather short shrift. There are some nice effects like ocean waves crashing into the base of a cliff, but there are also cuts to black and “magical” item manipulation filling in a lot of visual blanks. Surely this is a budget limitation, and it’s hardly a deal-breaker, but I’d really love to see what these artists are capable of without such restrictions. 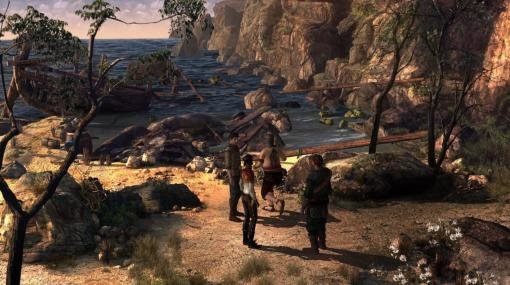 Sound effects represent another mixed bag. There’s a nice range of ambient and interactive noises, but the same clumping footfall over every terrain takes some of the lustre off, and many effects are a little overdone. The music is pleasant with some delightful Spanish guitar pieces, but it’s surprisingly sparse, and I didn’t notice a stylistic shift when events move to Africa, which would have been appropriate. The voicework all sounds great! The only problem: it’s all in German for now, so I can’t comment on the localization efforts. The subtitles are a little rough around the edges at this point, but even in the preview version, nothing serious was lost in translation.

Gameplay is almost entirely inventory-based, though there are a few clever variations from the norm. One involves collecting “ideas” for a flying machine and then assembling them in a functional order, while a couple fun ones involve map-making to target coordinates. You can usually pick up any item that isn’t nailed down, and as an inventor you can often combine items with no knowledge of what they’ll accomplish, but occasionally the game will trip you up by insisting that Feodor “knows” something you’ve already guessed yourself. These are really the only times I ever hit a snag, as Zerzura seems a fairly easy game for the most part, and you can brute force your way through a few of the tougher ones. Even a complex math-based puzzle is essentially solved for you once you’ve collected all the clues. But don’t think you’ll breeze through this game, as there’s just so much to do and see in each area (some confined to single screens, some spread out over four or five per location) that you’ll have your hands full throughout. 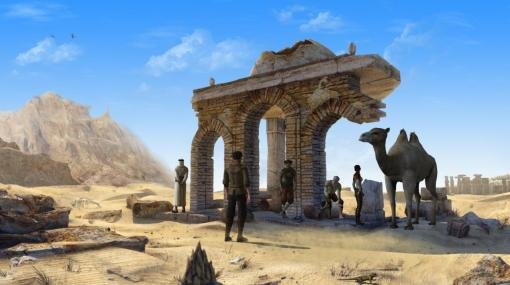 And really that’s the bottom line when it comes to this game: it’s eminently playable. Game time isn’t padded by getting repeatedly stuck, but rather a constant stream of tasks that take a while to piece together before finally resolving without too much frustration. It’s all very traditional, from the interface to inventory emphasis to the story about a hidden mythical city and a ruthless enemy trying to find it first, but because it’s packaged in such a slick, pretty presentation with solid gameplay and exotic locations behind it, the formula continues to work as well as ever. I’ve put quite a few hours into the game already and never once felt short-changed on entertainment. And having paused just long enough to write this preview after finally reaching the gates of Zerzura for the first time (or did I?), I’m heading back next to finish the subtitled game in its entirety, not because I have to, but because I truly want to. The rest of you have to wait a little while longer, I’m afraid, but sit tight for now, because Lost Chronicles of Zerzura is set to take off sometime in the second quarter of 2012, and you don’t want to miss the launch.

KEEP ME UP TO DATE ON Lost Chronicles of Zerzura Subscribe to our newsletter and we'll keep you up to date!