Doctor Who: The Adventure Games - Episode Five: The Gunpowder Plot  (2011) 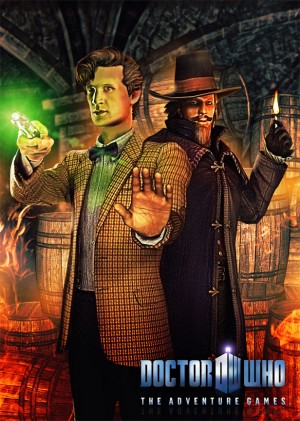 It’s been nearly a year since the last of four episodic Doctor Who adventure games based on the popular UK television show about a strange man who time-travels in his flying blue box. Developed by Sumo Digital in cooperation with the BBC, the initial episodes were generally middling in quality, never reaching the heights of their TV counterparts. It comes as a pleasant surprise, then, that the development team seem to have learned from their previous mistakes (albeit not all of them) and that the latest instalment, The Gunpowder Plot, is actually pretty decent. Its interesting storyline is grounded in real history and supported with a wealthy cast of characters, and a number of improvements to the gameplay have been made this time as well.

It’s worth pointing out from the start that this game is really only for fans of Doctor Who. Those who have never watched the show before may find themselves slightly lost sometimes, such as why, without explanation, the character of Rory is now flying in the TARDIS with the Doctor and Amy. Those who watch the show will know Rory is Amy’s husband, but it’s never properly addressed in the game. He’s a welcome addition though, since his humour works well on TV and it’s mimicked successfully here. If you don’t even have a slight interest in the show, however, there’s likely not enough here to win you over, since the other elements aren’t strong enough on their own to make it fully enjoyable.

The Doctor once again manages to get himself into a bit of a pickle when the TARDIS collides with an alien ship and creates a dimensional lesion, essentially linking two different parts of space together. Upon landing, the Doctor and his two companions soon realise that they have arrived in seventeenth century London at the time of the Gunpowder Plot, in which a group of Catholic rebels attempted to assassinate the King of England in 1605. The plan was to blow up Parliament, though they were caught before they could detonate the explosives. However, this fifth of November is not as history remembered due to the presence of one enigmatic Lady Winters. A bit of digging uncovers that this woman actually belongs to an alien race called the Rutans. It seems her ship crashed under the Houses of Parliament, and she plans to use the upcoming explosion to power the ship and gain access to a doomsday weapon that could end a war with the Rutans’ biggest enemies, the Sontarans. 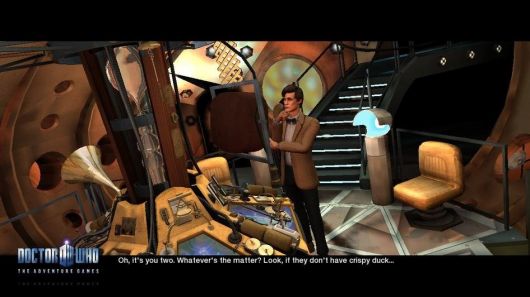 This is the largest Doctor Who episode in nearly every aspect. The plot has many different threads that see you often switching between the three main characters, whether you’re assisting Guy Fawkes and his rebel cronies, breaking into alien ships or simply exploring the streets of London. Your aim at first seems to simply be closing the accidental lesions that keep opening, but as the game progresses many different details come to light that build intrigue. How are you going to stop a war from breaking out? What about Fawkes blowing up Parliament? The fact that the story is grounded in history yet combined with fictional sci-fi elements makes it a pretty interesting tale.

The Gunpowder Plot also has quite a lot of variety on offer in terms of gameplay. All previous elements are present – minigames, stealth and exploration – but they are well balanced here, and the adventuring segments are more prominent this time round. There’s even a brief action section which sees you running to escape rubble falling on you, but adventure purists shouldn’t worry since it’s more of an interactive cutscene than it is a challenge. The lone minigame appears a few times, which has you linking shapes together in a certain order. It’s quite fun, and it’s a relief that the minigames don’t overwhelm proceedings as they did in the past.

The inventory now allows the ability to combine items, though it never gets very tricky. In fact, nothing ever really does. Whenever you need to use an item on an environmental hotspot, the solution is usually pretty obvious since there aren’t that many objects you can pick up (plus the one you need is nearby most of the time) and there are no optional hotspots to distract you. This does remove a bit of the challenge, which is unfortunate since the stealth parts seemed to have been toned down in difficulty as well, as it’s often obvious when you should be running or hiding. The puzzles themselves are standard fare, like retrieving objects in order to convince the plotters to let you join the crew, using items to pick locks or scouting out a certain flower. 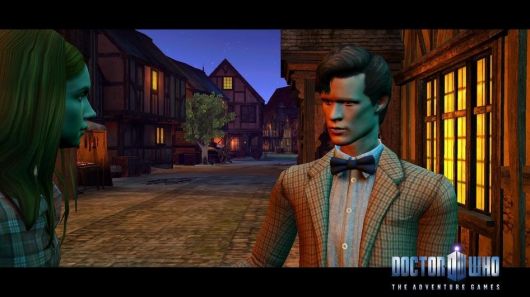 The seventeenth century characters all feature dialogue that is appropriate to the era, and the Doctor Who trademark wit is still intact, with the main trio often engaging in amusing banter with one another. There’s quite a large cast of people that you can interact with, and for the first time in the series, the world is populated with people purely there to breathe life into the environment rather than serving solely as plot devices. Whether it is Guy Fawkes himself or a local child, everyone you bump into is uniquely designed and relatively well defined as a character, which is a step up from the largely generic cast encountered in previous episodes.

However, despite these enhancements,The Gunpowder Plot is not without some damaging issues. A past problem still remains in that the voice acting isn’t as great as it could be overall. Matt Smith, Karen Gillan and Arthur Darvill all perform their roles as the Doctor, Amy and Rory quite well, but some of the secondary characters don’t always provide enough emotion to give their dialogue much spark. It’s serviceable, and certainly not awful, but there’s clearly room for improvement. There is also a problem with the cutscenes, which are all very badly directed. Sometimes the camera is in a completely inappropriate position, while other times it’ll cut between different scenes with confusing speed. Match this with the occasional shoddy, clunky animation and the cutscenes in general just come across as so unpolished that they take you out of the moment.

There doesn’t seem to have been any improvements to the technical quality of the graphics, but none was particularly needed. You’ll visit the TARDIS’s drawing room once again (updated with some new items to browse on the shelves), plus venture out into the city of London, underground sewers and of course the Houses of Parliament. Although there’s never anything to do outside of the primary task at hand, it’s quite cool just to be able to wander around a small part of historical London, through the streets and under the bridge. 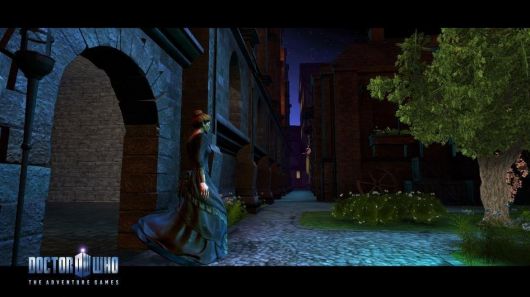 This backdrop is lit pretty well too, since the story is set at dusk, allowing for some atmospheric shadows and golden glows emitting from inside building windows. The sewers and alien tunnels are washed in greens, which gives them an eerie atmosphere. The biggest gripe to be had is with Rory’s face – his wide eyes especially – which makes him look less human, more extra-terrestrial. The music, meanwhile, is once again in top form, evoking all the right emotions: uncertainty through mellow strings when following someone’s footsteps or tension through fast-paced percussion when running away.

Even with a few rough edges, it’s been pleasing to discover how enjoyable The Gunpowder Plot is over the course of its three-hour running time. It’s definitely not without its problems, and it’s more expensive to download for most of the world, but it seems that Sumo Digital have tried their best to improve upon the weaknesses of the first season’s four episodes. The result is a better balance of gameplay combined with a stimulating plot and a wide supporting cast, blowing this explosive adventure above the quality threshold set by its predecessors. If you’re not a watcher of Doctor Who, this game is probably not for you, but it’s available for free to those living in the UK and is worth a plunge for any fan of the eccentric time traveller.

The Gunpowder Plot is an improvement over past episodes thanks to an intriguing plot and balanced adventuring, but its simplistic puzzles do snuff out some of the fun.

GAME INFO Doctor Who: The Adventure Games - Episode Five: The Gunpowder Plot is an adventure game by Sumo Digital released in 20112011 for PC. It has a style and is played in a Third-Person perspective.

What our readers think of Doctor Who: The Adventure Games - Episode Five: The Gunpowder Plot 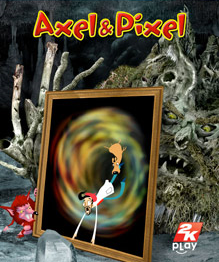 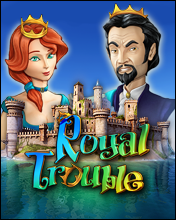 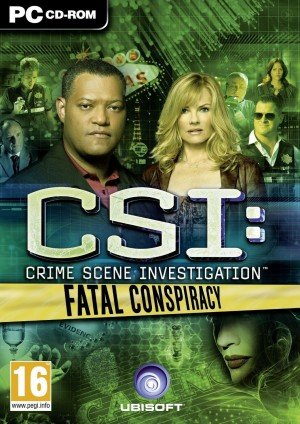 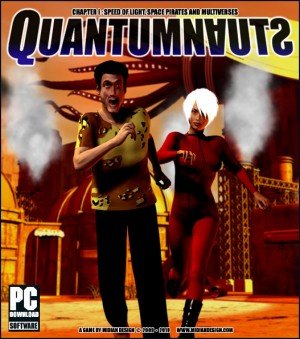 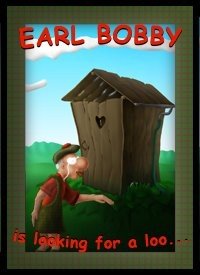 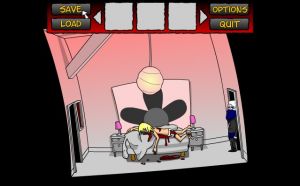 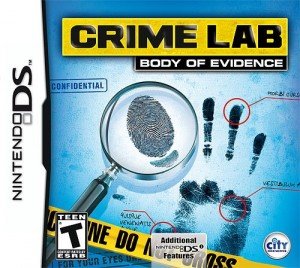