Exciting stories about historical mysteries and worldwide conspiracies are at the heart of the highly popular Secret Files series. We learned what really (might have) happened in the Siberian Tunguska region in the first game, and unravelled the prophecies of a dangerous sect in the second. Complaints often made about the series so far, however, are that the main characters have been somewhat lacking in depth and the stories are a bit clichéd. The Animation Arts team is now back at work on a third Secret Files game and to address these issues, this time they've brought a professional writing team from NEOS Film on board to help develop the plot, dialogue and characters. They’re also promising another spectacular, drama-packed story and a high tempo throughout the game, which were clearly on display in a short presentation we saw at gamescom.

The game’s introductory trailer sets the tone right away, showing us scenes of Nina and Max's wedding interspersed with fires, explosions and Max being dragged off by some kind of SWAT team. Of course, cinematics are often exciting, and the real game often less so. Fortunately, we were shown a few more scenes by the development team and got the chance to play a short demo for ourselves.

In the playable prologue, a thief is trying to gain entrance to the legendary Library of Alexandria in ancient Egypt. You’ll eventually succeed after solving a few puzzles to distract guards and avoid traps, but on your way out the Library catches fire and everything in it is lost... everything except for one precious amphora containing a scroll. The action then switches to the present day, where Max is trying to wake up Nina, who is having nightmares about a devastating fire every night. Not long after, a special forces commando team suddenly enters their suite and drags off Max without any explanation. Max only has time to tell Nina to “look after the bird”' before she is left alone in the apartment she recently moved into with him. They don't have any feathered pets, so she wonders if his instructions are some kind of clue that might lead to discovering why he was arrested.

Nina will be the main protagonist for the remainder of the game. At this moment, with about half of the game ready, it's not yet clear if Max will even be playable or not. With the focus primarily on her, the developers stressed the importance of Nina’s motivations this time. Contrary to movies that you watch more or less passively, where the motivation of the main character is the central reason to keep watching, when playing a video game there can be several simultaneous motivations. For instance, when Nina is trying to escape a burning church her only motivation is to get out alive. The player, meanwhile, has another goal: to solve the riddle and to find out more about the strange situation Nina finds herself in. Often this discrepancy creates a disconnect between player and character, but Animation Arts is determined to come up with puzzles that really integrate with the story, and they promise there will always be good reasons to solve them. 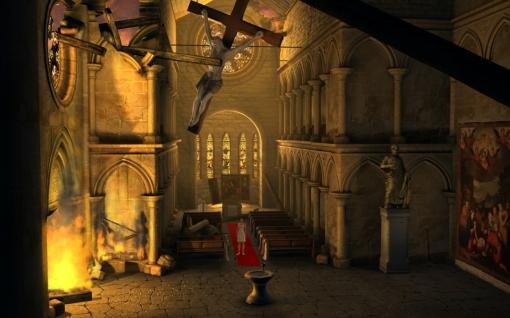 Obstacles will be based in real life, meaning there will be no far-fetched solutions and there will always be a logical answer. Difficulty-wise, they should be somewhere between Lost Horizon, whose puzzles were perceived as somewhat too easy, and Secret Files 2. The storyline will be revealed both through cutscenes, of which there will be many, and through various enigmas, which themselves should ensure the player is motivated to keep going even when a particular puzzle temporarily hinders progress. The puzzles themselves will mainly consist of classic inventory combinations, much like the previous games in the series. As Nina follows the clues Max left behind in their apartment, looking at photos, reading books and examining paintings, she finds a hidden compartment that holds a key to his office in the museum where they first met, so that's where she's heading next.

One example of an unusual puzzle they showed us involved an attempt to escape a burning church. The fire blocks all the exits and all we see is an opening in a wall high above us. The walls are too smooth to scale, but underneath the opening is a statue that we can climb. Unfortunately, the distance is too far to jump, but we can rock left and right until it topples over and ends up leaning on the wall just below the opening. Timing is essential in this puzzle, but with a bit of practise it shouldn't pose too much of a problem even for casual players, and if it does, the difficulty level can be turned down. In fact, help is plentiful, as the hint system from previous games returns, with a hotspot locator (Snoop Key) that reveals all interactive items and exits, and a Task button that provides a short summary of the situation and a small hint about what to do next.

To avoid spoilers, the developers didn't want to tell us a lot about the plot beyond what's outlined above, but they did reveal that we get to travel around the world and visit a few different eras, including Egypt and Turkey, returning as far back as 11,000 years BC. Nina's dreams and emotions will be very important, and the surviving scroll contains a riddle that refers to the origins of mankind. It will also give clues about where we are going as a species and where our very existence will lead us. They've put a lot of time into research to make the details as accurate as possible, mixing those historical facts with fictional elements to create a fascinating story. We were told that some plot elements from the first two games will return, but it is not at all necessary to have played the previous games to understand the new one. 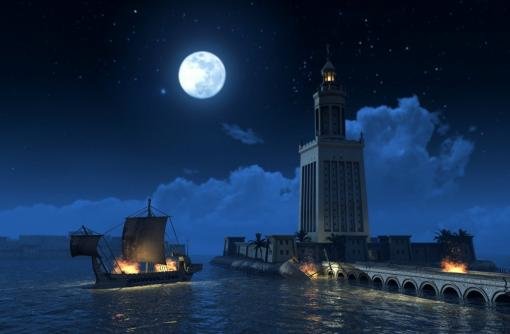 The point-and-click interface has been kept very similar to the one used in its predecessors, so if you have played them, you should feel right at home. Secret Files 3 is based on the same engine as Lost Horizon, and the visual style once again looks gorgeous, with lots of detail and great colours. Only a German version was available at gamescom, so I can't say anything about English voice acting yet, which hasn’t been the series’ strongest aspect to date.

Depending on your level of experience with adventure games, it should take between 12 to 20 hours to finish the game. But that opportunity is still a fair way off, as Secret Files 3 is planned for release some time in 2012. So let the anticipation begin, as its dramatic and mysterious story, high tempo and the promise of well-integrated puzzles sure have me excited, and it looks as if anyone who enjoyed the previous two games has plenty of reasons to be optimistic about the third installment on the way.

tsa
If you ride a motorcycle dressed like that you can just as well get rid of the helmet too :). But seriously, I look forward to this game. I never expected Nina and Max to marry though. They had this sort of on-off relationship. But maybe those last the longest, who knows?

Guyra
Oooh, this is great news! Really looking forward to this one. :)

adventor
hope this is awesome. Can't wait to find out.

Jackal
Probably not, as Deep Silver tends not to release playable preview material (at least internationally). But if they do, you can be sure we'll cover it.

gray pierce
I braced myself for bad news, particularly storywise. But it didn't come. Reading this I'm starting to think SF3 might become the best game in the series so far. This preview really had me jumping up and down the whole time. Thanks Astrid, any chance of a more extended preview somewhere in the future?
Advertisement
archived preview
continue reading below