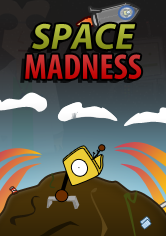 Spreadcamp's Space Madness is the debut adventure from Ray Logan, a solo developer from Germany. This comic point-and-click game puts you in the feet of Ed, a one-eyed yellow mutant who goes on a quest to quite literally meet his maker. Ed’s adventure is better than other games made by larger teams, displaying a strong sense of humour throughout, but Space Madness also suffers from a lot of problems – some niggling, some severe. The plot doesn’t manage to live up to the potential of its science fiction premise, and issues such as weak puzzles, repetitive music and short play time further conspire to drag the overall experience down.

Waking up on a desert planet, our rectangle-shaped hero initially has no memory of where he came from. His surroundings at first appear lifeless, but heading underground reveals a community of fellow mutants. Ed soon learns that he was born (and trashed) as a failed experiment by Professor Marty, a scientist attempting to clone himself aboard his spaceship. With that realization, Ed makes it his mission to build a rocket ship in order to blast himself into space and board Marty’s ship, the U.S.S. Serling. Even after doing so, however, Marty’s security systems don’t make it easy for you to get to him: overheating the engines and getting rid of still more clones are just some of the obstacles to be overcome before Ed comes face-to-face with Marty.

The setup is certainly intriguing, but it stops short of being particularly interesting, only dismissively noting that Marty plans to take over the universe and that he has dangerously decided to harness the power of a black hole for his testing. Rather than delving into the more sinister backstory, the plot here just comes across as slightly clichéd and undercooked, which is a shame because there are elements that could easily have been better fleshed out. The mutants who inhabit the wasteland planet, for example, are all fellow Marty experiments as well, but they don’t share Ed’s ambitions. They do help him, since they don’t have much else to do except drink and eat from the pizza trees, but they offer little insight beyond that. When you visit their local hangout, some of them are sitting at a table, yet you’re unable to even have a conversation with them. Exploring the origins of these supporting characters would have been far more interesting. 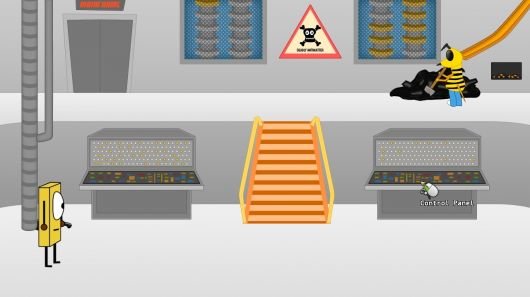 Ed himself is forthright creature, set in his goal and unafraid to speak his mind or mess with people to get his way, but often he just asks questions and lets others do most of the talking. The secondary character list isn’t huge, but along the way you’ll bump into a fishing fish, a dancing robot and a fortune teller, among others. The game’s comedy is perhaps its strongest point, with a particular highlight being a trippy and bizarre drug (well, it’s called ‘placebo’!) sequence. The humour comes mainly through the visuals and snappy dialogue that’s often genuinely amusing, like a talking skeleton recalling the embarrassing time when he oblivously fell asleep on a planet with limited oxygen. The downside is that there’s no voice acting, which would have not only have helped further form the characters’ personalities, but also enhance some of the gags. There is a text-to-speech accessibility mode in a kind of a computerized talkie attempt, but it has a bug which causes it to say some things twice.

Space Madness is presented in cartoony 2D art, often made up of simplistic lines and gradients. The colours are vibrant, with the dark blues and greys of space and Marty’s metallic ship providing a welcome counterbalance to the yellows and oranges that saturate the mutant planet. There are usually little touches such as random rubble falling through the sky or bubbling lava to offer a bit of ambient animation, though a bit more flair wouldn’t have gone amiss as some scenes are a little sparse. Still, the backgrounds are clean and easy on the eyes, from an underground pizza bar to the outer space supermarket. The art does suffer at times from perspective troubles, however, with certain architectural angles out of whack. The character models are nicely designed, with most mutants having distinctive appearances, but they are not very expressive and have only a few stock animations. And although it’s played as a joke, on separate occasions two different character models are reused, albeit with slight modifications. Oddly, Ed is the blandest of everyone you meet, with stick limbs and circle hands preventing him from emoting as well as he could. There is one moment in the game where Ed is meant to be running away, but instead he simply strolls off as usual, which looks silly.

The music is pretty good for the most part. A lingering, reverberating percussion track is used when Ed first lands, while more electronic pieces accompany the spaceship scenes. At first these work well, but it doesn’t take long for them to start looping and after a while they become a bit annoying. There is one track in particular which plays when Ed is exploring the underground town that is made up of mind-numbingly boring drum beats that just keep repeating over and over. In the end I turned my speakers down during those parts because it started to get on my nerves. While the sound effects sometimes suffer from the same issue of repetitiveness, they are suitably fitting to the sci-fi setting, from the bleeps of a computer to the swish of the doors. 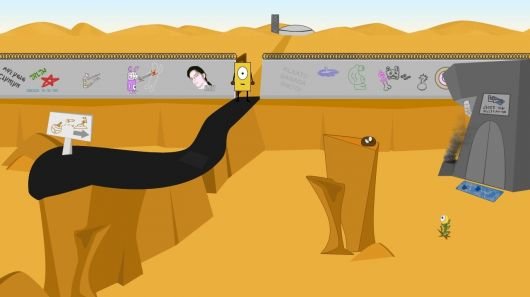 The majority of puzzles consist of using items from your inventory to get past obstacles or help someone, whether it’s a monster blocking a path or automating a bee’s work. These are fairly easy, since there are relatively few hotspots and it is usually clear what your aim should be (the broad objectives are displayed on-screen when they first arise). They only become difficult when it is not properly communicated what is required to achieve your aim, which happens on more than one occasion. In one instance, Ed needs to change his appearance to proceed, but there’s no clue at all that this is the case. In another, all that is required is clicking a single (and only) dialogue option over and over until the necessary solution happens. One of the better puzzles is a dancing game that sees you copying the moves of your competitor; other examples that stray away from the inventory, such as piecing together a picture to build a rocket, are also enjoyable.

The interface is simple and easy to use, with the mouse controlling all operations. The right button provides the look function on hotspots, while the left allows for context-sensitive interaction (talk, walk, pick up and so on). Moving the cursor to the bottom of the screen reveals the inventory, where items can be combined or brought out for use. The biggest negative is the locked 1280 x 720 resolution. Those using a higher resolution face black borders, while those restricted to a lower size may suffer pixelation from downscaling, which can make the text a bit tricky to read on occasions.

Available exclusively from the developer's website, Space Madness is an admirable feat from just one designer, but that doesn’t excuse it from criticism, and it certainly shows some telltale signs of an indie developer’s first game. Those who enjoy comic sci-fi adventures will probably find some light entertainment, mainly thanks to the humour offered throughout, but an undercooked plot and occasionally weak, sometimes illogical puzzles do no-one any favours. The game can be completed in just over two hours, and even that is capped off by an unsatisfactory conclusion. It ends on a note of excitement, but it’s a cliffhanger that offers no resolution, instead hinting heavily at a sequel. Overall, the first adventure of Ed the mutant can be a blast at its funniest, but its problems prevent it from ever managing to fully reach orbit.

Space Madness has several highlights stemming mainly from its humour, but some poorly designed puzzles and plot limitations keep it from ever really taking off.

GAME INFO Space Madness is an adventure game by Spreadcamp released in 2011 for PC. It has a Comic cartoon style and is played in a Third-Person perspective.

What our readers think of Space Madness 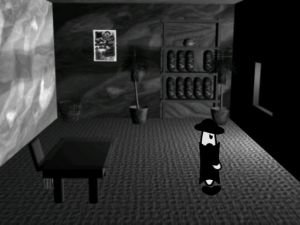 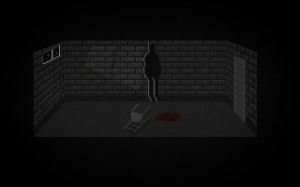 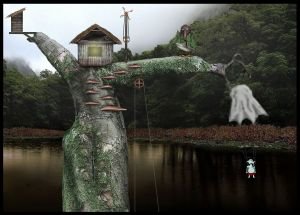