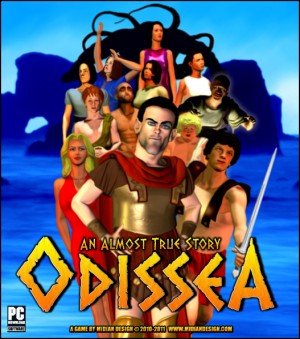 Days after the end of the decade-long Trojan war, king Odysseus of Ithaca is en route to his homeland when his ship is waylaid by violent storms conjured up by his staunch enemy, Poseidon, god of the seas. Forced to dock at an unknown island, the king’s men are soon captured by man-eating Sirens, and he himself barely escapes when the goddess Athena provides a raft for him. Thus starts his voyage home, a marathon journey of ten years chronicled in Greek poet Homer's magnum opus the Odyssey, the basis of Midian Design's quirky, irreverent indie adventure, cleverly (and honestly) titled Odissea – An Almost True Story. Clearly developed on a limited budget, the game suffers from a distinct lack of graphical polish and relies almost entirely on rigidly linear inventory-based quests, but the engaging cast and outlandish twists go a long way in compensating for the obvious shortcomings and holding your curiosity throughout.

The departure from canon is obvious from the start: Odysseus (addressed here as Ulysses as per Roman mythology) travels alone instead of with his crew, and claims to be the real author of the epic poem, often revealing his plans to understate the severity of the bizarre events unfolding around him and colourise his own escapades to better suit the sensibilities of his future audience. Add to the fray some naked vegans led by an alien god, a Britney Spears-lookalike nymph in red stilettos aboard a grounded spaceship, a corpulent god of winds, a hostile hag that drugs pigs and lions for fun, a mythical monster robot straight out of Transformers and a romp through the underworld, and you have a game that you can only wish had the depth of gameplay and production quality to truly unleash the immense potential contained in its premise.

Odissea works with concepts taken from its source material, but doesn't warrant even a working knowledge of Greek mythology to sail through comfortably. That said, familiarity with the events of the fateful trip and the colourful cast of characters would allow you to fully savour the witticisms sprinkled throughout the script. The story itself is tweaked to create an interesting blend of the mythological and the modern, and in many segments provides alternate – and equally improbable – explanations for the events depicted in the Odyssey. For example, Ptah, god of the Libyan ‘lotophagi’, ('lotus-eaters', named due to their diet of the hallucinogenic flower), is depicted as an alien, possibly based on theories that suggest ancient gods and their 'divine technologies' were actually contributions of visitors from outer space. 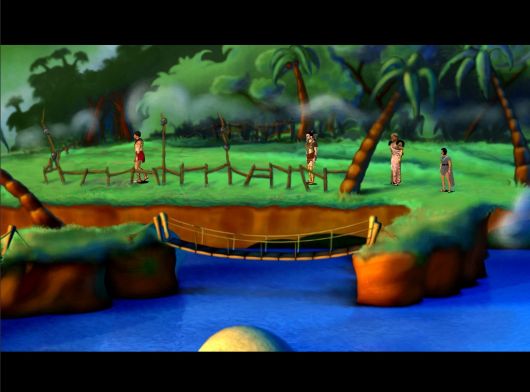 Similarly, impish ideas are extended for Polyphemus the Cyclops and legendary 'sea monsters' Scylla and Charybdis, while some plot points are included simply due to their Greek origins, such as a bit about Atlantis and the search for the Antikythera, an ancient astronomical device. Though tongue-in-cheek, the correlations are intriguing, and Ulysses' consternation as he encounters one strange contraption after another is rather amusing. Finally he resigns himself, muttering "There is little that astonishes Ulysses now." as he discovers the vimana, a magnificent flying machine resembling a metallic Mayan pyramid on thrusters.

While playful and complex in concept, Odissea is extremely simple in operation. The game world is very basic and sparsely inhabited: each of the dozen-odd locations hosts only one interactive character no matter how many are present, which greatly limits conversation, over-simplifying quests while making required information scarce. Ulysses can talk with each character using the available dialogue options in any order without consequence, but sometimes new statements are added to the list based on current situations, making it important to revisit characters you’ve spoken to before.

For the most part, Ulysses adventures on his own, either floating around the map on his raft or solving inventory-based puzzles with a meagre collection of items plucked off the barely-furnished screens. The controls are easy enough: left-click on an object to interact with it, and right-click to bring up the utility panel at the bottom of the page to access the action buttons and inventory. Besides walking and talking to other characters, you can look at and use items, alternately using the mouse wheel to cycle through the options if you wish, a convenience that's forfeit if you play with a laptop with a touchpad – in which case you have to toggle back and forth between the action buttons on the utility panel and the item being manipulated. 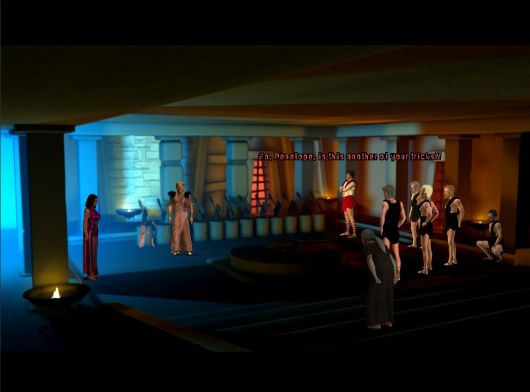 The crux of the game is its inventory puzzles, which could have been challenging if not for the fact that the game is strictly linear and Ulysses has only one or two items with him at any given time. Most screens have only three or four hotspots, including non-essential items, and objects are named when the cursor rolls over them, though the interactive ones are usually obvious. Inventory is used only with onscreen hotspots, and some can be re-used. Only one puzzle has an inexplicable solution, requiring Ulysses – without any obvious reason – to repeat an action multiple times to succeed, but that's an aberration amidst otherwise logical quests. The two standalone puzzles aren't remotely difficult, as one is a simple pattern match exercise solved by trial and error. There’s a verbal riddle clue to solving the other which is repeated several times, but in the absence of an archival mechanism for dialogues, there is a risk of missing it altogether if conversations are skipped through.

Unfortunately, Odissea takes its name a bit too literally, and forces you to spend an inordinate amount of time navigating the Mediterranean Sea on an unmarked map, searching for places to dock instead of focusing on actual puzzle-solving. There are no indications during conversations or along the lengthy coastline spanning two continents of where to go next, and the tedium of clicking the map randomly hoping for an accidental reprieve is compounded by the fact that locations are only activated sequentially based on your current progress. This forces you to continually roam around, literally bouncing off impenetrable storms until you manage to find the newest landing place. It is easily the most annoying aspect of the game and interrupts the otherwise smooth and rational flow far too often to be excusable.

Odissea's art is ordinary but reasonably attractive. The locales, though simplistically designed, each have a distinct topography and are vibrantly coloured, from witch-hag Circe's verdant island to the fire-drenched Hades. The characters are three-dimensional and realistic with a slight cartoonish touch, and some, like the mini-skirted Calypso, naked Am-Aled and chubby Aeolus, are hilariously incongruous to the context of the original epic, and all the more memorable because of it. Several cutscenes present segments of the story and forward the game, and though animation is generally limited to rain, flickering flames and fidgeting characters, Ulysses' movement is commendable. He walks naturally and executes his characteristic poses, like crossing his arms over his chest when inactive, with surprising grace. Also impressive is the concept and animation of Scylla's modern rendition, which welds together a quintessentially Greek multi-headed monster with extra-terrestrial machinery. 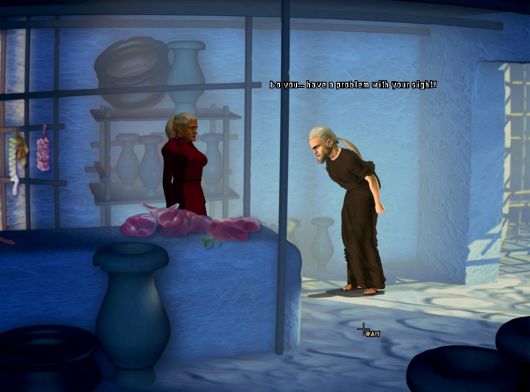 The orchestral background score is quite pleasant, creating a suitable cultural and historical ambience interspersed with a few space-age loops in areas with high-tech gadgetry. Sound effects overcompensate for the absence of voice acting, however, and the game is overwhelmed with background noise ranging from thunder and lightning to howling winds, splashing waves and incessantly bleating sheep. The highest point of the game's production is undoubtedly its script; originally developed in Italian, the English version is well-translated with grammatically correct and typo-free comments and descriptions that are crisp, clear and witty. The pointy Greek-style lettering of the hotspot descriptions is a little difficult to read, but that's a small concession to stay in sync with the overall theme.

As the lead, Ulysses is a paradox of conceit and courtesy. He's inherently arrogant about being the king of Ithaca and conqueror of Troy, but at the same time he's unfailingly polite towards everyone and possesses an endearing sense of humour that perseveres even in totally alien circumstances. Whether he's needling Aeolus about how he makes wind, arguing with the guard at the gates of Hades that "an adventure is not a true adventure unless the adventurer enters dangerous places without a good reason to do so", or berating the player for trying a previously-successful inventory solution for the third time ("the lack of imagination is depressing"), Ulysses' droll comments make this game entertaining from start to finish. The supporting cast isn't dull either; interplanetary researcher Karkargnor has the last laugh in response to Ulysses' claim that his father thinks he's smart, retorting "parents are rarely objective."

Overall, Odissea – An Almost True Story is a clever little game with an engrossing tale that ends all-too-abruptly in an anti-climax after massively hyping up the final confrontation, leaving one crucial inventory item, earned after a long and complex quest, strangely unused. But though it’s easy to nitpick about its clunky map or simplistic art or overly streamlined gameplay, the fact remains that at a retail price of $3.99 from the developer’s website, it may just be worth the six-odd hours of your time for its imaginative premise and smart script, buoyed by an irrepressibly optimistic hero and a motley bunch of human, ghost and alien guest stars mouthing sassy repartees that will leave you wishing that the odyssey had lasted a little bit longer.

Despite its limited production quality and linear gameplay, Odissea is an inspired adaptation of the Greek epic that will entertain you with its offbeat plot and quirky humour if you wish to adventure with the great Ulysses on a budget.

GAME INFO Odissea - An Almost True Story is an adventure game by Midian Design released in 2011 for PC. It has a Stylized art style and is played in a Third-Person perspective.

What our readers think of Odissea - An Almost True Story