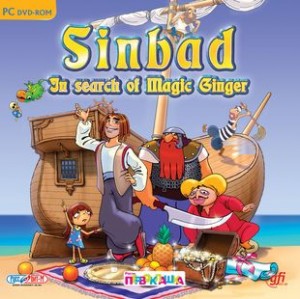 Sinbad: In Search of Magic Ginger

Mary in the Woods

We all know that you should never judge on appearances, and never has that rung truer than for Sinbad: In Search of Magic Ginger. Take a glance at the screenshots for this PC point-and-click adventure and you’ll see some bright, pretty cartoon artwork of fantastical lands on display. You’ll also just have saved yourself the two hours it takes to play through the game, since apart from the impressive visuals there are almost no other redeeming qualities on offer here. Developed by a small Russian studio called Dereza, Sinbad is inundated with problems, not the least of which is a vague storyline, horrendously translated dialogue and illogical puzzles that do no justice to its legendary inspiration.

It’s telling that I had to watch the game’s introduction twice just to understand the premise – not because it’s complicated, just because I thought I’d missed something. I hadn’t. The opening cinematic is presented in a comic book style that shows the titular scruffy-looking sailor out at sea. Suddenly, an old man appears aboard and tells Sinbad that he must find the seeds of the magic ginger. To do so, Sinbad must seek out someone named Kadir, since only he knows the location of the genies who possess them. At this point, you probably have multiple questions: Who is this old man? What are these seeds and what do they do? Why does Sinbad accept the request? Nothing is ever clearly answered. The closing cutscene is equally nonsensical and explains zilch.

What we get instead is plenty of butchered, broken dialogue that makes the matter worse. Early on, Sinbad quips that “something here is just incomprehensible” and I’m glad he feels the same way. Since conversations can run for a fair while, it becomes a chore to try understanding what is actually being said. Things are written in a way that no-one would ever say out loud – and they don’t, since there’s no voice acting in the game (apart from briefly, and poorly, in the introduction). Typos, missing punctuation, wrong tenses used, entire sentences pure gibberish... you name a mistake, it’s made countless times here. Merely one of many examples is when Sinbad asks someone about Kadir and they reply: “Hey, you are moving like a turtoise! A starfish in your ear!” Numerous characters also have stock phrases that they repeat mid-sentence for absolutely no reason, like a pirate saying “a thousand sea-urchins to my liver.” It just comes across as a cheap attempt at characterisation without actually injecting them with proper personalities. At the very least all this mangled dialogue is a slog to read through, but at worst it prevents you from comprehending what your next move should be. 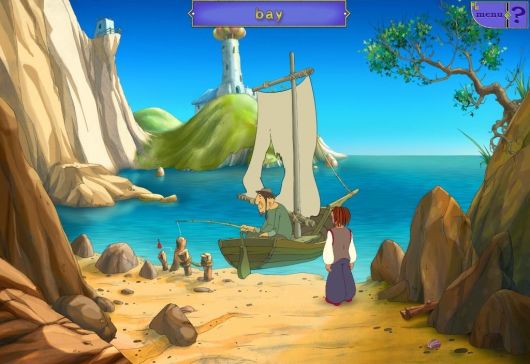 Sinbad’s “journey” takes place mainly in and around the Uzbekistan capital of Bukhara, and only in the final third does it progress to a mystical fantasy land. When you first meet Kadir, he agrees to help you as long as you can secure the sale of his house. This element of helping people out so that they return the favour, whether it’s cheering up a group of women or curing someone’s bad back, forms the foundation of your travels through the city’s shores and shops, right down to the genie who will only give you the seeds if you reunite him with his brothers. The land of the genies brings some fantasy elements to the fore, but although you’ll encounter odd creatures both on land and below, you’ll still spend most of your time performing mundane tasks for other people.

Despite the majority of the action taking place in a rocky, sandy environment, the colour scheme is not saturated by dull browns. Instead, whether it’s the cloudless blue sky or a slithering red and white snake, the colours are always vibrant and the scenery great to look at. The mystical genie world isn’t very imaginative, unfortunately, with its underwhelming yellow skies and twirling vines. It’s a change from what comes before it, but it’s certainly not a huge one. Even so, the 2D art is certainly Sinbad’s greatest strength, with character designs that wouldn’t feel out of place in a classic Disney cartoon, from a voluptuous woman at a window ledge to a scraggly pirate near his ship. Just by looking at people you can get a sense of their personas; far more so than if you had to struggle through trying to talk to them.

The music and ambient sound are also quite good, though limited. Little touches such as the bleats of camels and buzzing of insects heard outside, or the chatter and clatter of activity inside a tavern all add to the atmosphere, though that’s all you get for long stretches. The music is very evocative of the initial setting with its soft flutes and bongos, but despite only playing periodically it still becomes slightly boring after a while since there are only a few tracks in total. Conversely, these tunes feel very out of place when you’re in the land of the genies and something more mystical would have been better suited. 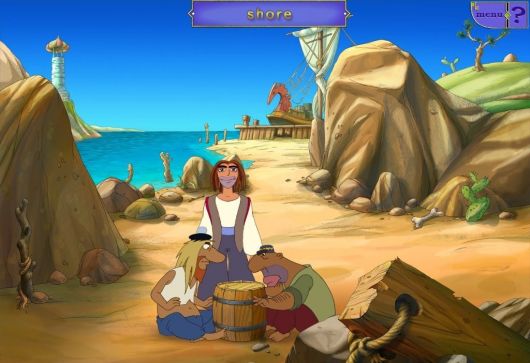 It may look and sound nice, but as an interactive adventure this game barely qualifies. You can’t manually walk Sinbad around, as he’ll only move when you interact directly with hotspots, of which there are very, very few. Arrows hover over exits and the cursor is context-sensitive, appearing as a speech bubble over people or a hand over items to be picked up. Not that the latter is necessary, as the rare clickable items are already highlighted in red, which is daft. Other decisions are equally questionable. For instance, the top of the screen permanently displays your current location in bold letters, which serves no purpose and simply clutters the background art. Also, instead of each individual’s dialogue lines appearing as they are said, entire conversational sequences are grouped together at the bottom of the screen five lines at a time, being progressed with a click. This results in burying your head in whole blocks of text and not watching any of the character animations. The interface also suffers from a few technical problems, such as refusing to acknowledge clicks or scroll the inventory, but I was always able to resolve these by leaving the scene and then returning.

Any items you collect can be accessed from the top left corner, where the inventory can either be locked in place or set to open only when you move your cursor over it. The inventory puzzles in Sinbad sometimes have flickers of value to them, but on the whole they are subpar, mostly due to the fact that their solutions are never properly communicated. Whether this is a translation or design fault is unclear (it’s probably a mixture of both), but some of the solutions just make no sense and it’s immensely frustrating. At one point you have to get a donkey from someone, but there are no clues at all as to how you should do that, forcing you to try using everything in your inventory (which is mostly acquired by people giving you things) until something works. Other times you know what you have to do, but you can’t progress because you haven’t triggered a certain conversation topic yet. A lot of the time I found myself just clicking the hint button (which “hints” by directly telling you what to do next) simply because I was baffled as to what I should be doing.

At two hours in length (minus the aimless wandering), Sinbad: In Search of Magic Ginger is plainly inadequate in both quality and length, which is a genuine shame because it could have been so much more on the back of its strong art style and legendary source material. Unfortunately, apart from its charming visuals and some decent music, there’s nothing much worth your time here thanks to the flimsy storyline, incomprehensible dialogue and often illogical puzzles. If you really want to watch a beautiful Sinbad cartoon, the better bet would be to rent DreamWorks’ Legend of the Seven Seas, because even at its budget downloadable price, you should steer well clear of this one.

With plot, dialogue and puzzles that often make little to no sense, Sinbad: In Search of Magic Ginger is an extremely short adventure best sailed directly away from.

GAME INFO Sinbad: In Search of Magic Ginger is an adventure game by Dereza released in 2011 for PC. It has a Stylized art style and is played in a Third-Person perspective.

What our readers think of Sinbad: In Search of Magic Ginger