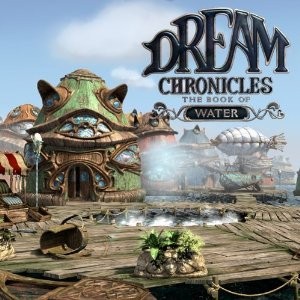 We get a small commission from any books sold.
All Bitmap Books
Written by
Merlina McGovern — June 15, 2011

Like a mirage of a soothing oasis in the desert that disappears when you get closer, KatGames’ fifth game in the Dream Chronicles series, The Book Of Water, sure is gorgeous to look at. But the beauty is largely illusory with little substance behind it, as you’ll quickly speed your way through a barely-existent story and its simple, repetitive puzzles. It’s all set against a beautiful, fantastical backdrop once again, but even then it’s one that returning players will have already seen most of before.

You play the game as Lyra, the half-fairy, half-mortal daughter of Faye and Fidget, inhabitants of the quaint little town of Wish. Lyra is returning home from her journeys in the previous game, The Book Of Air, only to discover that the town has been visited by the vengeful Fairy Queen of Dreams, Lilith. It seems Fidget had hidden the powerful Book of Water from Lilith, and she sought her revenge by descending upon Wish, bringing with her an eternal storm and casting a spell that left Fidget in a coma. Faye has departed in an attempt to stop Lilith, leaving Lyra alone to save both her father and the town.

Lyra’s quest includes little more than tracking down a potion that will cure her father, then locating the Book of Water itself for a spell to defeat Lilith’s storm. This journey is guided by a series of notes left by her mother, which aren’t particularly well hidden, often just sitting on the floor for you to pick up. Why these would escape Lilith’s notice is beyond me. Nevertheless, they help you make your way to fixing your broken airship and traveling across the various lands surrounding Wish. Opposing you at every turn is Lilith, whose disembodied voice warns Lyra away. She occasionally causes some mischief to slow you down as well, but this is merely a temporary inconvenience that helps fill up barely two hours of gameplay. 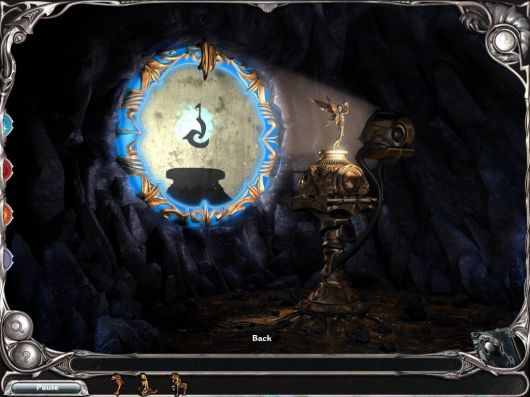 Your extremely linear travels take you through absolutely gorgeous scenery, with some scenes jam-packed with small animations. Everywhere you turn you’re met with intricate details and stylish swirls and curlicues straight out of the Art Nouveau period. The colors are gorgeously matched, with dark lavenders mingling with velvet indigoes and warm tans swirling with rosy hues. Two toy soldiers bend at the waist, greeting you at the front door of the town’s toy store. The store itself houses miniature camels racing around a track, rocking horses, and planetary mobiles swinging below a starry ceiling. The design is meticulous, right down to the small clamshell cabinet handles in a fishing shop.

While keeping the same fairy-like ethos, each of the different locations you visit has a slightly different feel to it, from the dark coziness of Wish to the floating houses in Barge city to the dry, arid wasteland of the Crater of Time. Unfortunately, many locations are ripped straight from previous games, with return stops at Merrow’s house, the Nexus, and the forge, among others. That’s fine for newcomers, but it’s little consolation for series veterans who have not only been there before but done that, too. Even some of the puzzles are simplified repeats of earlier challenges, like potion-making and repairing broken windmills.

Segueing between chapters in the story, the cutscenes are pans over static, hand-drawn pencil drawings all composed on pages of book as if you were being read a fairy tale. Traveling between major locations involves a large airship (itself returning from the last game, though no longer needing to be minigame-powered), which also contains a beautifully rendered map. This map features delightful animations like a serpent undulating in the sea and a cheerful sun blowing a puffy cloud across the sky. There’s a similar map in your journal, but it’s useless as you can’t use it to quick travel anywhere. 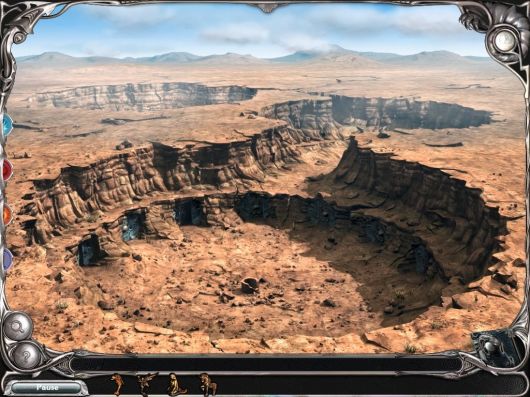 But The Book Of Water isn’t just a beautiful travelogue through fairyland. In addition to the obstacles Lilith throws your way, such as sending a bolt of lightning to knock out power or a gust of wind to shatter an object you might need, the people of this world enjoy puzzle locks. The toymaker won’t allow people to enter his shop until they’ve solved a puzzle first, though helpfully he’s left clues to the puzzle in a note sitting on the ground right in front of the door. Even the town itself is puzzle-locked. Wish is rather insulated, so it keeps its doors shut with an elaborate weight mechanism that you’ll need to figure out. Some of the puzzles are beautifully designed, such as a putting together an intricate model train that lets off a toot of steam as you finish.

Surprisingly, there is no difficulty option and many of the puzzles are extremely easy. As an added tease, at times you’ll see glimpses of what could have been more difficult challenges solved for you, leaving you with just an easier version. One intricate mathematical equation prompted me to pull out my notepad to take notes, but the game solved the problem itself, leaving just a simple answer needed to solve another puzzle. What’s worse is that some tasks still manage to be quite tedious and repetitive, like a series of tile jigsaws and a color layering sequence that was fun once but less so four times in a row. Rather than gaining in difficulty toward the end of the game, the puzzles just increased the tendency to repeat themselves.

If the puzzles were more entertaining, a little repetition would be okay, but there’s not much here that’s memorable. Guiding a toy train from its original station to a final destination is somewhat creative and pleasant to look at, but even that doesn’t involve anything more than following simple directions and clicking to re-route train tracks. The game does provide a skip button, but it refills maddeningly slowly (about three minutes). One nice aspect of this option, however, is that the game shows you the correct solution before moving you forward. If you’re stuck while exploring, there is also a tip button that provides a text hint telling you what to do next. The hints are very detailed, however, so click cautiously if you don’t want the easy puzzles made even easier. 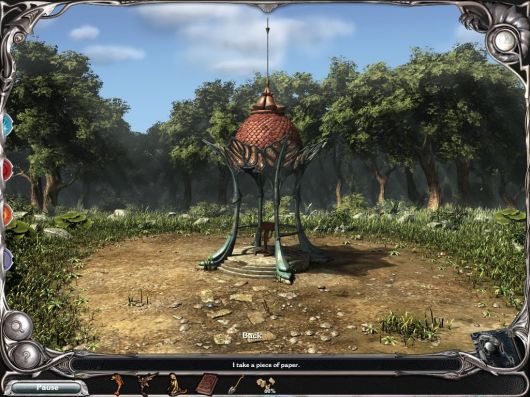 In addition to logic puzzles, you’ll also need to find inventory items to proceed. There is no default hotspot sparkle, but a text description appears above the cursor when you mouse over an interactive item. There is also a “locate” button that highlights difficult-to-find items, which you may have to use often as the scenes are so detailed that objects blend into the background. The Book of Water continues the series tradition of collecting scattered gems, though these are usually quite easy to find. You’ll need to fill four special jewels with a multitude of dream pieces to power up different spells, like the ability to decode fairy text and repair items. You won’t have to determine when to use these spells, however, as the appropriate icon pops up when needed. Two of the spells are only used once or twice, and in what seems like an unfinished piece of business, you can continue to collect jewels for a fifth spell that apparently never made it into the game. In a more blatant example of scaling back, one of Lyra’s main objectives is to find seven key objects, but three of them have already been found for you. You’ll get to find the other three objects only if you play the Collector’s Edition, which certainly seems restrictive given the short length of the main storyline.

At times it seems that no thought was put into where items were placed. Notes strewn about right in front of you and keys just sitting on the ground ready for anyone to pick up take a lot of the challenge out of the inventory “puzzles”. Occasionally you’ll have to look for multiple items of the same type, and the game helpfully lets you know what percentage you’ve already discovered. You’ll also be able to click on non-mandatory items. Unfortunately, the writers seem to have run out of creative steam with the descriptions for these. I can see that the umbrella in an umbrella stand is an umbrella without having to click on it. If you want to find out more about the items on a particular shelf, a click will reward you with: “This shelf is full of things.”

Another area that could have benefited from a bit more creativity is the game’s music. The fairly nondescript tunes reminded me of elevator music more than anything, and the same now-familiar tinkling theme repeats over and over again whenever you solve a puzzle. The ambient sounds do add nice depth, however, like thunder pounding from Lilith’s storm or doors creaking open when you enter someone’s house. The majority of the voice acting comes from Lyra, and her voice is soothing if a bit stilted and unemotional. You’ll also (re-)visit the Clockmaker’s wintry home from the last game and speak to him briefly through his mouthpiece, which is about it for characters. Lilith doesn’t do much actual acting, as most of her lines are done in barely discernable whispers warning Lyra away. 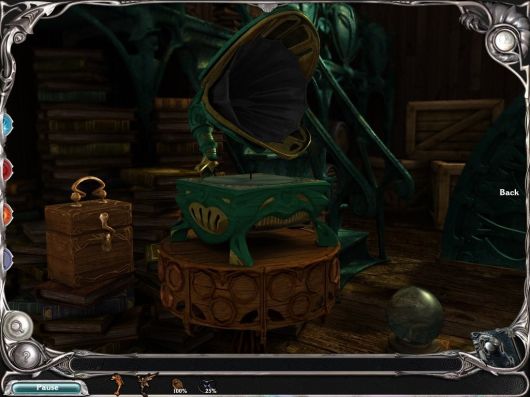 The Collector’s Edition gives you an additional hour’s worth of “bonus” play. A prequel to Lyra’s adventure, the story follows her mother Faye and her attempts to stop Lilith up until the point where Lyra makes her entrance. There are some great puzzles in this addition, such as a beautiful constellation-matching puzzle, but many of them are simply repeats of the challenges from the main game, including several of the tile puzzles that had repeated themselves several times already. And as if the repetitive puzzles weren’t tedious enough, the bonus chapter removes all hint buttons and dream jewel powers, although you can still skip puzzles.

Like the dream jewels that apparently petered out, Dream Chronicles: The Book Of Water represents a series that seems to have run out of steam. It's full of plot holes glossed over with easy and repetitive puzzles, and the series will have to find some serious inspiration for the sixth game hinted at in the Collector’s Edition, The Book of Fire, if it wants to break out of the rut the series has settled into. With its barest of storylines, over-simplified gameplay, and lack of creativity overall, this beautiful game shimmers superficially before evaporating into nothingness.

Without either a fully fleshed-out story or substantial puzzles, The Book of Water’s beautiful series of images is just an ephemeral mirage.

GAME INFO Dream Chronicles: The Book of Water is an adventure game by KatGames released in 2011 for iPad and PC. It has a Stylized art style and is played in a First-Person perspective. You can download Dream Chronicles: The Book of Water from: We get a small commission from any game you buy through these links.
The Good:
The Bad:
The Good:
The Bad:

What our readers think of Dream Chronicles: The Book of Water