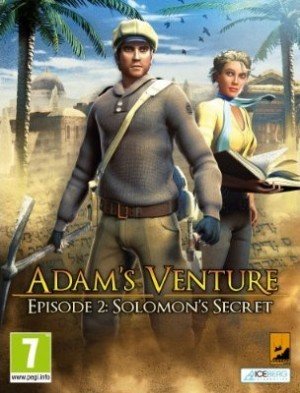 We get a small commission from any books sold.
All Bitmap Books
Written by
Reece Warrender — April 19, 2011

The first episode in the Adam’s Venture series, The Search for the Lost Garden, displayed plenty of promise that went somewhat unfufilled. It impressed with its visual and technical excellence, along with its sense of genuine “adventure”, but failed to convey any kind of depth, with a mediocre story that saw Adam and his girlfriend Evelyn solely exploring caves in search of the entrance to Eden. A summary of the entire instalment could be boiled down to: crawling through a few tight spaces, traversing some ledges, lighting a few beacons and rearranging a selection of biblical reference obstacles – not the most awe-inspiring journey. But that was merely the introductory episode, and thankfully the sequel, Solomon’s Secret, expands on the limited ambition of its predecessor in some welcome ways. It once again falls short in the area of storytelling, however, as the improved gameplay leaves the still-shallow plot in its dust.

Picking up just after the last episode finished, Adam has escaped the ruins of Eden’s entrance but promptly lands himself in prison for failing to deliver the results expected by the Clairvaux Corporation, the mysterious company supporting his expedition for unknown (but presumably evil) reasons. Of course, within moments you guide Adam free of his poorly constructed cell and prepare to set off on a mission to collect evidence and discover Clairvaux’s true goals, a rather righteous and idealistic quest. Before long, however, you become sidetracked when you learn that the temple of King Solomon is being “excavated” by Clairvaux. Being the avid explorer that you are and knowing the company’s intentions as you do, stopping them from ruthlessly plundering the temple’s legendary riches becomes your new priority. This involves making your way to Jerusalem, sneaking in disguise through the Clairvaux archeology outpost, and navigating the damaged but still remarkably preserved temple in a search for the throne room, solving puzzles and overcoming many physical barriers along the way.

Story segments are told via a handful of in-game cutscenes and dialogue between Adam and Evelyn, who remains his sidekick for the majority of the episode, this time accompanying him in person between periods of being separated. These scenes represent a lighthearted attempt to develop their relationship, to comical effect. The protagonists are fleshed out a little more than the last expedition, with Adam taking center stage as an arrogant, over-confident explorer commonly misjudging Evelyn as a beauty without a brain, even though she tends to remain one step ahead of him in puzzle-solving. Their relationship is filled with back-and-forth banter, and whilst Adam continually oversteps the line, the gentle nature of the game always has them quickly making up. 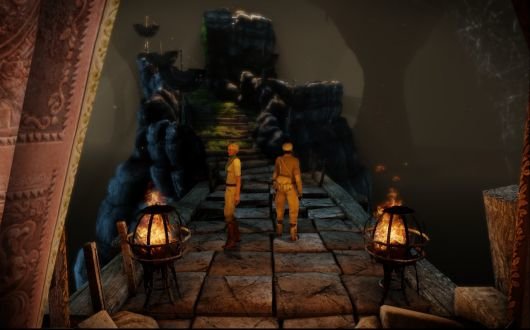 It isn’t long before you realize that the entire first episode seems to have no relevance to the current story. All background from that game, from the discovery of Eden to the smoke monster that pursued Adam through the caverns, gets brushed aside as insignificant here. That makes it easy for newcomers to drop into the series now if they wish, but a little continuity would certainly have been welcome for returning players. At first I was concerned that the events of this episode would be similiarly dismissed going forward, but as this chapter comes to a close, we’re treated to a cliffhanger ending that ensures a direct connection with what’s to come. Both episodes so far have been independently building towards a mystery still to be revealed, and although there’s no real clarity in sight yet, at least there are hints now that the story may soon pick up some much-needed momentum.

Fortunately, Solomon’s Secret manages to resolve its predecessor’s other main pitfall: puzzle design. Instead of placing repetitive tests of biblical quotes randomly around the environment as obstacles, here there's enough variety and challenge to remain interesting throughout. The majority of puzzles involve mastering sequences, like picking door locks by moving mismatched tumblers, calculating precise pressure gauge totals, and manipulating levers to open doors in the correct order, each of which you’ll need to repeat several times. There are numerous other light math problems as well, typically in the form of images that represent hidden values, requiring you to cross-reference sums and equations. There is one repeating timed puzzle that has you rotating discs at the correct moment to align them, though success is dependent on proper planning, not fast reflexes. Add in a coloured light beam challenge, a coded floor tile room and a conditional staff roster puzzle, and the selection represents a great step up in diversity and complexity from the first game, suitably increasing in difficulty as you go along and always entertaining to solve. It’s never made clear who is responsible for these strange mechanisms or why they exist, but they certainly aren’t going to deter an avid explorer like yourself.

When not solving puzzles, you’ll progress between them in light “platforming” segments that are reminiscent of the Tomb Raider or Prince of Persia series, just with less finesse (and far less skill requirement). Adam can only carry one inventory item at a time, which gets used automatically when interacting with the correct hotspot, but he is able to run, jump, climb ladders, drag crates, crawl through tight spaces and shimmy across ledges. With no mouse option, controls are keyboard-based once again, though the game does support Xbox 360 gamepads as well. A keyboard isn’t the most precise tool for the job, and some moves can be quite awkward to execute, particularly when needing to make precise jumps. These platforming elements are far from grueling, however, so even those unaccustomed to action games won’t feel out of place. Often invisible walls will prevent your death, but if you do manage to fall to your doom, you can immediately restore to a nearby checkpoint. Overall, these sections feel like satisfying novelties that break up the puzzle-solving and keep the activities varied. 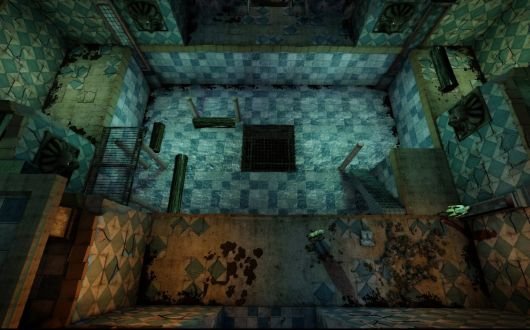 Items that can be picked up or manipulated faintly sparkle to alert you to their presence from a distance, while action keys pop up whenever they’re in range to interact with them. One nice touch is the addition of instructional overlays to indicate new actions as they’re introduced. This can be as simple as the crouch key displayed near a tunnel entrance or the jump key hinted on a wall near a hanging rope. It’s also nice to see the environment react to your progress, with pipes, ladders and passages collapsing when Adam no longer has the need to venture back. This helps guide you forward with suitable limitations in order to maintain clear and natural progression. Unfortunately, this restriction can become a little overbearing at times, as the platform sections typically involve moving in straight lines, under clear pathways and over obvious walls. While this prevents you from ever getting lost, it also prevents any real sense of free exploration.

Once again running on the Unreal 3 engine, Solomon’s Secret looks superb. The 3D environments in particular look stunning, vibrantly coloured with a fantastic use of particle effects creating realistic fire and smoke throughout the dusty temple, and enough ambient animations to bring the world to life, like lizards scurrying about and a rat busily grooming itself. Thankfully, Adam is no longer confined to the dark caves of the first outing, as you’ll now move through several exterior locations, from a desert prison camp through the dusty stone streets of 1920s Jerusalem before heading back underground for some temple locales that include ornate tapestries, carvings, and even an underground pool amidst the crumbling stone walls. Following a common trend with this engine, there is a little too much bloom lighting used, though it suits the bright sun-drenched areas more than the oddly over-lit buried temple interiors. Some nice camerawork adds to the visual appeal as well, occasionally sweeping over scenic vistas to impressive effect, though once again there’s no manual control over the camera while you explore. 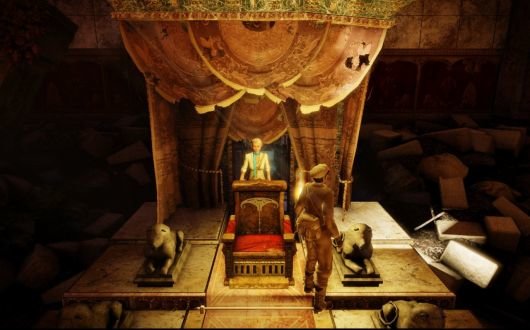 The characters, including a few Clairvaux employees and random strangers populating the city streets, show some of the same technical excellence found in the environments, displaying detailed, high quality models with fluid motion-captured animation. Designs are rather generic, with Adam bearing a typical Indiana Jones-type appearance, Evelyn the stunning blonde beauty and an evil adversary emerging with the stereotypical face scar, but it’s a comfortable familiarity that is pleasing to the eye. It’s a shame the attention to detail goes out the window when the game zooms in for cinematic close-ups, which show eerily blank expressions from the protagonists as they engage in equally scary-sounding dialogue. Some hammy voice acting is hard to take seriously, particularly from the glib, nasally-voiced Adam. The audio fares better elsewhere, with subtle sound effects from flickering flames to the gushing of flowing water, and orchestral music increasing in tempo when the danger is high to add tension before settling back to silence or a gentle Eastern-themed backdrop.

With this second instalment, Vertigo Games have taken positive strides in moving the Adam’s Venture series forward, adding refreshing variety to both the environments and puzzles. Unfortunately, the storyline hasn’t similarly progressed, and at the end of its three-hour duration, Solomon’s Secret once again concludes with as little sense of direction as when it started. If the next episode manages to create some continuity and actual development of the story arc while maintaining the technical prowess and great puzzle design enhancements seen here, it will certainly be an adventure to watch out for. In the meantime, we’re left with a decent episodic sequel that’s a step up from its predecessor, but still with some way to go to reach its lofty potential.

WHERE CAN I DOWNLOAD Adam’s Venture: Episode 2 - Solomon’s Secret

Solomon’s Secret takes strides to improve on the initial instalment with technical enhancements and varied puzzle design, but its weak storyline continues to hold it back.

GAME INFO Adam’s Venture: Episode 2 - Solomon’s Secret is an adventure game by Vertigo Games released in 2011 for PC. It has a Illustrated realism style, presented in Realtime 3D and is played in a Third-Person perspective.

What our readers think of Adam’s Venture: Episode 2 - Solomon’s Secret