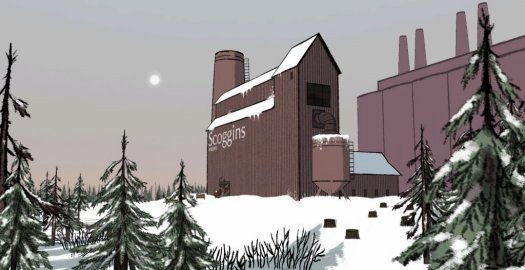 Who would have expected a game set in Minnesota to be so memorable? Scoggins, the sleepy setting of Telltale’s Puzzle Agent, combines cartoonist Graham Annable’s simple art style with the equally simple sensibilities of a remote northern American town blanketed in snow… and secrets. Soon after FBI special agent Nelson Tethers arrives by snowmobile, it becomes clear that something is “off” in Scoggins. Local establishments such as Valda’s Hotel and the Moose Ear Diner appear to be warm and hospitable, but when Agent Tethers tries to get down to business, the tight-lipped citizens give him the cold shoulder. No one wants to talk about the accident at the imposing eraser factory on the outskirts of town. That’s partly because the townsfolk are too obsessed with solving puzzles to give him their full attention. In another game this preoccupation may seem tacked on, but in a town as remote and eccentric as Scoggins, we’re willing to believe it.

Though its cozy locales and Nordic-accented inhabitants sprinkle the town with character, Scoggins’ stark outdoor locations are the ones we remember most. Vast landscapes with no footprints in the snow – yet someone has been here. An icy forest that yields a grisly surprise. Bright eyeballs shining from the shadows. (You see them, don’t you?) Those shivers running down your spine aren’t due to the weather. No, there’s a mystery adrift in Scoggins, and it infuses this seemingly idyllic winter wonderland with an ice-cold edge. Who knew little guys in red pointed hats could be quite so terrifying? Puzzle Agent combines cute and creepy in a wintry rural landscape unlike any other, and for that reason it made the Aggie cut for this year’s Best Setting. 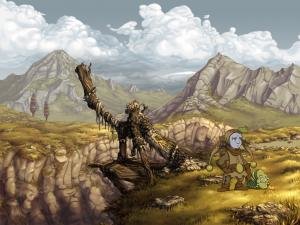 The world of Silentia is about to be destroyed unless young Sadwick can stop it, though he himself is fated to cause its ruin. And what a loss our readers have decided that would be, clearly impressed by The Whispered World’s rich fantasy setting filled with rural caravans, lush forests, cliffside towns, and towers in the clouds. Of course, it doesn’t hurt that it’s all beautifully designed in stunning hand-drawn 2D artwork.