It’s hard to get too excited about a sequel to a game that hasn’t even been released yet. We’ve previewed Akella’s WWII-thriller A Stroke of Fate: Operation Valkyrie, but there’s still no word on when the game might be released in English. Nevertheless, the publisher offered an early glimpse of the sequel, Operation Bunker, at the 2010 gamescom. Not the kind of opportunity to turn down, clearly.

This arrangement does put me in the sticky position of having to spoil the outcome (though not the plot) of the first game. If you’re sensitive to such things, you’ll want to skip a few paragraphs, because the spoiler is simply too integral to the story. In fact, really it's best to consider A Stroke of Fate a two-part story that isn't yet complete when the first credits roll. The main character is still senior Gestapo officer Gerhard Mayer, who in the first game had put himself to the task of assassinating Adolf Hitler. Since that remains his goal this time around, it’s safe to say that he failed. Some people would get killed or flee after that, but Mayer is a determined man who isn’t about to let failure stand in his way. It may not have worked the first time, but he somehow managed to avoid suspicion and hold onto his rank, so he begins planning his next attempt right away. 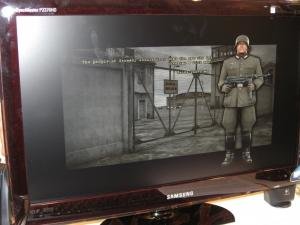 Not that it has gotten any easier. While Gerhard spends a few months getting ready, the war goes badly for Germany and Hitler becomes increasingly paranoid. Fast-forward to April 1945: the Russians are now at the gates and Hitler has retreated into his bunker complex. The starting point is much like in the first game, then, except that the tightened security should make the second attempt even harder.

With history having maintained its normal course (for now), attention to historical detail is still very much in evidence. Right in the first scene, there is a copy of Mein Kampf on your nightstand and actual historical speeches from German leaders are coming in through the radio. Everything from the decorations to the interface has a touch of period style, and the loading screens show quotes from the likes of Einstein and Schopenhauer, as well as certain German commanders.

I got plenty of time to read them, too, since the load times were significantly longer than I would have preferred or expected on what I assume was a pretty powerful demo machine. To be fair, this may have had to do with another game running in the background. The developers also have some work to do on the engine: while I’ve been told the final version will support many resolution settings, the version I saw had no widescreen support or in-game way to change the resolution at all.

On the upside, a certain commitment to style can be seen in continuing to offer a black-and-white option. Players who so prefer can experience the entire game in black-and-white or sepia tones instead of full color, just to get that extra classic movie feel. Overall, while there is nothing groundbreaking about the 2.5D graphics, they get the job done and the design is good. The scenes inside the bunker are understandably sparse, but there’s just enough grime and clutter to not make them feel drab and boring. Meanwhile, from the curious tape-machine accompanying the dialogs down to the interaction icons, the entire interface has a pleasant harmony of style with the rest of the game. What audio I could hear was acceptable as well, though the demo included little of the music and there was only Russian voice acting at the time. 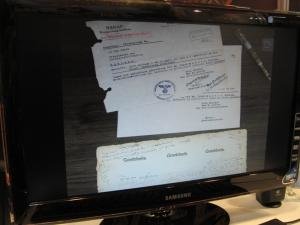 The gameplay is mostly traditional, but seems solid. One puzzle I saw combined inventory use, dialog and some thinking to break an old friend (from the first game) out of jail. Another puzzle required knowledge of graphology to fake Joseph Goebbels’ signature on a set of false orders. This takes the form of a minigame, where you need to correctly classify seven key aspects of the desired signature. The questions are multiple-choice and you can try again immediately if you fail, however, so you can’t really get stuck on this part. The full game will feature a total of four such minigame puzzles to complement its otherwise standard fare.

Ultimately, as is expected of a work-in-progress, there is clearly work to be done, but when the obvious issues are dealt with, this could turn out to be a pretty good title, as there are no glaring flaws and the premise and setting for Operation Bunker remain fascinating. On the other hand, I didn’t see enough to suggest this becoming a particularly big hit, so it would be wise to see how the first game does before getting too excited about this one. Of course, that can only happen if the game is released, as the English-language release fate of this series remains very much unwritten.

A Stroke of Fate: Operation Bunker 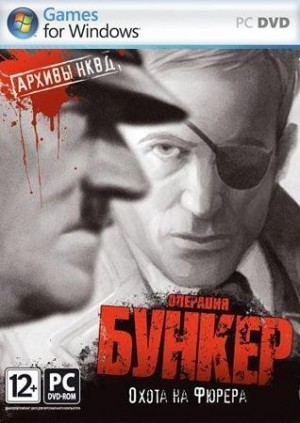 All A Stroke of Fate games (series/episodes)
» Discover other games