We get a small commission from any books sold.
All Bitmap Books
Written by
Reece Warrender — November 5, 2010

Robert Louis Stevenson’s Strange Case of Dr Jekyll and Mr Hyde remains one of the most influential stories that exist today, with countless adaptations spread across film, stage, radio, and other printed works. Somewhere in between all these retellings of the 1886 classic novella are several video games, the latest of which is Pixelcage’s Jekyll & Hyde. This is NOT to be confused with the 2001 action-adventure game with the very same title, as this is a completely new take on the familiar story. Unfortunately, whilst this latest iteration offers some engaging exploration and enough puzzles to please the average adventurer, some awkward controls and troublesome platforming elements will likely have players throwing themselves over the edge at times.

This particular adaptation is only loosely based on the original tale, as the focus of the game is on Jekyll and Hyde cooperatively chasing down the truth behind an ancient cult. Morphing between Jekyll and his brutish alter ego is done freely with the aid of a potion which players help create early on – albeit by mistake, as Jekyll is attempting to find a cure for a plague that has swept the streets of London. Instead of finding a remedy, Jekyll creates a potion that unleashes the beast within, and in doing so uncovers a series of caves beneath his estate. As you progress through these underground caverns, you will discover vast chambers and evidence of human civilization hidden here. From then on, you’ll slowly begin to unravel a deadly scheme that forces you to help those you hope to stop, solving intricate puzzles in pursuit of an item of immense power. London and all of its citizens are in grave danger, and only your two identities can defend them.

Exploring is certainly one of the main highlights of this game, as the vast, sprawling caverns below your mansion are filled with exotic Greek monuments and deadly traps. To navigate them, the game uses a free-roaming, third-person control system. The developers have made the effort to suit any preference by letting you use the keyboard, gamepad, or click-and-dragging with just the mouse to control the main character. What sets the game apart from traditional adventures is the ability to jump, crawl, and climb, adding some light platforming to the action. You will need to leap over countless chasms and run over tiles that spew columns of fire or are charged with electricity, requiring you to time your advances correctly. In order to spice things up further, the obstacles often need more precision or agility than Jekyll can provide, and this is when you need to make use of Hyde. Hyde’s tricks include being able to leap long distances, slow down time, walk through fire and use brute strength, skills you’ll gradually obtain as you progress. Calling on Hyde at will feels a bit thematically strange at first, but it aids the gameplay quite well. 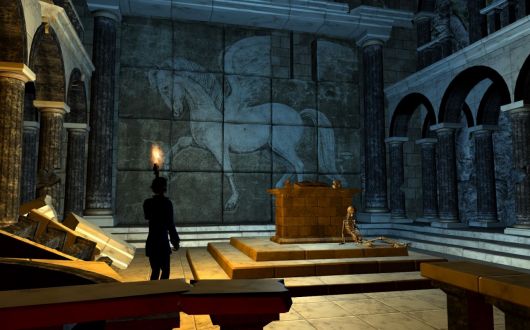 Unfortunately, the action elements can become frustrating due to some lousy implementation. Jumping over a gap, even a small one that Jekyll can manage, can be a chore because of the awkward controls and horrible collision detection no matter which scheme you use. More times than I can care to remember, I walked to a ledge only to fall to my death before being able to initiate the jump, or hit an invisible wall on the other side as the game decided I didn’t make it when all appearances indicated otherwise. It's a shame the mechanics aren't more responsive, as the obstacles themselves don’t require much action gaming skill to pass.

The frustration of death is somewhat offset by the liberal number of checkpoints that save your progress. Upon dying, you automatically respawn at the closest checkpoint, which is never more than a few minutes away. Your health is indicated onscreen and decreases when you take damage, but since most of the danger comes from large falls or traps, more often than not you’ll be killed outright. At the end of several chapters, you will need to defeat a ‘boss’, but these encounters are designed with puzzle-solving in mind instead of action. These enemies are welcome additions, further supporting the sense of danger and risk felt exploring the caverns.

Platforming pitfalls aside, the adventuring aspect of the game delivers quite well with puzzles that are generally intuitive. There are clear ties to Greek mythology in both the environmental design and the puzzles you encounter, so you’ll need to solve sliding tile puzzles adorned with a depiction of Pegasus, determine the correct order of sequences by looking at star signs, and even dismantle huge statues of the gods. These puzzles are quite frequent as you move from place to place, and they fit nicely in their respective locations. In between the larger puzzles, you will need to manage an inventory of items in order to solve simple challenges such as creating light, opening a locked door or creating a mould. By collecting recipes and ingredients, you can also create new potions using a portable laboratory, following vague instructions with trial-and-error to gauge the correct amount of each ingredient. When you hit the right amounts and create a new potion, your existing Hyde potion will be upgraded. This potion sits in a rather intrusive quickslot ring that’s constantly displayed onscreen. As Jekyll, this is where your inventory is stored, but when playing as Hyde, these quickslot buttons act as your abilities, allowing you to quickly toggle them on or off. 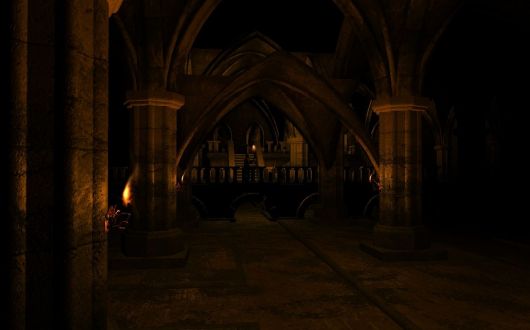 With the generally intuitive puzzles and an option to highlight all hotspots, there is no reason you should ever become stuck and need to consult a walkthrough. That is, unless you hit a brick wall as I did, in the form of a bug that simply disabled the interactive option on a particular object. Restarting the section resolved the issue, but this is just one technical problem of many you may encounter on your adventure, from falling out of mine carts whilst riding mid-track (the camera decided to carry on without me there) to simple errors like walking on air.

This lack of polish also shows in the lacklustre animation that adds to the clunky feel, as it’s choppy, unnatural, and often delayed. Right from the first moment, Jekyll begins waving his hands around repeatedly, but instead of looking like a conversational gesture, it’s rather silly and completely out of sync with the dialogue. This is a common trait of all characters in the game, and a complete lack of lip syncing – or lip movement of any kind – even intrudes on the game’s impressive voice work. Supporting characters include Ann Cunningham, the love interest of Dr Jekyll, Coltrane the ever-faithful butler, plus Rufus de Lombard, the man who is arranged to marry Ann, and his father. Jekyll is a likable protagonist, mild-mannered and well-meaning, while Hyde obviously isn’t as noble, mocking Jekyll in his brief dialogue by calling him weak and trying to belittle his actions.

The cinematics are done using hand drawn cut-outs sliding across the screen, looking somewhat like an animated diorama. This style fits the game quite well, given the period in which the story is set. As for the in-game environments, Jekyll & Hyde uses more of a realistic style. Although the scenery isn’t overly detailed, this comes off reasonably well since the majority of locations are underground, with grand eerie halls and corridors littered with skeletons, corpses, statues and even strange mechanical creations. One graphical aspect that excels above the rest is the particle effects. Each time you discover a waterfall or use fire in heavy shadows, these scenes are portrayed nicely. Jekyll often needs a torch to explore, the light beaming around him as he plunges further into the lurking darkness. Unfortunately, the same can’t be said for the character models, which are rather primitive and lack proper expression. Usually the only one present is the prim Dr Jekyll in his tailor-made suit, and while I’d love to say that Hyde fares better as the fearsome inner beast he is, he more resembles a particularly large man in need of a haircut and a back wax. 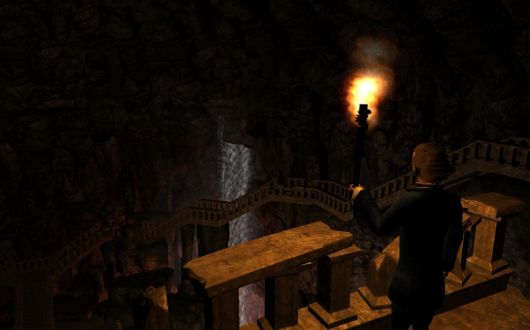 In terms of audio, the game is rather forgettable outside of the voice acting. There are never periods in which you recognize the music adding to the ambience, immersing you further. On the other hand, it isn’t a distraction either, pleasantly content to fill the silence without much atmospheric impact. The sound effects occasionally falter, however, as there are times you’d expect a noise to trigger but nothing is heard. One particular cutscene has you striking another character yet making no sound at all.

Ultimately, Jekyll & Hyde is a bit like its dual protagonists: a very mixed bag. It’s more adventurous than most traditional point-and-click fare, and it’s got some promising features, such as using Jekyll’s alter ego to pass certain obstacles. But the presentation looks dated, and the poor control issues make the game feel unstable, too often replacing immersion and enjoyment with frustration. Anyone able to overlook its flaws will find an adventure of good length (around 15 hours) that offers a variety of puzzles and some platforming that’s light enough not to alienate those that aren’t too familiar with action games. It’s just a shame that the formula doesn’t quite work, as you’ll never be able to escape the darker, untamed side of this wildly uneven adventure.

There’s an entertaining and immersive game lurking inside Jekyll & Hyde, but it’s hidden behind a dated presentation and clumsy platform controls.

GAME INFO Jekyll & Hyde is an adventure game by Pixelcage released in 20102010 for PC. It has a Illustrated realism style and is played in a Third-Person perspective.

What our readers think of Jekyll & Hyde