Perhaps you can’t really ask for more from a developer than improvement, and that’s what the dark mystery adventure Alter Ego represents for Future Games—a significant improvement. This is the fifth major adventure produced by the Czech studio, and I had the (dis)pleasure of reviewing 2007’s Next Life, a thoroughly disappointing game with far more negatives than positives. Fortunately, Alter Ego shows that the developers listened to the negative response to that game and actually focused their attention on improving the trouble spots, ultimately producing their best adventure yet, although not without stumbling badly right at the finish line.

The game’s name is derived from the dual player-character setup—throughout the adventure you will alternate playing the thief Timothy Moor, a young rogue trying to make his way to a new life in America, and Detective Sergeant Briscol, newly arrived in the English town of Plymouth (circa 1894) investigating his first assignment—a very dark and unsettling series of gruesome deaths centering around the “White Beast,” Sir William Arthur Lewis, a strange young man of great wealth who has been accused of countless murders, all of which remain unproven.

Sir William has recently died, of causes still unknown, and been laid to rest in the local cemetery. However, the hasty and private funeral has created a new controversy, as Sir William’s tomb has already been raided and there are new dead bodies now piling up. Solving this mystery is Detective Briscol’s role; Tim plays out his story as a simple thief trying to take all he can while it’s available until the paths of the two heroes cross in the dark and violent final chapter. 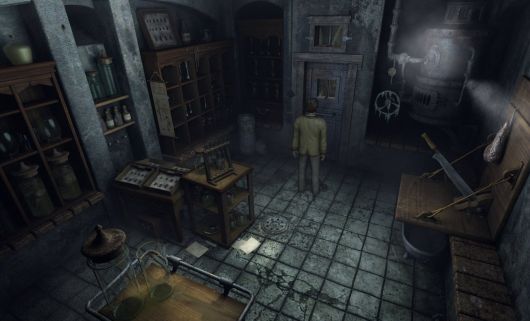 Both protagonists bring a good amount of unique personality to their characters, particularly Tim, who is a decidedly unlikable scoundrel—wisely, Future Games pulls no punches in exposing his devious and manipulative nature by giving us lots of inner dialogue. An early sequence where Tim alternates between sweet-spoken word and devilish thoughts to manipulate a young laundress is very well-written and ensures that this will not be the standard cardboard adventure hero. Detective Briscol is a polar opposite; an almost too-good, mildly snooty detective who sincerely hates not being right. His character is not very likable either, but somehow that’s fine because his dialogue completely embraces his nature rather than being ignorant of it. Neither character is one I’d ever want to be friends with, but they are both very interesting personalities to inhabit.

None of that, of course, would be possible without at least competent writing and strong voice acting, and thankfully both areas excel here. I’ve had no end of complaints about the voice acting in Future Games titles going all the way back to Black Mirror—I have those complaints about most modern adventures, to be honest—but I have no such quarrel with Alter Ego. The two lead voices are spot-on, with accurate and convincing accents and a clear understanding of their character motivations. They may sometimes fail to portray the correct urgency, but those instances are minor and the voice acting is emphatically a positive to the game.

The writing is also very strong, even moreso considering how well-defined the personalities of the two main characters are. Their observations of the game world are always true to their nature, and never is there a moment where an important sequence is undermined by confusing or flat dialogue. The important supporting characters, such as the ethically divided Father Mulkehey and the Lewis Manor housemaid, are equally unique and well cast; other secondary characters are far less distinctive, but are so insignificant that it rarely matters. 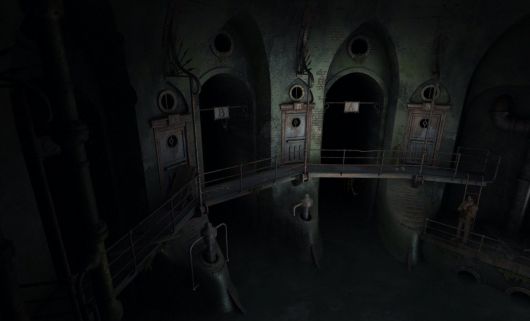 The understated quality of these elements lends itself to the overall mood of the game, which is dark and moody without attempting to be flat-out scary. Both characters stand opposed in some way to almost every person they interact with, creating a near-constant tension that is further supported by the ambient sound and dim lighting of the game. Although there is no visual blood or gore, the descriptions of bloody events are suitably creepy and unsettling, and the characters truly never catch a break—Tim Moor must escape from a sewer in handcuffs, is assaulted by bar thugs, attempts a robbery with the police in pursuit, witnesses a murder and even finds himself in danger of becoming the next victim; Detective Briscol, meanwhile, often fails to protect his investigation and is the target of surprise violence on multiple occasions.

The most controversial element of the game is sure to be the difficulty—or absolute lack thereof. Alter Ego is set up in such a way that it is truly an ideal adventure for beginners. Although it features standard inventory combination and usage puzzles, these tasks are almost always very logical and simple, with really no significant multi-layer puzzles. The game takes a very large extra step toward ease by eliminating useless hotspots after you have both looked at them (left mouse) and interacted with them (right mouse). With judicious use of the hotspot locator key, you will be able to quickly clear each room of every possible hotspot other than exits and items still necessary to complete puzzles. There are never more than three locations with a few screens each available to the player, so even in a “stuck” moment the process of elimination will solve every puzzle very quickly. I am one who often finds myself leaning heavily on walkthroughs, but I only used one once in the entire game (and kicked myself that time after learning the solution).

This simplicity will disappoint some gamers, particularly since Future Games has a track record of more challenging games. Some are sure to feel cheated by a game that takes only 8 – 10 hours to complete, with barely a significant challenge to speak of, so be sure you understand what you’re in for. For me, and no doubt many like me, gameplay that does not get in the way of the story is a nice change of pace. To be sure, many of us have probably been spoiled by the “detective” elements of Still Life and Sherlock Holmes, and even though one of our heroes is a police detective who carries a few of the standard investigative tools, this is definitely not a true detective mystery. At least, not in the sense of collecting and analyzing mass quantities of evidence—think of Detective Briscol as a “Diet Holmes.” 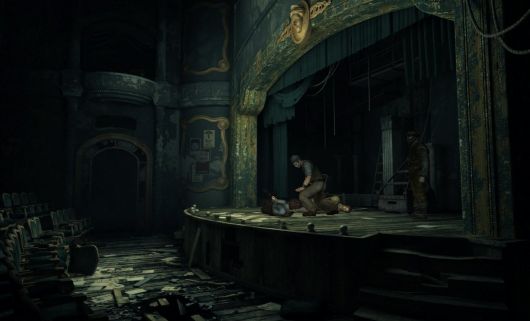 The game doesn’t shine in its technical elements, either. Alter Ego’s graphics are decent but never particularly impressive, and I experienced quite a few graphical glitches with the character models until dropping the hardware settings to a point where the animation became a problem. Additionally, while certainly moody, the environments are often poorly lit to the point where visibility can be troubling. A great deal of the game takes place in dim indoor settings, and it’s difficult to notice many of the important details without the hotspot locator. There are some modest cutscenes, but they are over so fast that there is little time for an impact to be made. The complete (and I mean complete) lack of any music is unfortunate as well; some light atmospheric tunes or a dark themed-classical soundtrack would have served well, and could have been used to more effectively distinguish the scenes of the two player-characters. Still, the game does make great use of ambient sound and voice effects—a scene near the end inside a church, with heavy voice echo and the foreboding sound of a rainstorm on the roof, is very impressive.

Unfortunately, the game’s biggest negative is its frustrating thud of an ending. There is a healthy bit of momentum as dead bodies continue to pile up and one of our heroes escapes near-death multiple times in the final hour. A cutscene runs that appears to set up a final scene—and then the game simply returns to the menu, leaving both characters in what I will generously call “unresolved” situations. It’s a Sopranos-style ending to be sure, leaving the gamer with a distinctly uncomfortable sense of wanting to yell, “No, really, what happened?!” The discomfort with the ending is somewhat more bearable if it is intended to lead to a sequel. If it’s not, then it’s a woefully misguided error in judgment that leaves the player with a negative final impression that undermines so much of the goodwill that the game has built. 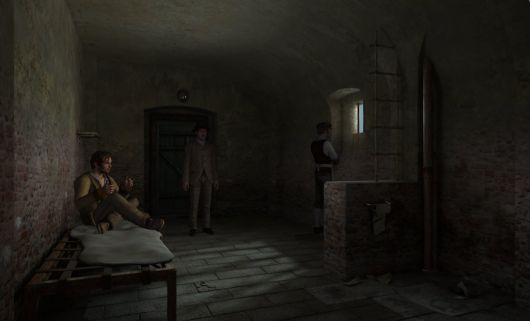 I’m not nominating Alter Ego for Game of the Year or any such thing, but it is very good at a lot of things—and almost great in some of its stronger areas, particularly the voice acting and dual player-character personalities. That should satisfy many of us adventure gamers—a game that doesn’t necessarily blow the doors off genre conventions, but instead is one that simply does almost everything well, without any major catastrophes or tragic flaws. There was never a point while playing, until the ending, where I was not enjoying myself, and I think that’s enough to make this adventure a solid recommendation.

Ultimately, although it definitely suffers for its extremely ill-conceived finale, Alter Ego shows significant improvements on some of the problems that plagued Future Games’ previous projects, and in fact is probably the best game the developer has produced to date. It is certainly a methodical and traditional modern adventure, but with measured expectations it will prove to be an enjoyable dark mystery adventure that—one can only hope—will clean up its unresolved ending in a sequel. I appreciated these characters and enjoyed how Future Games produced the story to this point, and I would be first in line to play a new adventure that picks up from here.

Playing Alter Ego is like reading a dark Hardy Boys book over a weekend: nothing special or substantial, but a very nice way to pass the time, and a recommended adventure.

GAME INFO Alter Ego is an adventure game by Future Games released in 20102011 for PC. It has a Illustrated realism style and is played in a Third-Person perspective. You can download Alter Ego from: We get a small commission from any game you buy through these links.
The Good:
The Bad:
The Good:
The Bad:

What our readers think of Alter Ego

3.5 stars out of 5
Average based on 23 ratings
Your rating

Nice atmosphere, lots of potential but..

Pretty nice game overall but lots of things that had potential to be developed more. Seems like the guys were in a rush to finish the game and tie all the loose knots. The voice... Read the review »