Hitchhiker’s Guide to the Galaxy Remake  (2010)

If you haven’t heard, read or watched anything about The Hitchhiker’s Guide to the Galaxy in the last 30 years, you’ve either been living under a rock or simply haven't been paying enough attention! The brainchild of writer Douglas Adams, H2G2 was originally an incredibly popular science fiction / comedy program hosted on BBC Radio in the late seventies. Following on from that success, it then managed to cross over into a number of different media, including a series of books, a television series, a computer game and (more recently) a movie.

The original 1984 game made by Infocom (and Adams) was a text-based adventure, which solely relied on words to describe and interact with the world around you. Similar to games such as Zork, H2G2 was both clever and challenging, and remains to many fans a cult classic. In the years since, the BBC has commissioned two flash-based browser remakes that are essentially identical to the original text game but adorned with decorative graphics. Now, however, the game has been given a full overhaul in the Hitchhiker’s Guide to the Galaxy Remake, a recreation of the original title updated as a point-and-click adventure. A fan project by James Spanos and Kevin Haddley, this is currently the only version of the game that completely abandons the text parser and adds interactive animated graphics to the equation.

For the H2G2 uninitiated, the story begins somewhere in the UK with Arthur Dent waking from slumber and being confronted with a rather nasty headache from a night out on the town. This, along with an almost blinding need for tea, soon become minor distractions when Arthur notices an advancing bulldozer outside the front of his home, intent on its destruction. At the same time, his best friend Ford Prefect makes a sudden appearance to prepare Arthur for hitching a ride with the spacefaring Vogon construction crew, which just happens to be on its way to destroy the entire Earth in mere minutes. Clearly, as the narrator notes, this is going to be the worst day of Arthur’s life. 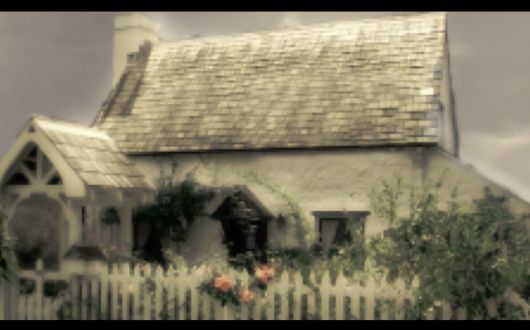 All these events are essentially a prelude to a collection of completely random and comedic adventures throughout the galaxy in which Arthur is the central focus, though you’ll also get to play briefly as Ford, Arthur’s would-be girlfriend Trillian, and the spacey President of the Galaxy Zaphod Beeblebrox. Carrying a copy of the ultimate traveller’s resource, the “Hitchhiker’s Guide to the Galaxy”, Arthur almost always finds himself in some sort of constant danger. Whether it is listening to torturous Vogon poetry, taking a moment to enjoy a sauna on a stolen intergalactic spaceship, or stumbling into the lair of the ravenous Bugblatter Beast of Traal, Arthur continually gets himself into the most interesting of situations.

Loosely based upon the first novel in the series, H2G2 follows the general thread of the original narrative up until you reach the Heart of Gold spaceship, at which point the script begins to vary to a degree. This mostly occurs by mixing up scenes and changing the type of interactions you would normally expect. One example is when you assume the role of Ford after using the “improbability drive” and replay the game's opening sequence through his perspective. These types of changes make the story feel fresh for H2G2 book fans and new players alike.

Graphically, the game aims for an early 1990s pixel art style and is fairly competent. Although at times lacking in detail, H2G2 does manage to convey a colourful sci-fi atmosphere, such as the Heart of Gold room that houses the improbability generator, which is visually one of the game’s more rewarding scenes. This standard isn't consistent, however, with many scenes that look overly sparse, such as the cave of the Bugblatter Beast and a party on Earth which you play as Trillian. Character sprites are generally quite good and are reasonably animated, with the exception of Trillian, though she doesn’t end up playing a major role in the game. There are some nice cutscenes that interject into the story and are fairly well done, including one involving a sperm whale that is particularly amusing to watch. 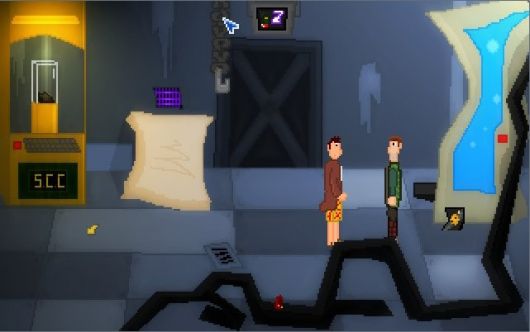 Audio is an area which performs a little better, with well-executed background music that changes from scene to scene and varies depending on the urgency or mood of the situation. There’s also a good rendition of the H2G2 theme track in the introduction sequence. Sound effects are also nicely done without going overboard, suitably helping to convey the sci-fi feel, whether it’s the subtle electronic whizzing noises made by cleaning bots, the sound of the transporting thumb device used to board vessels, or a Vogon guard walking along the metal hull of the ship. The settings display an option for voices to be enabled, though this feature has yet to be implemented.

Controls will be familiar to anyone who has played a point-and-click adventure game, using one mouse button to move the main character and handle interactions (look, talk, use) and the second to access your inventory. In the usual fashion, all hotspots are highlighted when the mouse cursor is placed over them, as are the exits, so navigating through the game couldn't be easier. The inventory offers a lot of control over items, allowing you to not only examine, use and combine items together, but also try more specific interactions like “open” and “feel” when applicable. Much like its text-based predecessor, there is also a considerable emphasis placed on space management for all the items you end up collecting. You have a very limited inventory space, so you need to store items in your gown or any other form of storage device you can find and carry. If you’re not careful, you can quickly run out of space, which will force you drop items. Whilst there are some objects of no use at all, there are others that you must hold onto (yet never use) in order to finish the game.

The overall H2G2 Remake gameplay concept is generally the same as the original title, but removes some of the more painful aspects of the '80s version. Not having to worry about finding the right phrase to suit a limited vocabulary or having to read through a detailed room description and manage perfect spelling under timed conditions makes for an enormous boost in playability. Some purists will disagree and religiously stick with the original version, but if you happen to be someone who didn't grow up playing text adventures or are intimidated by the notion of actually playing one, a point-and-click version makes it far more accessible. Personally my choice is this remake, as there is less time spent fussing with the interface and more time interacting with the graphic environment and experimenting with the puzzles. 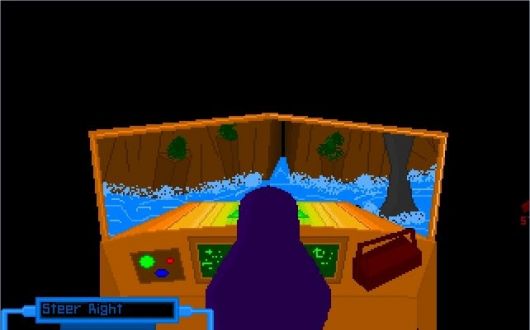 Unfortunately, a number of H2G2’s puzzles have always felt like they were forced in, rather than being a natural part of the story’s progression. These challenges vary from being somewhat unpredictable to completely eccentric. Many of the obstacles rely more on trial-and-error than any degree of reason or intelligence, requiring you to find obscure items to solve almost completely illogical puzzles. For instance, there is a point where, without warning or any type of context, you need to give another character an item, but unless you happen to check for it in your inventory, you won't even realise you have it, and until you've played further along, it won't make any sense whatsoever as to why you needed to complete this action! Finding items in itself can be a challenge, as some of the key objects are well concealed, and if you happen to miss an important one as play progresses, you can be killed without much warning. Or worse, if you’re playing on the “Hitchhiker” setting, you will be allowed to continue until you come to an inevitable dead end.

There are two versions of the game to choose from: Strag (normal) mode and Hitchhiker (hard) mode. The difference between the two is subtle, but the easier setting allows slightly more inventory flexibility, although if you drop an item, you cannot pick it up again. It also gives you a little more time with puzzles, but kills you almost immediately if you make a wrong choice or don't have the right item to progress. At that point you have the option to restore an auto save, which takes you back just before you made your error or missed something crucial. The Hitchhiker mode allows you to drop items and pick them back up, but forces you to do a bit more juggling with your inventory. The auto save feature is available in this mode as well, but the game will let you play on without realising you are completely stuck.

What is great about every version of this game is the impact of having Douglas Adams as one of the original writers. The script oozes wit and charm and draws you into the H2G2 world with very little effort. Whether it’s random cutscenes that elaborate on a galactic war that could have been prevented if only you hadn't chosen some words carelessly, talking to Marvin the super-intelligent but manically-depressed robot or trying to convince a Vogon guard that now would be a good time to change careers so he won't throw you out of a space lock, there's plenty of entertaining dialogue and amusing scenarios along the way. 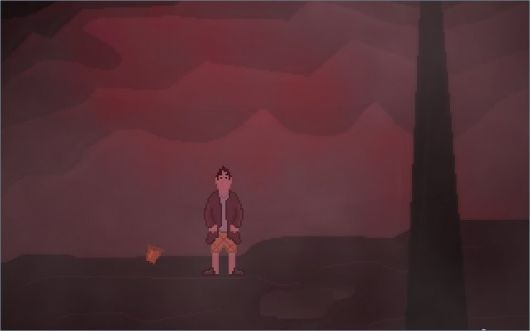 Despite its drawbacks (most of which are carried over from the original game intact), I found the H2G2 Remake to be quite an enjoyable game. It is a very close adaptation of the text title, and its update into graphic adventure form should help it reach a much wider audience. If you’re a fan of the books or any of the other Hitchhiker's Guide to the Galaxy iterations but never quite got into the text adventure, this may finally be the gaming opportunity you’ve been waiting for. And even if you’re not familiar with the source material but are simply looking for a challenging, decent-sized adventure, this is certainly not a bad place to start.

The H2G2 Remake can be downloaded from the developers’ website. To play earlier browser-based versions, check out the original text reproduction and the BBC’s two different illustrated Flash games.