When Penumbra: Overture first emerged in 2007, it defied easy classification. The first-person “survival horror” game placed a heavy emphasis on physics and puzzle-solving over action, and as the series progressed through a full sequel and final expansion, eventually even the last-resort combat was dropped altogether. Amnesia: The Dark Descent is not part of the Penumbra series, but the latest title by Swedish studio Frictional Games is clearly a spiritual successor. I’ve had the chance to play through the first few hours of the game, and I can already assure horror fans that another unsettling, potentially-pants-peeing adventure awaits.

I’d tell you what Amnesia is all about, but I forget. Or, well, your character forgets. As the game’s title suggests, you awaken in a desolate castle with no real memory of who you are or how you got into your current predicament. You cling only to the vague recollection of your name, Daniel, along with a disturbing sense that some kind of “shadow” is hunting you. The amnesiac protagonist idea has been played out countless times before, but its simplicity is perfectly suited to the premise here. You’re all alone (or are you?) in a terrifying environment, and the only goal is to survive until you’re out, and hopefully rediscover the details of your lost past in the process. You could be anybody.

You eventually do start to piece together a troubling 19th century backstory through notes and diary pages found scattered around, but the main emphasis here is all about exploration. Amnesia takes places entirely within an old Prussian castle, but it’s a massive, sprawling structure, so there’s plenty of ground to cover, your virtual head bobbing in step as you go. Many areas are on the verge of collapse, however, so you’ll often need to find alternate routes past broken columns, floods, and cave-ins, not to mention a few locked doors and mechanical obstacles. Oh, and you have to do all this in oppressive, eerie darkness without falling prey to the horrifying creatures stalking the halls.

If you think it’d be hard to keep your wits about you under these circumstances, you’re more right than you know. While Daniel does have a health meter to monitor, far more important is his sanity gauge. Staying in the dark for too long causes him to panic, which blurs and wavers the screen, making him harder to control. Finding light will restore your vision to normal, but not permanently recover your sanity. Fortunately, solving key puzzles or finding important items restores some peace of mind, and there are "sanity potions" to discover as well. It’s not possible to lose your mind completely (I tried), and any differences between states during relaxed moments are so subtle I couldn't discern them (though Frictional says they exist), but it’s motivation enough to keep you constantly on the watch for light sources.

The castle does have some windows and torches providing a dim backdrop, but their sanity-saving illumination doesn’t extend far, so you’ll often find yourself scurrying from one to another. You can pick up tinderboxes to light candles and oil for a lamp you soon acquire, but you’d be amazed (and quite duly alarmed at) how quickly these can run out at the worst possible moment. At first you’ll use them liberally, but soon you’ll begin treating them like the precious resources they are, dousing your lantern the second you don’t absolutely need it. It’s annoying not to be able to simply pick up a candle, and some areas are a little too dark for the available items at hand, but on the whole this battle against darkness offers a sadistically creepy tension.

There are other items to search for as well, as Amnesia includes its share of inventory puzzles. Often these objects are inexplicably scattered, but solutions are always logical: keys open locks, and a crowbar is for prying, though unfortunately only once. A few sequences are lightly timed and some puzzles have multiple steps, such a mixing various chemical components, but I encountered nothing too taxing once all the clues and items were located. I was also pleased to see the inclusion of real-world physics as part of the problem-solving required. Pushing heavy items out of the way, stacking crates to build platforms and bridges, and tossing a few well-placed projectiles all factor in, and it’s a welcome shift from traditional point-and-click sensibilities. 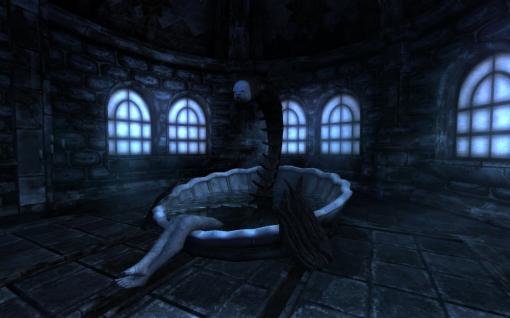 Such physical interaction is emphasized even during regular exploration. Along with the smooth keyboard/mouse controls that let you go anywhere freely (access permitting), bottles and chairs can be carried, cupboards are opened by actively pulling the mouse towards you, valves are rotated by spinning the mouse clockwise, and so on. These actions help maintain the illusion that you are the player character, rarely forced to stand back as a spectator while interactions are played out in front of you. This emphasis on first-person immersion is no accident, as it’s the stated goal of the developers never to take immediate control away from the player even through cinematics or plot shifts. There are moments when Daniel suddenly succumbs to flashback memories or reacts to a troubling scene involuntarily, but true to their word, even these scenes afford players a limited element of actual control.

Players may determine everything Daniel does, but plenty is going on around him that you have no control over. At times the entire screen shakes as the building trembles, leaving a trail of destruction in its wake when it subsides. In another area, a mass of pulsing, webbed red goo begins to overtake a large chamber and its adjoining hallways. Many touches highlight the great use of sound in Amnesia. Apart from the occasional solemn orchestral track, the game largely forsakes music in favour of ambient effects, and it works well. That’s you in that castle, and no one’s playing any tunes for your amusement. Instead, rain pelts outside, peals of thunder rumble in the distance, and the wind howls through the barren, empty corridors, offering no hope to quell your relentless fear. Inside, tortured wails and terrified cries ring out, and the castle itself wearily groans as if straining under the weight of its own terrible secrets. You’re alertly tuned into every sound, never really sure how near they are or what dangers they might portend.

As for the danger, the question for many adventure gamers will be where this adventure ranks on the action scale. Frictional claims that enemy encounters are fairly rare throughout the game, and I can attest that during the three or four hours I played, I was confronted by only one actual threat, with a few other near-misses more implied than real. Terrible zombie-like creatures do prowl about occasionally, but they don’t see well in the dark, and there’s plenty of that around, so they’re easy to hide from if necessary. Daniel practically hyperventilates as he cowers in the fearful blackness, but hey, that’s probably what I’d do, too. 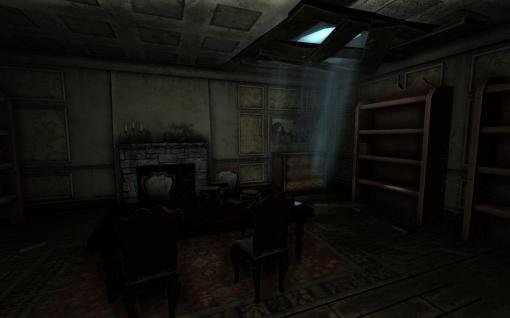 The one true peril I faced was part-brilliant, part-frustrating, fully satisfying to overcome. Avoiding an unseen underwater menace by staying one step above and several steps ahead took a little planning, a bit of jumping, and a fair bit of courage. I died once before I figured out what to do, but was simply restored at a nearby checkpoint to try again. Or perhaps not so simply. The developers stress that death has a tangible impact on the player’s experience, so retrying isn’t simply a matter of trying the exact same scenario until you succeed. They weren’t specific about the details of this concept, but indicated that it would be of particular interest to less action-oriented gamers.

The same freedom of control in playing Amnesia doesn’t extend to saving it, regrettably. There is no manual save option, as the game merely records your progress on exiting. I’m sure this is part of the same total-immersion emphasis as the lack of any visible interface except a tiny dot in the center of the screen, but this one is as much a hindrance as a help. The several distinct parts of the castle I explored, from old archives to a grand entrance hall to a wine cellar, were made up of a central hub with several sizable paths branching off of each. It’s easy to feel disoriented at first, but even when you get your bearings, you may find yourself stuck looking for one missing item or clue. The amount of backtracking isn’t inherently overwhelming, but doing so involves continuing to exhaust your precious light resources. Even a single manual save slot could save a great deal of waste on those occasions. (Frictional, if you’re listening, there’s still time!)

When I left off this lengthy demo session, I was about to board a primitive elevator with the warning that my “dark descent” was really just beginning. Gulp. One thing is already clear, however: horror fans should be ready to follow it down as deep as it goes when the full game is released. A story-driven adventure it’s not, and there are a few enemies to outwit or outrun, so the frail-hearted need not apply. But for anyone who craves disturbing atmospheric environments to explore and tension so thick you could cut it with a knife (if only you had something that sharp!), keep an eye open for Amnesia: Dark Descent later this summer. It’s definitely not a title you want to forget about.

Guyra
Great review, this has been my most anticipated game since the release of Penumbra: Requiem!

Giles Habibula
Hey, thanks for the write-up! I've been actively trying to find out as much as I can about this game. Really looking forward to it. I especially liked what you said about ambient sounds only, with no music. Good lord, that could really creep me out in fine style.

silent_m
Bring it on - the more adventure/horror games the better!

paul1275
Can't wait!! Penumbra really set the standard with it's mixture of horror and adventure. I hope that we see the same level of story telling as we did in Black Plague. I sometimes feel unsatisfied with the ending to some games, Black Plague not only ended well but really gave us a great reward for our time. Roll on the demo
Advertisement
archived preview