Freddi Fish and the Case of the Missing Kelp Seeds  (1995) 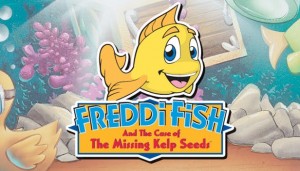 With several popular series like Pajama Sam and Spy Fox to its credit, Humongous Entertainment was once “the” name in point-and-click adventure games for children, and is beginning to become one again thanks to new console ports of their games. Freddi Fish and the Case of the Missing Kelp Seeds, targeted at children aged 3-8, is another such game. Originally released in 1994 for PC (the source for this review) and Mac, this game has now been resurrected on the Nintendo Wii as Freddi Fish: Kelp Seed Mystery. Sadly, regardless of the platform, Freddi Fish’s first adventure features far less of the engaging entertainment that those other franchises provide.

After an opening spent swimming through the ocean and greeting all her friends, Freddi soon learns that Grandma’s kelp seeds have been stolen. Ever the willing detective, Freddi and her finny friend Luther set out on the case. The story progresses by collecting bottles containing messages left by a bumbling shark to remind him where he’s hidden the seeds. This shark, along with his more competent boss, is working for the Squidfather (complete with his pet “catfish”), and occasionally you’ll see them pop up in cutscenes becoming increasingly worried about the repercussions if they don’t find the seeds.

It’s a bit disappointing that you never get to interact with Freddi’s foes, and they only ever meet face-to-face in the closing sequence. This creates a bit of disconnection between the plot and player, and there’s a distinct lack of thrill and excitement from the sharks’ involvement. Being able to sneak into the Squidfather’s cave to search around for clues would have been a much more gripping, tangible experience, or at least seeing evidence that trouble is closing in behind them. Some apparent threats are encountered along the way, like when Freddi and Luther have to distract a fishy guard dog or delve into the darkness of the sea to retrieve a bottle from an angry bottom dweller, but there’s never any fear of death or capture. As a result, there’s no sense of urgency, and most of the time the adventure feels like more of a leisurely swim than an important hunt with potential danger close at hand. 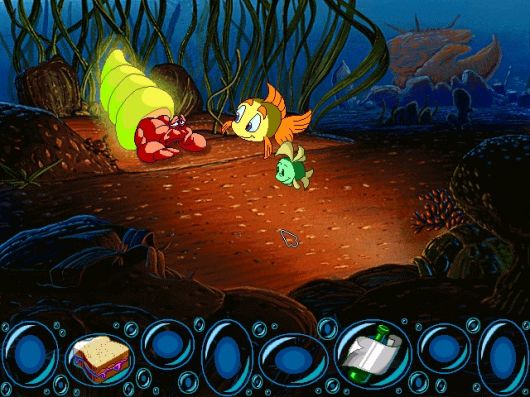 Freddi herself is a cheery young fish, and her chirpy and enthusiastic friend Luther tags along on her adventure, both of them keen to help out others in whatever way they can. As you progress, you will come across a whole host of different sea creatures. These colourful characters are wonderfully personified, from a jolly pair of finned pirates to the bucket-helmeted British castle guard fish to a shady stingray, each suitably matched with talented voice work. You don’t really spend a whole lot of time with them, so the conversations are quite condensed, but what dialogue there is will surely bring out a smile with its innocent humour and charm. The pirate song near the end of the game may even have children singing along in unison, and there’s a theatre you can pop into to watch a whole host of different performing acts, like a group of acrobatic carps or a one-octopus band.

Using just the mouse to control the cursor, Freddi Fish operates through a simple point-and-click interface. Chunky arrows indicate when a location can be entered, and the pointer highlights over clickable objects. Clicking can result in either picking up an item to store in the inventory at the bottom of the screen, or activating a bizarre animation in the environment – a flag folding back to reveal a fish showering behind it or a plant turning into a trumpet, for example – that are sometimes funnier than the actual game itself. Such simple interface and controls make the game a breeze for even young children to pick up and play.

The underwater setting had real potential to offer up an enchanting and exciting world to explore. Disappointingly, the game doesn’t capitalise much on this, instead offering fairly weak locales that aren’t very interesting to look at. There are only a couple of memorable places, like King Crab’s big wooden castle and a sunken ship, but they only stand out in comparison to the rest, as even these are rather underwhelming. The problem is that nothing breaks from the norm to produce anything fantastical: everywhere you look there are the same types of rocks, aquatic plants and debris, which may be realistic, but not particularly fun. After a while all the places you visit just merge into one bland underwater landscape, something that you wouldn’t expect from a children’s game. It doesn’t help that the sea world is poorly laid out, and with few labelled signposts it’s easy to become lost. In a game that’s full of such bright, vivid characters, it’s a shame the setting is the complete opposite. 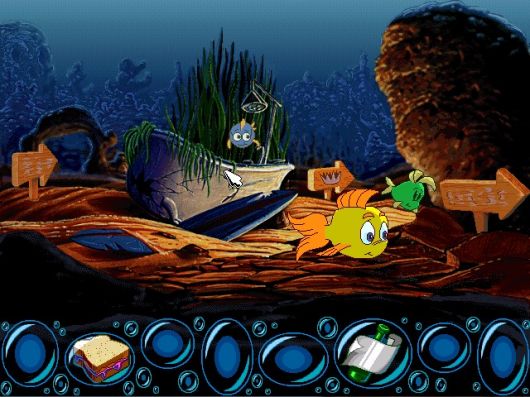 The presentation isn’t all drab, though, because the music is extremely mesmerising. The soundtrack makes great use of steel drums, guitars and piano, among others, and is wonderfully relaxing to listen to. It’s a perfect fit with Freddi’s slow, easygoing adventure through the sea, but when the sharks occupy the screen, the game will kick in with some Jaws-inspired music to signify where their intentions lie. The music is one of the best parts of Freddi Fish, and while you won’t quite be humming them after you’ve finished playing, the songs can certainly have you tapping your foot along the way.

The puzzles are quite cleverly done, although they have a tendency to be quite easy, probably even for much of the younger target audience. There are times when Freddi will just outright say where the player has to go next and what they’ll have to do there. Rather than finding a suitable way to get the goal across, this method comes across as patronising rather than helpful, though fortunately it’s only done on occasion. When a solution isn’t blurted out by the protagonists, there are some fun, albeit simple, moments such as collecting shells to open a gate or feeding someone blocking a cave to be let past. Freddi usually has to help others in return for an item she needs, although some objects are discovered lying around the environment. You can also choose to engage in a math quiz hosted by a starfish, a fun learning experience for children with varying difficulty levels. 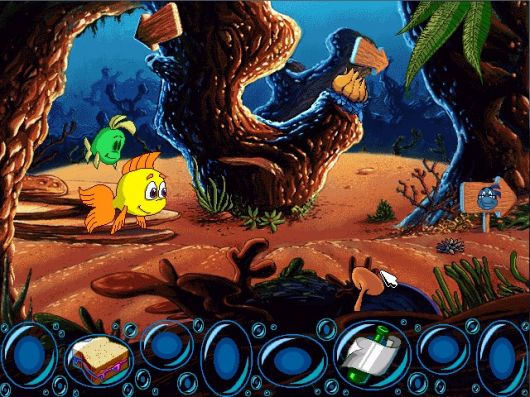 Unlike many other Humongous titles, there’s little to no replayability in Freddi Fish. Considering the game is incredibly short, clocking in at just one hour for me after exploring everything on offer, even the youngest players will be completely finished all too soon. Although the back of the box boasts a different world “every time you play”, the only thing that changes each time you begin a new game is where the bottles are, which is a trivial difference considering you can go anywhere you want at any time. On a single occasion you may encounter an extra puzzle involving a particular item that is otherwise irrelevant; a small step in a welcome direction that should have been more fully explored. During one playthrough, I even came across a bug in the bottle order that caused a whole chunk of the game to be skipped, advancing Freddi to the final location and effectively cutting out half the gameplay time in the process. It might not happen for others, but if it does it’ll certainly cause confusion and annoyance.

There’s definitely some childlike fun to be had with Freddi and Luther as they meet a whole host of colourful characters and help them in their troubles, but it’s hard to recommend The Case of the Missing Kelp Seeds nearly as highly as Humongous Entertainment’s other superior offerings. Mind you, if you’re looking for an adventure specifically for a lower age range, you really can’t go wrong with this one. The game will amuse children a single time through, though the charm heavily outweighs the depth of the gameplay available in this easy and extremely short ocean journey through a surprisingly lacklustre setting. Ultimately, this franchise debut is a missed opportunity and a rather half-hearted experience, though certainly showing enough potential to warrant the four sequels that followed.

Freddi Fish and the Case of the Missing Kelp Seeds is available at:

The first Freddi Fish isn’t as strong a debut as its older age counterparts, failing to fully capitalise on its underwater setting, though there’s some fun to be found by the young ones a single time through.

GAME INFO Freddi Fish and the Case of the Missing Kelp Seeds is an adventure game by Humongous Entertainment released in 1995 for PC and Wii. It has a Comic cartoon style and is played in a Third-Person perspective.