A while ago I reviewed the DS port of Myst, a dire experience which I thought would taint the legacy of the game forever, and yet when I recently got an iPod Touch it was the first game I found myself downloading. Hoping to get the bad taste of the DS failure out of my mouth, I was glad to discover that Myst on the iPod is both an enjoyable experience and a fitting mobile port of this enduring classic, though if you’re a Myst hater there’s nothing new here that will change your mind.

If you’re an existing Myst fan, you already know the score, but for those few who still aren’t familiar with the game originally released over fifteen years ago, the story begins when the player is transported to a strange island after reading its description in a book and unwittingly touching the last page. Such linking books prove to be an important feature over the course of the game. A man named Atrus has written these books but is now trapped in another world, and one or both of his sons, Sirrus and Achenar, are responsible. As the “Stranger” in these lands, it’s up to the player to help Atrus by exploring various “Ages”. Each of the four main worlds contains two coloured pages, one for each son, which reveal more of their pleas for freedom. It’s up to you to decide who is guilty as more of the story is uncovered, but to progress through each Age there are a series of devious puzzles that have to be solved. Though you start with practically no information about the world around you or your role in it, the backstory becomes deeply engrossing as you read all the books in the library and pay attention to the clues left by the brothers.

The four Ages are unique and can be visited in any order, though only once you’ve figured out how to get there. The Channelwood Age is a treetop village, where it is necessary to find out how to power the lifts and navigate its maze-like structure. In the Selenitic Age, the player arrives on a island that’s barren apart from one place where trees still grow and all the puzzles are based on sound, while underneath the island is a potentially torturous maze. The Mechanical Age is one of the smaller ones, featuring a rotating tower where the brothers used to live, and is based more around one large interconnected puzzle than a series of small ones. Linking to the Stoneship Age, the player lands on a very small island, with a prominent wrecked ship fused into the rock, giving the world its name. Surprisingly, this version doesn't include the "bonus" Rime Age that appeared as a kind of epilogue in earlier remakes of the game, returning Myst to its original form this time. 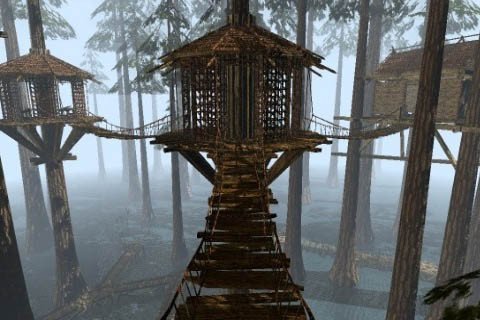 Moving around the different Ages is as simple as you might expect on the iPod Touch (or iPhone). All you need is one finger, as you touch the middle of the screen to go forwards and each side to go left or right. There’s a brief transition as you move between first-person frames, but there’s an option to remove this with a zip mode, which I turned on as the transition effect doesn’t look great and simply slows the game down. The puzzles are similarly operated with just a finger, though in some cases it might be easier to use your thumbs or employ both at the same time. Most can be controlled easily, but some hotspots are small and may take a few touches to successfully activate. In some places a zoom feature has been added, automatically enlarging any puzzle requiring more precise movement. This is most evident in the rocketship on Myst Island, though using its piano and manipulating the corresponding puzzle remain quite fiddly. Such control issues don’t occur very often, however, so it’s rarely a problem.

It’s important to pay close attention to your surroundings, as trial and error is simply not going to work in Myst, with solutions to some of the puzzles hidden in the environment. There are no extra bells and whistles in this version to help you solve them, although there is the iPod’s own screen capture feature for taking a picture to store in your iPod’s photo album. There’s no notepad built into the game, and I found myself reverting to the old pencil and paper method, though saving the game takes only a second, so it’s easy to make a quick dash to the iPod’s standard notepad app if you wish, which is handy for a mobile platform. I prefer this no-frills version in a way, as it makes it more true to the original Myst experience.

Graphically, this is a high quality conversion, both artistically and technically. The presentation is made up of beautiful pre-rendered scenes which still look great after all this time, as each Age has its own distinct, surreal atmosphere. The resolution of the iPod is 480x320, which is slightly lower than the original Myst (without the black padding), though displayed on a much smaller screen, which means the picture is both sharp and clear with no sign of pixelation, plus the images used have been enhanced from the original game. This visual clarity is helpful with the books in the library, which are perfectly readable with two pages on the screen at the same time, just like the PC version. The sound is not quite as good, as it is difficult to hear some of the more subtle sounds without the aid of headphones. This is only a small gripe, but could make the Selenitic Age incredibly difficult through the speakers alone. The live-action videos of the brothers seen inside the books have been retained, as has the original music, which are both adequate but not great. 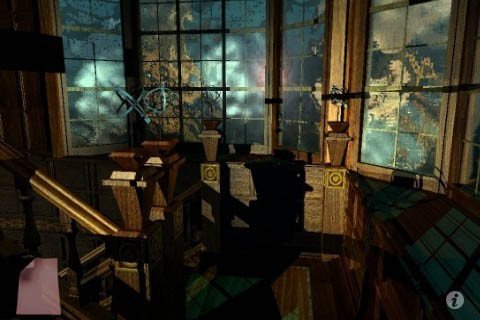 In the options screen, there’s a help feature explaining Myst to newcomers, which is basically a revised version of the book that came with the original boxed game. For those pull-your-hair-out moments, there is also a hint guide offering step-by-step clues in a similar style to UHS, so it provides the help you need without spoiling the enjoyment of the experience too much. There are four slots in which to save your game, which is more than enough, as there are no dead ends or major bugs that will halt your progress.

Fortunately, all the original puzzles are here in their complete form, as there’s been no scaling back for the iPod/iPhone version. In terms of difficulty, these puzzles vary from relatively easy once the logic is worked out to some that are quite taxing, particularly for anyone new to the series or this style of gameplay, with its obscure clues and heavy puzzle focus. There are some puzzles which never stop being fun even for returning players, however, like working out how to manage the flooded compartments of the Stoneship Age in order to explore it fully. The puzzles do tend to be of the love-them-or-hate-them variety, as the answers to all challenges are perfectly reasonable, but the effort it takes to discover the logic behind them has always, and will always, turn some players off. 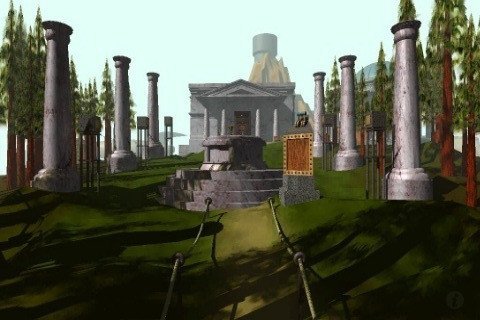 Of course, even a great port does illustrate some of the limitations of having Myst on a portable device. The environments can be very detailed, and mobile screens are… well, tiny. This means that some puzzles are inevitably difficult to operate without an average-sized monitor, using (relatively) chunky fingers instead of the precision of a mouse. Given the simplicity of its point-and-click controls, this isn’t too much of hurdle and shouldn’t effect your enjoyment, however, and is certainly an adequate tradeoff for the privilege of having a game you can play on the go. The other benefit of iPhone/iPod Touch games is their price, as this version of Myst can be picked up for just a few dollars. And for anyone who wants to try before they buy, there is even the option to download a free version of Myst, which allows you to explore the main island without the ability to visit any of the other Ages.

I was sceptical about this release after the DS debacle, and wondered if another port on a mobile device could do any better. Well, quite simply, it could and it did, as this version looks and feels like a portable version worthy of the Myst name. That shouldn’t be a surprise, as Cyan Worlds themselves were involved this time, and their influence shows in a port that has been adapted well for the iPhone and iPod Touch. While it adds no extra functions apart from a limited (and necessary) zoom feature and the utilities already available on the system, that leaves the emphasis where it truly belongs: on the game itself, where it continues to shine even today.

Myst is available at:

This is Myst, pure and simple: a must for any adventure fan who owns an iPhone/iPod Touch, and a good introduction for anyone who hasn’t played this classic game before.

GAME INFO Myst is an adventure game by Cyan Worlds released in 1993 for Mac, PC and PSP. It has a Illustrated realism, Live Action style and is played in a First-Person perspective.

What our readers think of Myst (iPhone/iPod Touch)

3.5 stars out of 5
Average based on 21 ratings
Your rating

This review is not meant for fans who've played the game back when it was groundbreaking. I remember being blown away by it, too. But I never got to play it, just watch my friend,... Read the review » 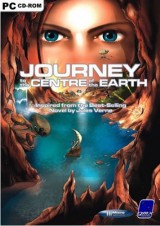 Review of Journey to the Center of the Earth